Floods in Germany, not an unprecedented tragedy

Although the usual narrative of blaming global warming for out-of-control weather events has started, the rainfall that caused the flooding in Germany, Belgium and the Netherlands is far from new and is also typical of the summer period. And by chasing the myth of climate change, the works required to minimise damage are neglected. 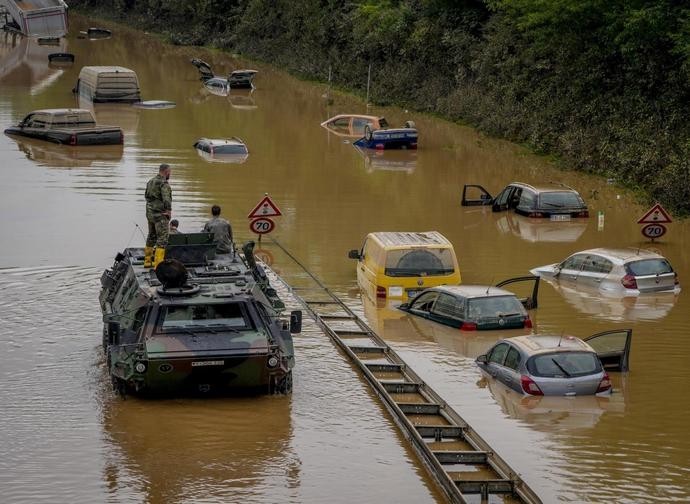 Faced with the floods that swept through Germany, Belgium and the Netherlands on July 14, causing over a hundred deaths, our first instinct was to express solidarity with the people affected.

Immediately afterwards, however, given the dominant narrative, the inevitable question on it’s possible connections to global warming was raised. Massimiliano Pasqui, of the National Research Council’s Institute of Biometeorology, in an interview published in the Corriere della Sera on July 16, under the title “Increasingly violent events and  now impossible to predict“, stated that “Extreme weather events such as the one that occurred in Germany are rare in time but characteristic of the summer climatic evolution of central Europe. What defines the current phenomenon is its exceptional intensity compared to others in the past”. He continues: “We are now witnessing a sudden fluctuation of weather phenomena to the extent that there is a very rapid transition from extraordinarily warm periods to particularly cold and disastrous events. Together with their intensity, this is another sign of the climate change that we have been experiencing for some time”. Furthermore, the interviewer (Giovanni Caprara, President of the Union of Italian Science Journalists) spoke of an “autumn-like phenomenon in the middle of summer”.

I think it would be useful to clarify a few points.

1. Since time immemorial in central Europe, the maximum precipitation typically occurs in the summer (between July and August), not the autumn

2. In Germany, the daily precipitation highs are much lower than in Italy, and the flood of July 14, confirmed this rule, so much so that the highest values that I was able to find, thanks to the help of my friend Sergio Pinna, are those of Kall Sistig (163 mm between July 13 and 15, with 145mm on July 14). However, values of over 100 mm in 24 hours are found quite frequently in the German historical records of the 19th and 20th centuries, so in no way can we speak of unprecedented events.

3. In a scientific paper from 2008, Olga Zolina and co-workers analysed data from a very large rainfall grid in Germany from 1950 to 2004 and found that rainfall intensities were increasing in autumn and winter and decreasing in summer.

4. The message that is now being widely conveyed by the media is that, as it gets warmer, the moisture content in the atmosphere is higher and therefore precipitation events are more extreme. This aspect should certainly be considered in an overall analysis of the phenomena, but in order not to reduce it to slogans, three additional aspects should be considered, which complicate things a little:

(a) Humidity in the atmosphere is concentrated in the first 1000-1500 metres of altitude (the so-called planetary boundary layer) and in order to bring it higher (to 5000-6000 metres and beyond) so that clouds and rainfall can develop, an adequate morphology of the territory and suitable meteorological structures are required, the frequency and persistence of which should be better studied and understood to explain the trends underway;

(b) In the case of Italy, many of the most disastrous floods of the 20th century occurred during ‘cold’ periods. For instance, we remember the Cecina flood of 1930 (peak values of 440 mm in 24 hours), the Sicca d’Erba flood of 1951 (1530 mm in 3 days) and the Genoa flood of 1970 with peaks of over 1000 mm in 24 hours. Moreover, I dread to think how the media would treat similar events today, which will obviously occur again in Italy sooner or later, just as the great floods of the Po will occur again (in the 19th and 20th centuries there were about twenty per century);

(c) Many scientific papers that have come out in recent years show that the climatic phase preceding the present one, i.e. the Little Ice Age, which lasted roughly from 1310 to 1850, experienced flooding events of far greater intensity than those of today’s warm climatic phase.

Further food for thought comes from a recent scientific work by Kelebek and collaborators, who analysed the trend in the climate risk of extreme precipitation (i.e. exceeding the 90th percentile), showing that there are areas where the risk is increasing and areas where it is decreasing. At this point, we might paradoxically think that global warming is to blame for the decreasing risk in some parts of Europe (blue areas in Figure 1) and increasing risk in other parts (red areas in Figure 1). 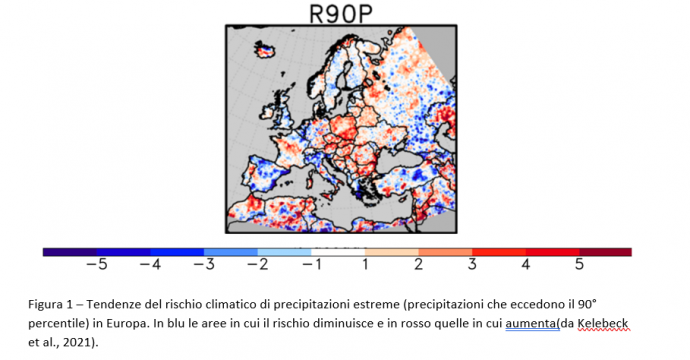 And should readers be illuded: politicians and the media will take them by the hand and, with the blessing of the entire scientific community, lead them to attribute the entire responsibility to the perfidious action of anthropogenic greenhouse gas emissions.

But, in order to allow readers to make up their own minds, I have depicted in the diagrams in Figures 2 and 3 the economic and human losses from flooding events in Europe since 1980. Both diagrams indicate that the losses are stationary and show no particular upward trend over the period under investigation, so the climate is no wilder today than it was 40 years ago. Note also that the two diagrams show significant inter-annual variability, with peak values reached in 1995 for human losses and in 2002 for economic losses. 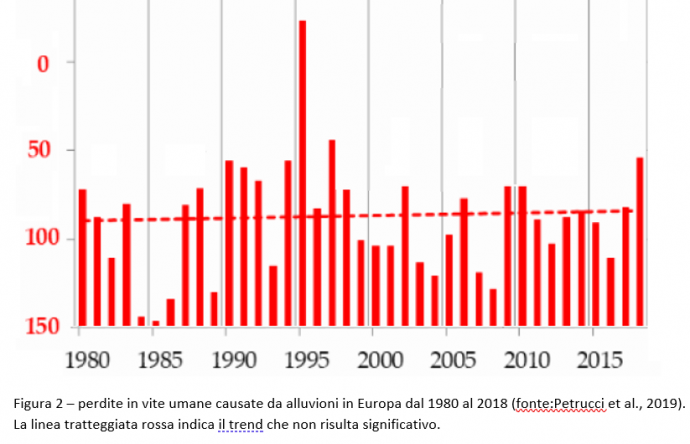 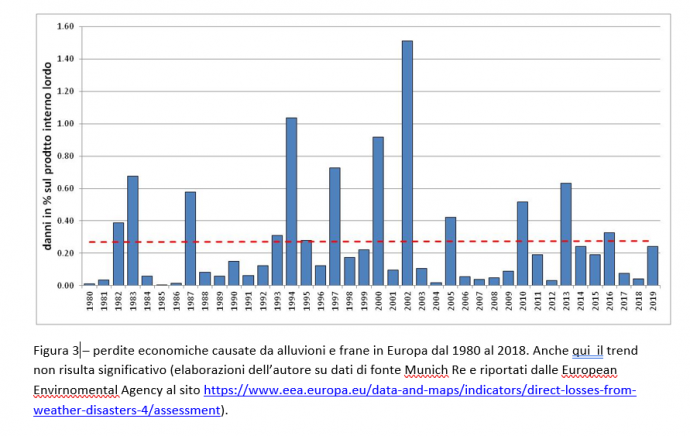 We conclude by recalling that the best way to protect populations and property from flooding events is to evaluate long historical rainfall series (at least 50-60 years) and, on the basis of these, to create adequate defence works (which must then be constantly maintained) and effective warning systems for the population. I hope that these principles will not be sidelined in order to highlight the point that the climate has gone berserk and is behaving unpredictably. In short, today as in the past, the saying “Heaven helps those who help themselves” still applies.