The decision of the Flemish-speaking bishops to make public a 'liturgy' for the blessing of same-sex couples stands in open schism with the Church but is justified via Amoris Laetitia. Now Pope Francis will have to determine whether the Flemish bishops' interpretation of AL and the synodal process has gone too far or not. It is assumed, he will not take a position of 'disarmed neutrality'. 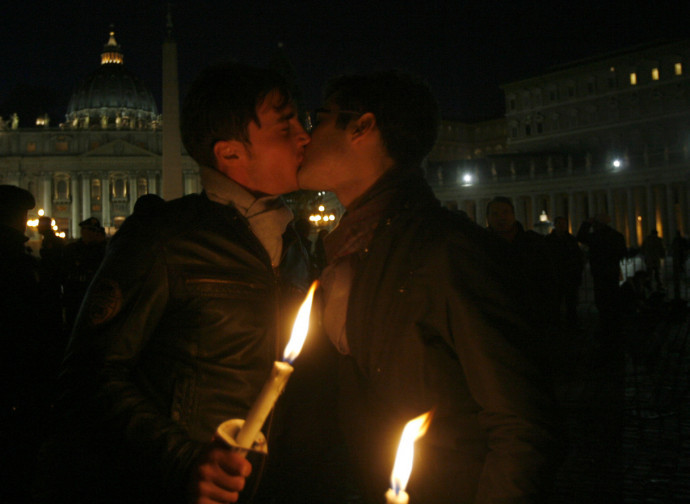 The decision of the Flemish-speaking bishops - Josef De Kesel (Malines-Brussels), Johan Bonny (Antwerp), Lodewijk Aerts (Bruges), Lode Van Hecke (Ghent), Patrick Hoogmartens (Hasselt) - to make public a 'liturgy' for the blessing of same-sex couples comes a week before the next ad limina visit: introductory words and prayer, prayer of couple’s commitment to be mutually faithful, prayer of the community that “they may be strong and faithful”, Our Father, final prayer, and blessing. Obviously overlooking the small detail that this is not a marriage and that the two are not a man and a woman. Moreover, this is an outline which can be modified at will in content and form, in agreement with the couple's spiritual director.

The Dutch newspaper Nederlands Dagblad was the first to report the news. According to the Archbishop of Brussels, as well as President of the Belgian Bishops' Conference, and the other Flemish bishops, the initiative is a response to the frequent requests from same-sex couples, who "ask during pastoral meetings for a moment of prayer to ask God to bless and perpetuate this commitment of love and fidelity". Love and fidelity that by now are labels for a mixed-waste bin, in which every kind of perversion of authentic love ends up; except to then hypocritically remark that the difference must remain clear "with what the Church means by sacramental marriage".

Mr. Willy Bombeek, self-described as “religious and homosexual or homosexual and religious: the order does not matter”, for years in charge of Catholic education in Flanders, and now designated as head of a special section for homosexual couples within the inter-diocesan Family Pastoral Office, responding to I. MEDIA, has no doubt that this liturgy is properly intended 'to bless their union, this love, this fidelity'.

Both statements clash head-on with what the then Congregation for the Doctrine of the Faith had established in the Responsum of 22 February 2021. In fact, the text emphasised that the blessings of homosexual couples, per se, recall the analogy with marriage, even if the words then say something else: “Furthermore, since blessings on persons are in relationship with the sacraments, the blessing of homosexual unions cannot be considered licit. This is because they would constitute a certain imitation or analogue of the nuptial blessing.”

Furthermore, a careful distinction was made between the licitness of blessing individual persons with homosexual inclinations and the illicitness of blessing couples: “The answer to the proposed dubium does not preclude the blessings given to individual persons with homosexual inclinations, who manifest the will to live in fidelity to the revealed plans of God as proposed by Church teaching. Rather, it declares illicit any form of blessing that tends to acknowledge their unions as such. In this case, in fact, the blessing would manifest not the intention to entrust such individual persons to the protection and help of God, in the sense mentioned above, but to approve and encourage a choice and a way of life that cannot be recognised as objectively ordered to the revealed plans of God."

It seems, however, that there is no Flemish translation to express that something is objectively ordered to God's will. In fact, yesterday's original Flemish communiqué (available here in English translation) completely ignores the Responsum and instead seeks support, admittedly rather strained, in § 250 of Amoris Laetitia, which calls for respect for persons with a homosexual orientation; the result would be an unlikely equation: respect for persons=respect for their choices=blessing. For his part, Bombeek estimates that “what happened here fits in very well with the synodal path that the Pope wants with the Church: we went from the bottom, from personal initiative shared with others, to the bishops”. What counts, in short, is the bottom-up itinerary.

Finally, Famille Chrétienne reports the further declarations of an anonymous person in charge of the Flemish Bishops' Conference: '"It is not a declaration against the Vatican [...]. It is a response to the invitation of Pope Francis contained in Amoris Laetitia”, he continues, “considering that the apostolic exhortation ‘coming from a synod’ carries more weight than a declaration of a dicastery”.

Perhaps. In any case, it will be up to the Pope to establish whether the interpretation of AL and the synodal process by the Flemish bishops has gone too far or not. That is assuming he does not take a position of 'disarmed neutrality'. Regardless, the entire journalistic world has greeted - rather positively - the decision to bless same-sex couples as a rift or a challenge launched against the Vatican; terms that, from a Catholic point of view, translate as schism.

While we thought it was the borders of the Rhine that needed guarding, it turns out instead that the stab in the back comes from Belgium. By now, thinking of unity in the Catholic Church is simply a mirage. Blessing homosexual couples? In Rome they say 'No'; in Bologna, with a Roman accent, they answer 'Whatever'; in Flanders they say 'Yes'. And they are proceeding swiftly, shrugging off what has been said and could be said across the Tiber.