After Blessed Michał Sopoćko, the process of beatification in Poland has also begun for Father Jozef Andrasz. He was the first spiritual director of the Saint of Mercy and also her last; he was often mentioned by Sister Faustina in her famous Diary. He was an important figure in spreading the cult of the Divine Mercy. Vice-postulator Father Mariusz Balcerak talks about him. 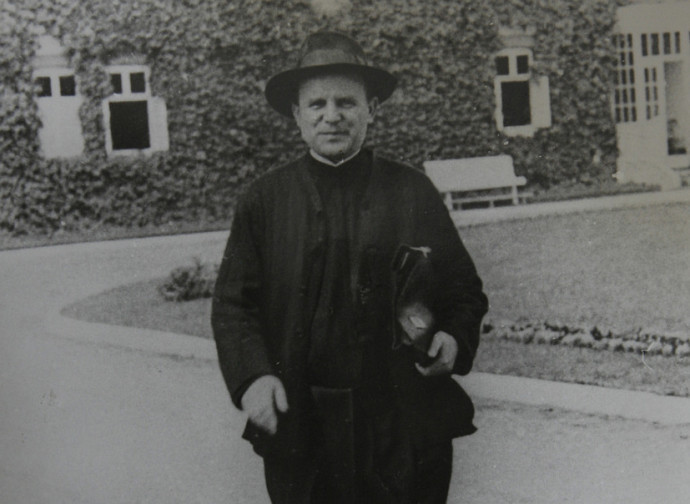 The figure of Blessed Michał Sopoćko, confessor of Sister Faustina Kowalska, is well known, but Father Jozef Andrasz SJ (1891-1963), who played a very important role in the life of the future saint, is much less well known. This Jesuit was her first spiritual director in the novitiate and also her last, in the last year and a half of her life. Sister Faustina also made her last confession to him on the day of her death. This was is the reason St Faustina mentions him 59 times in her 'Diary'.

In the region of Nowy Sacz, in the south-east of Poland, where the Jesuit came from, a movement of lay people has been active since 2015, spreading his cult, making his figure known, and praying for his intercession. The initiative started with a group of men who gathered for the adoration of a copy of the image of the Merciful Jesus, at that time on loan in the diocese of Tarnów.

The diocesan phase of the process of beatification of St Faustina's confessor has recently begun in Krakow, the vice-postulator of which is Father Mariusz Balcerak SJ, a theologian and deputy prefect of the Basilica of the Sacred Heart of Jesus in Krakow. We asked him to speak about Fr Andrasz.

Why did Father Andrasz play such an important role in the life of St Faustina?
To understand this, one must remember the facts. When Sister Faustina came to Lagiewniki, Fr Andrasz was the "quarterly" confessor of the Congregation of Our Lady of Mercy, that is, he came once a quarter to hear the sisters' confessions. Faustina made her first confession to him during the spiritual exercises, in April 1933, before her perpetual vows. She opened her heart to him because she was convinced that this priest would understand her. Already during her first confession, Fr Andrasz assured Sr Faustina that everything she was experiencing came from God: she had doubts about it before that. His words calmed her down.

At that very young age, did Sister Faustina have doubts about her ability to fulfil Jesus' requests?
At first Sister Faustina came to the conclusion that the whole matter, especially painting the image of the Merciful Jesus, was too much for her. Therefore she sought help from Father Andrasz, but he said decisively: "I am not releasing you from anything, Sister, and you are not allowed to evade these inner inspirations...". In this sense his role was decisive. Sister Faustina treated Father Andrasz as an authority and, because she was humble and obedient, she obeyed him. She later wrote: "Now God Himself, through Father Andrasz, had removed all difficulties. My spirit had been directed towards the sun and blossomed in its rays for Himself" and "My wings had been freed for flight and I began to soar towards the blaze of the sun and I shall not descend again until I rest in Him in Whom my soul is drowned for eternity".

What role did Father Andrasz play in the development of the cult of Divine Mercy?
Even during World War II, Father Andrasz, with care and prudence (as the cult was not yet officially approved) started the practice of praying the Divine Mercy among the sisters of Łagiewniki. He encouraged the sisters to entrust themselves to Merciful Jesus and to recite the chaplet. After the war, seeing the enormity of material, spiritual, and moral destruction, he supported the Church in its renewal, giving people hope and encouraging them to believe that Jesus loves and cares for them. In addition, Father Andrasz wrote a book entitled 'Mercy of God, We Trust in You', first published in 1947. In it, he described Sister Faustina's mission and revelations, explained the meaning of the Image and what it means to trust in the Merciful Jesus.

But who was Father Andrasz?
I would say he was a contemplative man in action. Prayerful, immersed in prayer and love for Jesus - but at the same time very active. He was well educated, knew four languages: Latin, Greek, French, and German. He led retreats for religious congregations, especially women's congregations, and for seminarians; he wrote in the ‘Messenger of the Sacred Heart of Jesus’; he was the director of the publishing house 'The Apostolate of Prayer'; he translated several books on spirituality; he participated in the promotion of the cult of the Sacred Heart of Jesus; he was involved in the Marian Society; and he was also engaged in pastoral work. As he was a good confessor and spiritual director, he had a good reputation in Krakow. He was a man of deep spiritual life: he attended Ignatian retreats and held them himself. This 'Discreta Caritas', or prudent love, of which St Ignatius of Loyola speaks, was reflected in him.

Is that why so many people asked him to be a spiritual guide for them?
It is true. Father Andrasz played an important role not only in Sister Faustina's life, but also in the lives of several people, even blessed ones (Blessed Aniela Salawa, Mother Paula Tajber, Sister Kaliksta Piekarczyk, Sister Emmanuela Kalb).