Semi-deserted streets, cafes closed, supermarkets taken by storm, canceled public and private meetings: there is now the Coronavirus panic. But the reality of the facts does not justify this hysteria. The epidemic is very limited and there is currently no prediction of an uncontrollable spread. Being cautious and avoiding unnecessary risks is an obligation, but widespread panic is also a sign of widespread personal fragility. 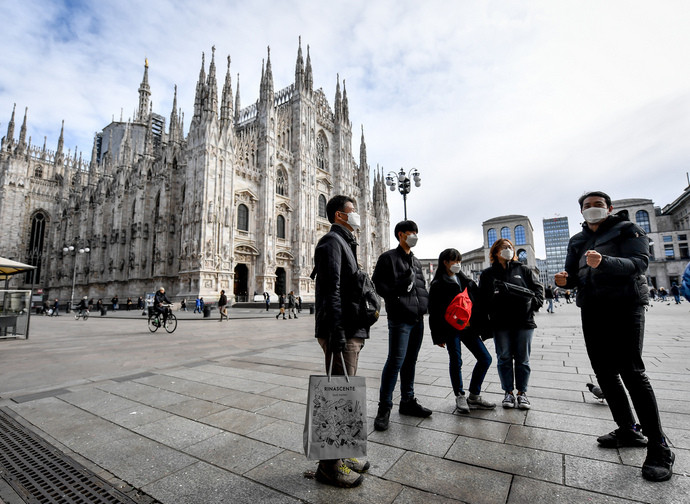 While alarming news is growing about the coronavirus, restrictive measures are now being undertaken throughout Northern Italy. Nevertheless, we would do very well to ask ourselves whether or not the panic - now affecting the entire Italian population - is indeed justified.  With streets semi-deserted, supermarkets stormed like there’s no tomorrow, and all kinds of events being called off, including small work-related meetings, one can’t help but recall apocalyptic scenes from the 1983 film The Day After. And surely it’s only going to get worse.

At any rate, let’s go back to the main issue. Is all this really justified? Certainly not.
There’s a huge difference between taking any matter seriously, such as the spread of a virus in this case, and becoming completely hysterical about it. There is a world of difference between prudential action and succumbing to panic. In the end, both hysteria and panic lead to a series of irrational behaviours that can cause far more harm than the actual problem at stake. Let’s consider: while close gatherings of people are generally being prohibited or discouraged in infected areas, just this past weekend thousands of frightened citizens jam-packed supermarkets and emptied shelves to hoard food. Such sudden overcrowded conditions due to panic were definitely worse than they normally are or should be.

It appears that even symptoms of an ordinary winter seasonal flu are enough to make people fall prey to symptoms of anxiety. What are some of the consequences? Thousands of Italian citizens are requesting throat and mouth swabs and, thus, swabbing materials are becoming scarce and relatively unavailable – especially for those who really run the risk of something more serious and in need of urgent medical supervision. All this is happening while medical laboratories are clogged with work performing mostly unnecessary tests.

In any case, let's take look at the facts as they stand today, starting with the numbers in the most infected country in Europe. So far there are nearly 400 reported cases in Italy, with most cases -- 260  -- registered in Lombardy. I repeat: there are 260 infected person concentrated in a specific region of northern Italy with a total local population of 10 million people (hence infections count for less than 0.002% of all Lombardy residents). In other words, we are talking about a very limited viral outbreak. No doubt, this number will continue to grow in the near future, yet the risk of the coronavirus spreading widely is very unlikely while preventive measures are enforced.

The other issue is that of the potential danger. It is true that coronavirus’s mortality rate is higher than that of a regular seasonal flu, even if percentages and estimates vary according to different sources. Regardless, the real difference is found in the contagions themselves. For example, every year in Italy around six million people come down with with the flu. On average, about 8,000 deaths are attributed directly to influenza and its complications, despite the fact that there is easy access and widespread use of vaccinations. This doesn’t mean that we shouldn’t be taking coronavirus-related infections seriously, yet we must be clear that those who are at the greatest risk are the elderly and those suffering from cardiovascular, respiratory or immunological diseases. This is exactly what reports in these days affirm.

As happens very regularly in such times of panic, we find a number of scientists draw similarities to the Spanish flu. They claim today’s coronavirus has the same death rate. Yet making such claims is totally irresponsible. Recall that the Spanish flu (1918-1920) caused roughly 40 million deaths worldwide (some estimates even speak of 100 million). This figure means that the death rate was 4% (or 10% if we believe the higher estimates).

The Spanish flu had, therefore, a far higher mortality rate and it affected a billion people, around half of the world’s total population at the beginning of the last century. And, we must not forget, that the deadly flu outbreak spread rapidly because of the political, social and hygienic conditions linked to the first World War, conditions that are no longer imaginable in our present day and age.

What certainly causes greater trepidation among the general population, is the fact that there’s no specific antiviral treatment for the coronavirus.  Yet it also true that following the most basic precautions, which have been stated time and again since news first broke, we considerably reduce the risk of becoming infected. This is true, at least in other European countries  which raise no issues of racism like shutting borders to Chinese travellers. They are not taking the same drastic measures as they are in Italy, where there are evident major flaws in its public surveillance systems. For example, just think about  London: it has almost 10,000,000 inhabitants, 150,000 of which are Chinese. But life there in the U.K. capital goes on with absolute normality.

Therefore, in conclusion, it is a good practice to exercise prudence, wisely avoiding unnecessary risks and undertaking some sacrifices for the benefit of the general population . However, the panic being felt these days is absolutely unjustified. The level of  panic is certainly accentuated also by media outlets constantly releasing distressing up-to-the-minute news bulletins which serve more to dupe and scare readers or viewers rather than giving them responsible and adequate information, just as the seriousness of the viral contagion requires. Added to the mix is the distrust generated by politicians whose incompetence is directly proportional to their ability to exploit everything for electoral purposes.

Lastly, the coronavirus panic reveals something else about us. It appears many people are in a very weak position psychologically and emotionally, being lulled into a false sense of security. Suddenly, when faced with an unseen threat, the sky falls upon them and their safe zone collapses. The fact is a good number of us falsely believe we can control every aspect of our lives, deluded by what technology and science has to offer in terms of certainty. And yet even a tiny invisible virus is all that is needed to expose our misery and helplessness. The real problem for many such people is that they no longer have the certainty and conviction that – after having done all that is right and possible according to their own abilities --  their lives ultimately lie in the hands of God.