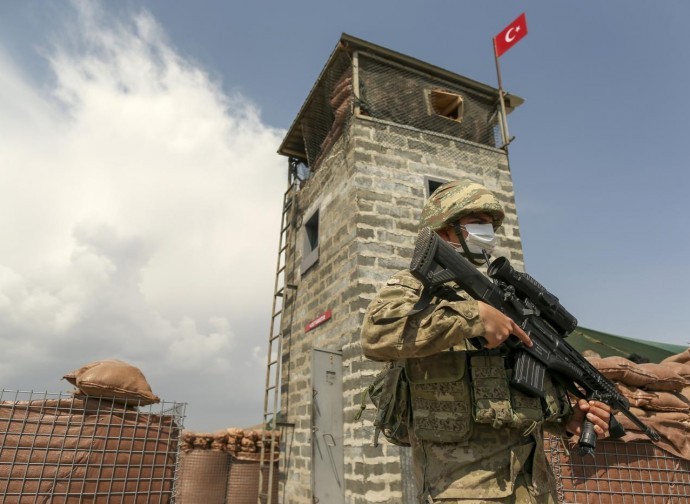 The first was the Hungarian wall on the border with Serbia, erected in 2015 to stop the flows through the Balkans that brought almost two million Asian illegal immigrants to Europe.

The EU harshly criticised Orban’s initiative but then seems to have changed its mind by supporting and financing other walls. For example, the triple-grid fence that Spain has erected on the borders with the enclaves of Ceuta and Melilla, Spanish territories on the Moroccan coast. Or the one erected last July by Lithuania on the border with Belarus, to stop the flow of African and Middle Eastern migrants entering the Baltic country through the former Soviet republic. “A barbed-wire fence is the first step,” Interior Minister Agne Bilotaite explained. “Next we will proceed with the construction of a physical barrier”. That is, a real wall 550 kilometres long. The Finnish government had contributed by sending agents and vehicles to Latvia and Lithuania to help curb illegal immigration on the border with Belarus, and the EU border agency (Frontex) had called on member states to help Latvia and Lithuania with border patrols.

The President of the European Council, Charles Michel, said that Lithuania’s borders are Europe’s borders. “The EU has decided on sanctions against Belarus and continues to fight for the promotion of our values”, Michel continued, adding that “the Belarusian authorities use irregular migration to put pressure on the EU and Lithuania”. EU Interior Commissioner Ylva Johansson stressed that among the illegal immigrants “most are Iraqi, but there are also Congolese and Cameroonians” who pay “15,000 euro to cross the border”. Figures that in Iraq and Africa represent a fortune.

On 25 August, Poland also began building an anti-migrant wall on the border with Belarus: a 2.5-metre high fence that will have the same features as the one erected by Hungary on the border with Serbia in 2015, according to Polish Defence Minister Mariusz Blaszczak. An increased commitment of the army, which already deploys 900 soldiers alongside border guards along the 400-kilometre border, has been confirmed. According to Warsaw, 1,935 people tried to enter its territory last week: 1,175 were rejected and 760 ended up in migrant centres. The paradoxical aspect is that the EU seems to support the policy of walls without hesitation, but only shows concern for the state of Afghans, who are now the focus of attention due to the events in Kabul.

The European Court of Human Rights (ECHR) has ordered Poland and Lithuania to provide assistance and care to 32 Afghans stranded in no-man’s land on the Polish-Belarusian border, and to do the same for 41 ethnic Kurdish Iraqis stranded for days in limbo between Lithuania and Belarus. The Strasbourg judges decided to impose until 15 September on Warsaw and Vilnius a series of “urgent measures”, in particular to provide the two groups with food, water, clothes, adequate medical care, and if possible temporary shelter. The ECHR (which is not an EU body) has specified that this decision does not require the two countries to let these people enter their territory. The grotesque aspect is that Iraqi Kurds and Afghan illegal immigrants have always tried to enter Europe illegally, as economic migrants, and it is certain that those in the no man’s land between Poland and Belarus certainly did not flee from the triumphant Taliban in Kabul, but had left their country long before.

In recent days, the construction by Greece of a 40-kilometre barrier on the border with Turkey, equipped with a surveillance system, has attracted more criticism because it has been presented as hostile to Afghans in particular. In reality, Greece, which has long been driving boats loaded with illegal immigrants back into Turkish waters, fears new waves of illegal migrants, not only Afghans, but also Syrians, Pakistanis and Asians, driven by the Turks towards the Greek land border to feed the Balkan route. “We cannot passively wait for an eventual impact”, said the Minister for Civil Protection, Michalis Chrisochoidis, assuring that “our borders will be inviolable”.

Today, Italy is the only European country exposed to illegal migratory flows that does not adopt measures to repel immigrants and does not erect ‘walls’, not even at sea where, with the deployment of the navy and coast guard, it would be quick and effective to intercept and escort back dinghies and boats. On the contrary, the attention of the Minister of the Interior, Luciana Lamorgese, seems to be aimed at increasing the already massive flows (37,260 illegal immigrants landed since the beginning of the year, compared to 17,564 last year and 4,862 in 2019) by welcoming in Italian ports all the ships of foreign NGOs.

Considered by many to be hostile to Ankara, the Greek initiative to build the wall has instead kicked off after Prime Minister Kyriakos Mitsotakis’ talks with Turkish President Recep Tayyip Erdogan. Turkey has long since begun construction of a 295-kilometre anti-migrant wall on the border with Iran, which is crossed mostly by Kurds and Afghans. Local sources report that the wall is built of three-metre high and two-metre wide blocks, each weighing seven tonnes, and extends from the border of the eastern province of Van to Dogubayazit in Agri province and down to Yuksekova in Hakkari province. It is also supported by 110 kilometres of trenches and 103 smart surveillance towers with fibre-optic systems.

As AsiaNews reported in July, quoting the Turkish daily Cumhuriyet, Lake Van in eastern Turkey has become a “sea of refugees” and their numbers in the country have reached unsustainable levels, justifying the anger and concern of the population. Hence the clampdown imposed by the authorities in Ankara, who have recently detained several groups of migrants along the eastern border, effectively preventing them from entering the country illegally. Emin Bilmez, governor of the eastern province of Van, emphasised that “this year alone we have caught and prosecuted more than 55,000 irregular migrants at our borders”. These are joined by 783 traffickers who facilitate illegal crossings, 300 of whom have been arrested. These figures refer to the period from January to July 2021; in the whole of 2020, 599 traffickers were prosecuted, which is less than the number recorded in the first six months of the current year.

Turkey is also the country hosting the largest number of refugees and illegal migrants in the world: 3.6 million Syrians and an estimated 320,000 of other nationalities.