Europe asks us to ration our gas. The (un)happy degrowth is here

Reducing gas demand by 15% from 1 August 2022 to 31 March 2023, with possible exceptions of 7% cuts up to exemption. After the imposition of sanctions on Russia and the reduction of the gas flow from the East, Europe is moving towards “energy degrowth in solidarity”, especially towards Germany, which suffers most from the Russian gas cut. Member states must update their energy plans and report to the Commission every two months. Meanwhile, we will be more dependent on liquefied gas from the US. As well as on solar panels produced in China. The environmentalists of Fridays for Future are not satisfied with this and are threatening all-out occupation of schools, to “end the fossil economy internationally”. 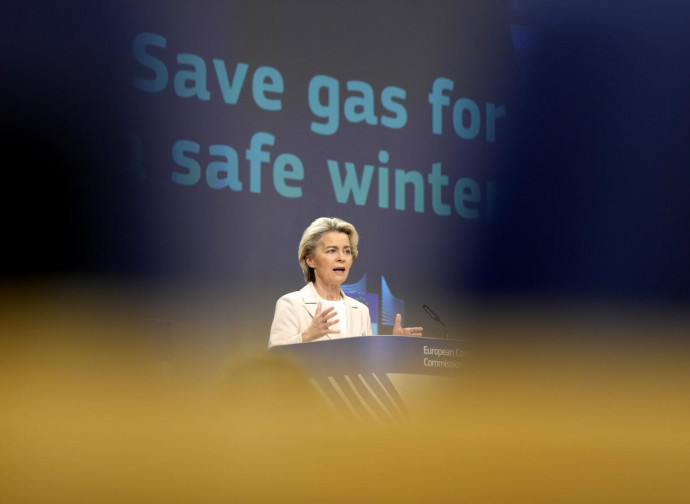 EU governments agreed on a common position, with only Hungary voting against, on rationing the use of Russian natural gas for this winter, in order to prevent any further cuts. The EU energy ministers approved a new reduction plan of the Council on coordinated measures to reduce demand for Russian gas, the draft of which was proposed by the Commission on 20 July, aimed at reducing gas demand by 15% from 1 August 2022 to 31 March 2023, with exceptions up to a 7% cut or exemption.

After the launch of economic sanctions against Russia, Europe is moving towards a "solidarity energy degrowth", especially towards Germany, which suffers from Russian gas cuts much more than Hungary, Austria and Italy, but also an economy degrowth, as the latest International Monetary Fund report predicts: Europe's growth could slip close to zero in 2023, should the risks linked to the Russian gas stop and the spurt in inflation materialise. The Commission, after yesterday's decision, will also have the option of declaring, after consulting the member states, a state of 'Union Alert' for reasons of security of supply and imposing on them a mandatory reduction in gas demand. A state of Union alert will be triggered in the event of a substantial risk of a serious gas shortage or exceptionally high demand. Member states must update their energy plans and report to the Commission every two months. Countries requesting gas supplies by invoking the solidarity principle will be required to provide proof of what they have done to reduce demand domestically. The legislation provides for voluntary measures at national level to reduce gas consumption and, if the savings are not sufficient, the activation of solidarity actions by the 27 member states.

"I know that the decision was not easy, but I believe that in the end everyone understood that this sacrifice is necessary. The adoption of the gas reduction proposal in record time has undoubtedly strengthened our common energy security", said Czech Industry Minister Jozef Sikela after chairing the meeting in Brussels. The suggested measures echo those of the International Energy Agency (IEA), which called for more sacrifices, and include measures such as setting air conditioning systems to a higher temperature in summer. Starting in October, national governments are expected to save gas by asking households to turn down their thermostats by 1°C and by requiring a reduction in heating in public buildings, offices, and commercial buildings. In the event of a severe gas shortage, industry will be cut off first, although essential services, such as electricity generation, are likely to be prioritised and preserved. "Households are protected consumers, heating [for] gas-fired homes, is safeguarded, but everyone can and should save gas and we will continue to promote the ideas set out in the EU energy saving plan and ask all member states to launch awareness campaigns to encourage gas saving and responsible behaviour," said EU Energy Commissioner Kadri Simson.

The decision taken yesterday was only possible thanks to the intelligent and serious work of the government led by the conservatives in the Czech Republic, a clear demonstration of how centre-right governments are neither unreliable nor dangerous anti-Europeans. Many European countries, including Portugal, Spain, Greece, Malta, Ireland, the Baltic States, Poland, France, and Hungary, had expressed their opposition to the Commission's proposal until a few hours before the meeting. "With the numbers and the rules established" across Europe, "we should save around 7% compared to the annual average of the last five years. This was said by the Minister for Ecological Transition, Roberto Cingolani, commenting on the agreement reached between European ministers on the EU emergency plan to cut gas supplies, adding that Italy, thanks to the diversification of its gas suppliers (Azerbaijan and Algeria in particular) has reached 71% stocks.

The European Commission continues to call on countries to switch more quickly to other energy sources for power generation, first and foremost renewables (including solar panels), but also coal, nuclear and oil. Do we leave Russian gas to throw ourselves at the mercy of the US and China? The US could exceed and even triple its pledge to supply Europe with 15 billion cubic metres of LNG (liquefied gas) this year, obviously at a price 40-50% higher than Russian gas. Europe does not even care about the growing Chinese monopoly in photovoltaic panels and their components; the serious alarm of the past few days is from the IEA.

In the meantime, the young loutish followers of Greta Thunberg's 'green happy degrowth' are publicly threatening all-out occupation of schools and universities around the world from next September to December, inspired by the Paris '68 uprisings, in order to “put an end to the fossil economy internationally”; this is the appeal-manifesto End Fossil: Occupy! In short: we will be cold, with less productive energies, chained to China and the USA, with loutish youths blocking education and a Commission that, after the European Court of Auditors' resounding rejection of the RePowerEu Plan (only 20 - not 210 – billion euros available), is less and less credible.