“EU under the thumb of Big Pharma over new pandemic”

"It’s the Pharmaceutical companies who are dictating what agenda the European Parliament should follow by forecasting future pandemics and imposing vaccines, already in production, but without the EMA’s approval". The independent MEP Donato raises the alarm, over implicit admissions and demands on the EU Commission: "The responsibility for the adverse effects lies with the states because the vaccines were tested in haste; no tests were conducted to prevent contagion; flexibility requested to enable the sale of vaccines even without an emergency" 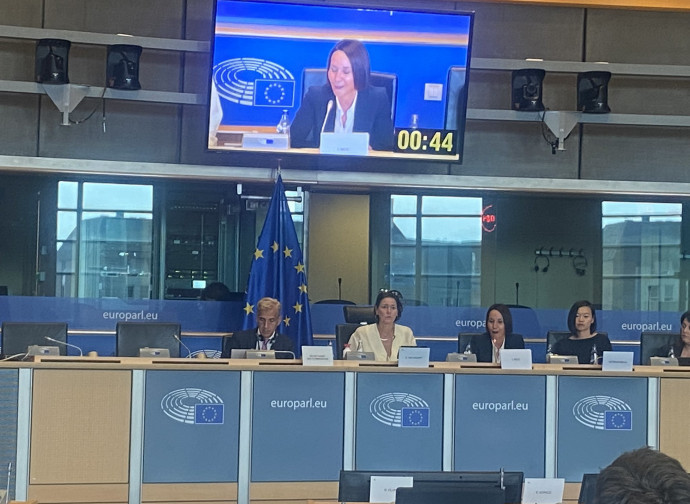 The thought of future pandemics, using unapproved vaccines, already in production, and the European Union’s agenda being dictated to by pharmaceutical companies. This is the disconcerting picture that emerged from the last Covid commission which took place within the European Parliament’s jurisdiction on September 5. Francesca Donato, an independent MEP in Brussels and member of the commission that listened to the vice-presidents of Gilead, Astrazeneca, Sanofi and Moderna, speaks to the Daily Compass about the disturbing proposals and worrying prospects.

What emerged from the commission?
First of all, it was made clear that the companies are not liable for adverse effects.

It was an open secret...
It was confirmed by the vice-president of Moderna. The rationale is this: they cannot be held responsible for adverse effects because they had to carry out a quick trial.

Do they admit this?
Of course, they more or less said: “We were rushed into delivering the product, we could have done longer tests with respect to efficacy and safety, but we needed time, and since we didn't have this time because the governments pressed us to have the vaccines right away, we demanded a clause exempting us from any claims for compensation”. It’s very clear, isn’t it?

An indemnity?
The dramatic thing is that the one who negotiated with the companies was the Commission, only to then attribute the responsibility to the individual member states.

If this topic has been discussed, does it mean that adverse reactions have been admitted?
No, or rather: the subject came up because my colleagues asked many questions precisely on this topic. The companies' representatives tried to avoid the subject and not give full answers. Then, in the end, the reply was there are adverse effects, but the benefits outweigh the risks.

What did they find out about the tests?
That they never tested for efficacy in preventing infections.

But how come?
The trials were aimed at reducing the number of hospitalisations and deaths, not protecting against Covid. A specific question was asked: "Have tests been done to evaluate Covid prevention?" The answer was an implicit admission: no.

And what did you ask?
I asked AstraZeneca about the Italian cases of Camilla Canepa and Stefano Paternò.

What did they reply?
They knew these two tragedies very well; they expressed great sorrow for the deaths, but their line is to say that thrombosis and thrombocytopenia are greater in Covid cases. An absolutely evasive answer, which expresses a certain bad faith, first of all because one does not choose to catch Covid, unlike the vaccine, and then, if anything, we are talking about untreated Covid...

...On patients who are certainly not their age...
It is an answer that expresses bad faith and instead highlights a high risk, despite the fact that they propose it for all age groups. It’s chilling.

So, will vaccines still be talked about?
It’s all they talk about. It was impressive to hear the Sanofi executive announce the release of a new universal booster.

In what sense?
That it should cover all other vaccines and all possible variants imaginable. Whatever vaccines you've had before, it doesn't matter: this one covers them all.

But how did the Commission react?
I was struck by this ease with which these big pharmaceutical companies basically dictated the agenda to us, who are the legislator.

In what way?
By asking us to strengthen the pharmaceutical research sector on vaccines and to prepare for the next pandemics, as if we all already knew that every week there is a new virus ready to come onto the scene.

Please elaborate...
Reference was made to monkey pox, heavy influenza, as if a new pandemic was on its way. Companies are asking for fast-track flexible procedures to obtain authorisations for the use and sale of vaccines even when there is no emergency. It is truly baffling to see how they are able to dictate the agenda without the Commission opening its mouth.

What else have they asked for?
More investment at European level in biomedicine, a single purchasing centre, which is already part of the European project. In short, I can confirm that the impression one gets is that we have entered a phase in which these vaccines are automatically produced and sold. This is well demonstrated by the case of this new universal booster.

Meaning?
The EMA's authorisation has not yet arrived, but it has already gone into production. There are players in the market who are not producing in a vacuum, but with a view to selling. It's just that people are no longer willing to be vaccinated so easily, many are also fed up, others have been burnt by adverse events; so, do you know the only way to secure the trade of these products?

What is it?
Make them necessary. And that is why the green pass has been extended and will come back into play again. Coercive means will still be necessary to convince people to be vaccinate again.