While Russian military operations in Ukraine are proceeding, Mariupol is about to fall, and pressure is high across the east of the country, the flow of gas to Europe is steady and orders are even increasing. The EU countries are engaged in economic warfare against Russian aggression, but they continue to buy gas from Moscow and expose themselves to economic reprisals. 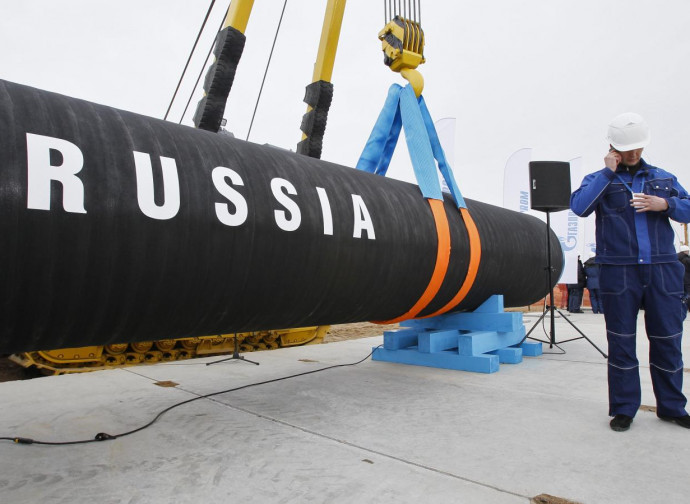 The confrontation on the battlefields in Ukraine escalated after Ukrainian troops defending the centre of Mariupol rejected the Russian call to surrender the port city.

The intensification of the Russian bombardments on this city certainly pursues military objectives since one of the priority strategic objectives of the Russian offensive is to establish a solid geographical continuity between the Donbass and the Crimea by wresting from Ukraine the outlet to the Sea of Azov. This objective is now within reach with the fall of Mariupol, which in the absence of any sensational news should be a matter of days.

Also the missile bombing of the military training centre in Nova Lyubomyrka, in the Rivne region, in the north-west of the Ukraine, pursues strictly military objectives. The same goes for the raids that in these last days have seen Kalibr, Iskander ballistic missiles, and, on a couple of occasions, Kinzhal hypersonic missiles (which are in fact impossible to intercept because they hit their targets at speeds of over 10,000 kilometres per hour) destroy air bases, barracks and military depots west of the Dnepr river. These are the bases where foreign volunteers who have come to fight for Kiev and the huge quantities of weapons donated to Ukraine by the USA and NATO are based.

The bombing of Kiev and Odessa, where uninhabited buildings have been hit by fire from Russian ships, seems to have a demonstrative value aimed at exerting strong pressure on public opinion to induce the Ukrainian government to accept Russian demands for a ceasefire and a peace agreement that offers Moscow the guarantees it has long been asking for. Negotiations are continuing, and although Ankara has given comforting news that positive announcements are imminent, yesterday the teleconference talks between the Russian and Ukrainian delegations went on in two consecutive rounds.

Swiss President Ignazio Cassis said yesterday that he hoped "the guns would soon fall silent" and that Switzerland was ready to mediate or host the talks. However, it is unlikely that the Russians would accept as a mediator a nation that, renouncing its proverbial neutrality, has imposed sanctions on Moscow. Paradoxically, in a climate of war and increasingly strong sanctions imposed on Russia, but not on Russian gas, the Bloomberg news agency yesterday reported that orders for deliveries of Russian natural gas to Europe via the Nord Stream link are increasing, while flows through Ukraine remain stable. So although Berlin has not activated the new Nord Stream 2 pipeline, its predecessor is working at full capacity, as are the pipelines running through the war-torn Ukraine, which no one has any interest in hitting. In fact Europe, which attacks Putin and condemns the Russian invasion by imposing increasingly heavy sanctions, continues to make its economy survive on Russian gas.

In this regard, yesterday the German Federal Statistical Office announced that the producer price index for industrial products in Germany rose by 25.9% in February 2022 compared to February 2021. This figure is even more alarming given that it predates the conflict, as the recent price increase following the Russian attack on Ukraine has not yet been included in the results of the survey that closed on 15 February. This means that in Germany, and even more so in other countries such as Italy, industrial products are becoming uncompetitive on the markets due to the cost of energy. A situation that is already leading to the loss of many jobs and that promises to be a catastrophe for the whole of Europe, but which could escalate if Moscow decides to block the flow of gas to Europe in retaliation against the military support offered by the EU and NATO to Ukraine.

On the other hand, those who have chosen to become "belligerent" must expect Russian threats to materialise, certainly not with military action, but with probable cyber attacks or blocks to energy supplies, considering that on average European nations estimate that it will take at least two or three years to replace Russian gas supplies. Such a context also obliges Europe to support and encourage a rapid negotiated solution to the conflict. On the other hand, Russia does not intend to destroy or occupy the whole of Ukraine, for which the forces deployed by Moscow would be totally insufficient.

The objective seems to be to surround the Kiev army deployed largely in the east and isolate the most important cities to induce the Ukrainian garrisons to surrender while trying to limit losses among the military as well as among civilians. One only has to look at the map of the Russian invasion to see that Moscow's troops are moving along the Ukrainian borders and coastline without entering the centre of the country. Russia may therefore be close to achieving its priority military objectives, such as the conquest of Mariupol and the entirety of the Donbass territories in the provinces of Donetsk and Luhansk, necessary to sit at the negotiating table with a position of strength.

No one has a crystal ball, but such successes on the ground seem within the reach of Russian troops and, combined with continued pressure on Kiev, Kharkiv, Sumy and Odessa, could reasonably lead to the necessary conditions for an agreement by the end of March.