Erdogan intends to restore the Caliphate

Today Hagia Sophia has once again been transformed into a mosque, as was Erdogan’s intention from the beginning of his career. But where does this policy lead? Erdogan makes no secret of his plan to restore the Ottoman Empire. He has already presented himself as the protector of the mosques of Jerusalem. What if one day he does restore the Caliphate? 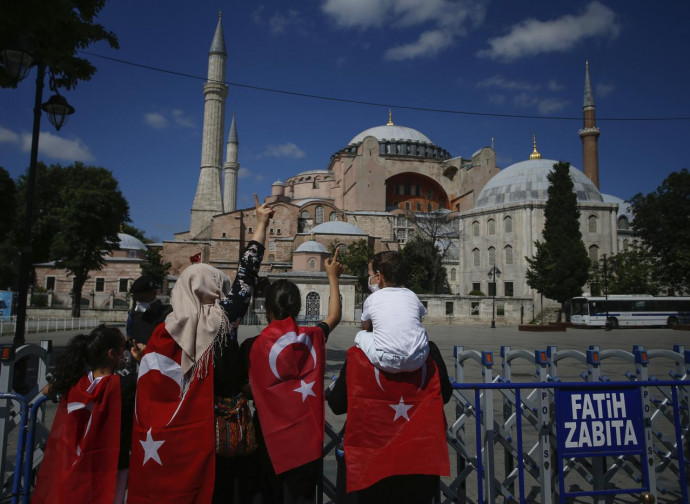 If anyone still harbored any doubts about Sultan Erdogan’s intentions to restore the Ottoman Empire, the decision of the Turkish supreme court that paves the way for the reconversion of Hagia Sophia in Istanbul into a mosque ought to make clear once and for all, the reality of the threat represented by the Muslim Brotherhood.

Ever since the foundation of the Brotherhood in Egypt in 1928, its objective has been to re-establish the Caliphate abolished by Ataturk in 1924. Over the years – now almost a century later – this aspiration has found its full impetus and political strength in Turkey in the Islamism embodied by Erdogan. The West has not been able to immediately recognize the true nature of this Islamism only because of its own cultural decadence. And yet Erdogan said it very clearly and unequivocally even before climbing the political and institutional ladder which brought him to the supreme head of the fundamentalist and liberticidal regime which he has established today: “The minarets are our bayonets, the domes are our helmets, the mosques are our barracks.” To say this, he even faced imprisonment. But the West did not give sufficient credit to his clarity, to the point that Europe and the United States even favored his rise to power. It is useless now to cry over spilt milk in front of the “monster” that is now fully showing its true colors.

Immediately after the court’s decision, numerous demonstrators rushed to the square in front of Hagia Sophia to celebrate, raising their arms with the four fingers of “anger,” a gesture typical of the Moslem Brotherhood that has been repeatedly used by Erdogan. Thus Islamism declared its challenge to the whole world, as if to say, “We are back, and we will conquer,” a declaration of war that has stirred the hearts of millions of followers of the Brotherhood that has now spread with deep roots to every continent. Thus, no more searching for dialogue and peaceful coexistence between religions and diverse cultures, but rather submission and dominance, starting with Hagia Sophia, the symbol of the closing of the historic chapter of the wars with Christianity, a chapter which Erdogan has instead reopened, simultaneously making declarations (in Arabic) about the Al Aqsa mosque in Jerusalem, as the culmination of the reconquest of the Middle East of Ottoman memory.

Does what has happened in Syria, Egypt, Tunisia, and Libya, to cite only the most striking cases, still tell us nothing? How should the Islamist military expansionism led by Erdogan, who even uses jihadist terrorism without scruples, be opposed? The next step will be the official reconstitution of the Caliphate: Sultan Erdogan I and his successors will not stop.