Gender theory seriously contradicts the nature of man and has serious implications for the proclamation of the foundations of the Christian faith by undermining the role of the father, the mother, marriage, and the relationship between children and parents. Many believers and bishops feel that a document setting out the Catholic Church's vision is urgently needed. 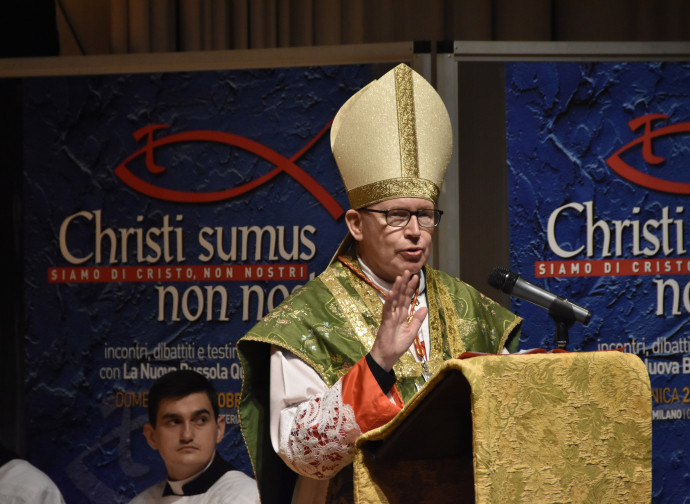 The term gender refers to the two categories, male and female, into which human beings and most living beings are divided according to anatomical and physiological differences in reproductive organs and secondary sexual characteristics. The term gender was introduced in the 1950s. It refers mainly to the social roles of men and women. The idea is that in the past, the role (gender) of men and women was imposed by society. In today's Western society, with its hyper-individualism and the autonomous ethics associated with it, it is assumed that the individual does not accept a role imposed by society, but chooses his or her own gender.

This role that the individual chooses for himself is called gender identity. The individual can choose a gender independently of his or her biological sex. Based on one's sexual orientation or preferences, the individual can decide to be heterosexual, homosexual, lesbian, transgender or non-binary. Non-binary means that a person does not yet want to be either male or female. A transsexual is a person who is convinced that their gender identity does not coincide with their biological sex. For example, a man may feel he is a woman, while biologically he is a man, or vice versa. When someone is unhappy and struggles with their biological sex for this reason, it is called gender dysphoria. A transgender person is a transsexual who intends to change their biological sex to that corresponding to their gender identity or has already done so through medical treatments and surgical procedures. Alongside gender theory, there is the so-called queer theory, according to which there are no fixed gender identities, but fluid boundaries between them. For example, there are young people who sometimes have relationships with someone of the same sex and other times with someone of the opposite sex, depending on the feelings and mood of the moment.

International organisations, such as the United Nations, promote the implementation of gender theory globally in companies, governmental organisations, and healthcare institutions. They also do this through educational programmes that encourage children and young people from primary school onwards to reflect on the gender identity they want to choose or are attracted to. In children who are not sure whether they want to become transgender, the administration of a hormonal agent, triptorelin, can slow down the onset of pubertal development with the aim of giving the child time to reflect on this question. First of all, this hormone can cause serious side effects. Furthermore, it should be remembered that adolescents and teenagers often doubt their gender identity for some time. However, in most cases gender dysphoria passes with no problem. Moreover, many transgender people regret changing their biological sex. Especially after a surgical change of biological sex, however, there is no going back.

The origins of gender theory can be found in radical feminism. In the second half of the 1940s, Simone de Beauvoir wrote that one is not born a woman but becomes one, i.e. through the classical role of woman imposed by society. According to the radicalised feminism of the 1960s and 1970s, society imposed on the married woman a role as an instrument of reproduction and education. Contraception could free her from this role. The feminist Firestone wrote in 1970 that, once freed from the tyranny of their reproductive biology, women would be able to play a role of their own, independent of their biological sex. This liberation also implied the dismantling of the family, the social unit organised around reproduction, and the subjugation of women to their biological destiny. It also demanded the freedom of all women and children to do what they wanted sexually. After the last revolution of feminism, she believed that a society would emerge in which all forms of sexuality would be permitted and allowed.

In the 1960s, the introduction of the hormonal contraceptive pill largely 'liberated' women, it was thought, from their reproductive biology. This set the stage for the total separation of gender from biological sex.

The basic idea of gender theory, i.e. that the roles of men and women (gender) can be completely separated from biological sex, derives from the dominant view of man in our current society. It generally limits the human person to his or her consciousness (the mind), with its ability to think and make autonomous decisions, which was gradually made possible within the framework of evolution by the development of very complicated biochemical and neurophysiological processes in the brain. According to this view of man, the body would only be the means by which the person (restricted to consciousness) can express himself. This gives the human person a very broad right to dispose of their body, including their biological sexuality.

On the contrary, the Catholic Church teaches that, “though made of body and soul, man is one” (Gaudium et spes, No. 14). The body, including the reproductive and sexual organs, is not something secondary or accessory, but belongs to the essence of man and therefore, like man, is an end in itself and not merely a means that man can use for any purpose. John Paul II writes in his encyclical Veritatis splendor (No. 48) that the human body is not a raw material with which man can freely do as he pleases.

Man and woman share the same soul and therefore have the same human dignity. However, they are physically different in the sense that they are complementary to each other through their biological sexuality. This complementarity concerns their mutual role in reproduction. Incidentally, man and woman are also complementary in terms of their bio-psychic differences. As already mentioned, the body essentially belongs to the human being and so does biological sexuality. Being male or female is therefore part of their being and cannot be detached from it.

Of course, the (gender) roles of men and women can change under the influence of socio-cultural factors. Until the 1950s, it was believed in many countries that women had to leave their jobs when they got married. Moreover, they were often not allowed to open a bank account without their husband's consent. This is no longer the case in Western countries, due to the changed socio-cultural developments that have taken place since then. Women can also become managing directors in our times. That this is impossible for her is not written into her biological sexuality.

However, it is not possible to completely separate the social roles of men and women from their biological sexuality. The essential aspects of being male and female, of being husband or wife, of being father or mother, and of being son or daughter are all anchored in being created in the image and likeness of God, that is, in the essence of man, and thus in God's order of creation.

Gender theory has serious implications for the proclamation of the foundations of the Christian faith, confusing and thus undermining the role of father, mother, spouses, marriage, and the relationship between children and parents. God has revealed himself to us as Father. But how to proclaim him as such, if the concept of father is blurred? Eroding or changing the meaning of words like father, mother, marriage, fatherhood, and motherhood also makes it difficult to proclaim faith in Christ as the Son of God the Father, who became man, and in Mary as the bride of the Holy Spirit. The gender theory also undermines the analogy between the relationship between Christ and the Church, on the one hand, and that between husband and wife, on the other (Eph. 5:21-33). On this analogy is based, among other things, the fact that the priest must be a man because he represents Christ, the bridegroom, in person and thus also addresses the Church as his bride. Separating gender from biological sex would make it irrelevant whether a priest is a man or a woman.

The papal magisterium rejects gender theory, but has so far only done so in a cursory manner. In his Christmas address to the curia on 21 December 2012, Benedict XVI noted that in the context of gender theory, man "denies his own nature and decides that it is not given to him as a pre-established fact, but that he himself creates it". Pope Francis has also said several times that gender theory is incompatible with human nature and the Christian view of gender difference. In the encyclical Laudato si', he emphasises that a true ecology also requires respect for sexual gender difference: “Learning to accept one's body, to care for it and to respect its meanings is essential for a true human ecology. Appreciating one's own body in its femininity or masculinity is also necessary in order to be able to recognise oneself in the encounter with the other who is different from oneself. In this way, it is possible to joyfully accept the specific gift of the other, the work of God the creator, and be mutually enriched. Therefore, an attitude that claims to erase sexual difference because it no longer knows how to confront it is unhealthy” (No. 155). See also Amoris laetitia, No. 56.

In an address to the participants of the plenary session of the Pontifical Academy for Life on 6 October 2017, he warned the audience against the risks of the ideology of gender. "The biological and psychic manipulation of sexual difference, which biomedical technology lets us glimpse as being completely available as free choice - whereas it is not! - thus risks dismantling the source of energy that nourishes the covenant of man and woman and makes it creative and fruitful”.

Many of the faithful, including many bishops and entire episcopal conferences, consider it of great importance - given the speed with which gender theory is spreading and being put into practice - that an authoritative papal document, such as an encyclical, detailing the Catholic Church's view on gender theory be issued soon.