Egypt and Turkey challege each other for the Mediterranean

Egypt opposes Turkey’s hegemonic designs in the Eastern Mediterranean. The challenge is also religious: Hagia Sophia is reconverted into a mosque, while the monastery of Saint Catherine is being restored by Al-Sisi 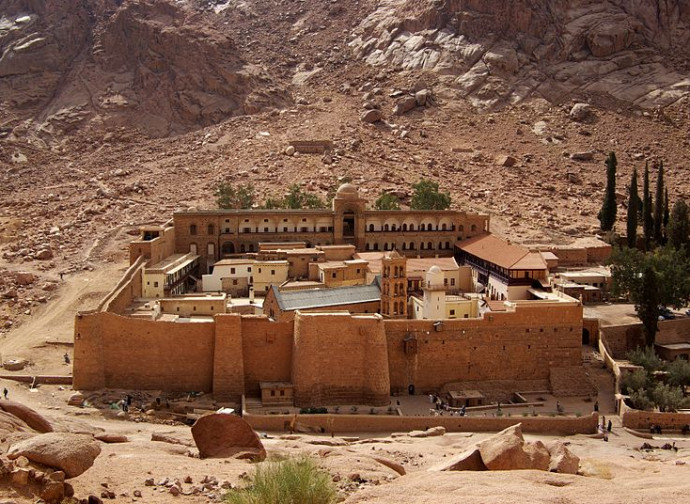 When Erdoğan announced his dream of converting the Basilica of Hagia Sophia to its former status as a mosque, it was expected that there would be reactions from the international community that would serve as a measure of his foreign policy. Among the few voices that were outside the choir was that of Cairo.

Already on July 21 the Egyptian government announced, in response to Erdoğan’s decision, that it wants to allocate 2.5 million dollars to restore the monastery of Saint Catherine in the governorate of southern Sinai, one of the most ancient monasteries of the world and a point of Christian reference. And certainly Syria has also distanced itself from that process, that is a continuous offense to the Christian West, by announcing the construction of a church called Divine Wisdom that will reproduce Hagia Sophia in reduced dimensions.

The immediate Egyptian reaction to the case of Hagia Sophia is not trivial. It is a clear move on the Mediterranean chessboard that seems to interest Italy less and less. And Prime Minister Mostafa Madbouly, in open hostility to Turkey, has thus declared that he wants to invest in Christianity, thereby giving a very precise signal. In recent days he even visited Saint Catherine in order to meet the monks of the Order of Saint Catherine. Madbouly announced that the work would begin immediately: restoration and development for the Monastery of Saint Catherine and the neighboring city of southern Sinai, with the ambition of making it an ever greater tourist destination. Naturally now it will be easier to divert tourism from the now former Hagia Sophia, where the beauty of its Christian art has been hidden behind Islamic hatred of images. The Egyptian government is very interested in relaunching religious tourism, since it knows how lucrative this industry is in that part of the world, and if it can also be an occasion to challenge Turkey, all the better.

Egypt responded vigorously to European chatter about Turkish neo-Ottomanism, and the Egyptian press and television have openly denounced it. But also the Egyptian Dar al-Ifta did not fail to comment on Erdoğan’s decision, calling it “a dangerous political game.” The effort to show the world respect for its cultural patrimony, Christianity, and art by the Egyptian leaders will not pass unnoticed, also because the project of development of the city and monastery of Saint Catherine stems from the awareness of the signficance of that area.

The position of Turkey is seen as uncivil, and the religious and touristic panorama is only a framework. Ankara is sowing nervousness and hostility in Libya, Iraq, and Greece, and now Egypt has decided what side it is on. In Iraq, where Turkey was accused of violating Iraqi sovereignty and disrespecting the principles of good neighborly relations due to military incursions, Cairo has offered diplomatic and political support to Baghdad. Further, it condemned the Turkish military intervention as unacceptable and capable only of threatening peace and regional security. Egypt is also looking for an “economic rapprochement” with Iraq, at a moment in which Baghdad threatens to exercise economic pressures against Ankara in response to the military intervention in northern Iraq. But above all Cairo is intensifying its cooperation with Iraq in matters of security and the fight against terrorism. In 2016 the Iraqi Defense Ministry announced that it would train thousands of Iraqi soldiers in Egypt.

Today, however, the positions taken by Egypt particularly irritate Turkish greed in Iraq and cement its ties with Barham Salih, who like Al-Sisi point to Arab alignment as the way to resist Iranian and Turkish influence. For this reason, Iraq is drawing closer to Egypt: they share fundamental interests together in keeping Turkish greed at bay. And it should not be forgotten that Saddam Hussein in his day welcomed thousands of Egyptian workers. Egyptians are already well-accepted among the Iraqi people, and public support for Iraqi-Egyptian relations both politically and economically already exists.

Today’s Italy is completely unprepared for, or perhaps it is better to say unaware of, Egyptian policy of a strong diplomatic and commercial presence in the Arab region. And the Turkish response is ever more aggressive as a result. Erdoğan cannot fail to target Iraq. Multiplying its military presence north of Baghdad and expanding its military influence  in the Arab region and targeting Kurds and residents of northern Iraq and Syria – which according to the aspiring sultan are all a threat – are among the absolute priorites for Ankara. But Egypt wants to be an obstacle to this and does not intend to step back from its effort to capitalize on anti-Ottoman sentiment in the Arab League – also because Cairo needs to address bureaucracy, instability, and the large presence of armed groups.

Following a script that has already been written, just at the moment in which the tension between Greece and Turkey seems to have eased due to the willingness of Istanbul to temporarily step back, Athens has succeeded in reaching an agreement with Cairo on the delimitation of the EEZ. But on the Egyptian side there are several different cautions in following the Greek aims, and the primary purpose remains addressing Turkish hostility.

Since 2014, Cairo has mainly been open to Vladimir Putin’s Russia. This drawing near to Moscow was important, also because just in these years Russia was returning to its role as a protagonist in the Middle East. Al-Sisi then placed Egypt clearly alongside the pro-Saudi Sunni coalition, above all because of their common enemry the Muslim Brotherhood. And Saudi petrodollars have begun to finance different projects considered essential by Cairo in order to restart the Egyptian economy. Relations with Trump’s United States also remain good.

Today Egypt has acquired the Russian super-defense system, nicknamed “Bastion,” to protect its coasts and gas fields in the Mediterranean, and it is reinforcing its naval capacities in light of the challenges it faces in the Mediterranean. Above all after the Turkish daily Yeni Safak, which is close to the party of Erdoğan, reported in mid-June that Turkey intends to institute a base in the Libyan city of Misurata, which faces the Mediterranean. Egypt wants to enter the European hydro-carbon market, and that is why Al Sisi is supporting the EastMed project, with which it wants to send Egyptian, Israeli and Cypriot gas to the Old Continent.

The Mediterranean chessboard sees pawns and knights in constant movement, ready to change everything, and this does not seem quite clear to all European leaders, above all in Italy.