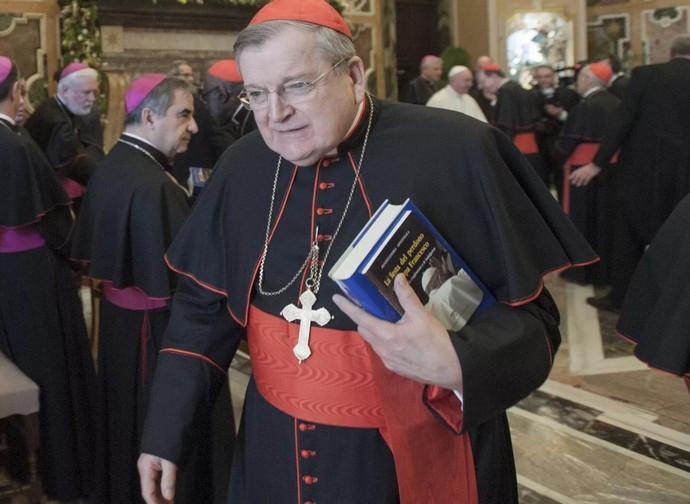 The best term to describe the current state of the Church is confusion, confusion often bordering on error. The confusion is not limited to one or another doctrine or discipline or aspect o the Church’s life but it seems to be a confusion regarding the very identity of the Church.

Confusion has its source in a failure of respect for the truth, either in the denial of the truth or in the pretense of not knowing the truth or in the failure to declare the truth which one knows. In his confrontation with the scribes and the Pharisees on the occasion of the Feast of Tabernacles, Our Lord spoke plainly about those who promote confusion, refusing to recognize the truth and to speak the truth. Confusion is the work of the Evil One, as Our Lord Himself taught, when he spoke these words to the scribes and Pharisees:

“Why do you not understand what I say? It is because you cannot bear to hear my word. You are of your father the devil, and your will is do your father’s desires. He was a murderer from the beginning, and has nothing to do with the truth, because there is no truth in him. When he lies, he speaks according to his own nature, for he is liar and the father of lies. But, because I tell you the truth, you do not believe me. Which of you convicts me of sin? It I tell the truth, why do you not believe me? He who is of God hears the words of God; the reason why you do not hear them is that you are not of God.” (John 8, 43-45)

The culture of lies and the confusion they generate has nothing whatsoever to do with Christ and with His Bride, the Church. Remember Our Lord’s admonition in the Sermon on the Mount: “Let what you say be simply ‘Yes” or ‘No’; anything more than this comes from evil.” (Mt 5,37)

Why is it important for us to reflect upon the present state of the Church, marked as it is by so much confusion? Each of us, as living members of the Mystical Body of Christ, is called to fight the good fight against evil and the Evil One, and to stay the course of the good, the course of God, with Christ. Each of us, according to our vocation in life and our particular gifts, has the obligation to dispel confusion and to manifest the light which come from Christ alone Who is alive for us in the living Tradition of the Church.

It should not surprise that, in the present state of the Church, those who hold to the truth, who are faithful to the Tradition, are labelled as rigid and as traditionalists because they oppose the prevailing agenda of confusion. They are depicted by the authors of the culture of lies and confusion as poor and deficient, sick persons in need of a cure.

In the end, we want only one thing, that is, to be able to declare, as Saint Paul declared at the end of his earthly days:

“For I am already on the point of being sacrificed; the time of my departure has come. I have fought the good fight, I have finished the race, I have kept the faith. Henceforth there is laid up for me the crown of righteousness, which the Lord, the righteous judge, will award to me on that Day, and not only to me but also to all who have loved his appearing.”. (2 Tim 4, 6-8)

It is for the love of Our Lord and of His living presence with us in the Church that we fight for the truth and for the light which it always brings into our lives.

Apart from the duty to combat lies and confusion in our daily lives, as living members of the Body of Christ, we have the duty to make our concerns for the Church known to our pastors – the Roman Pontiff, the Bishops and the priests who are the principal co-workers of the Bishops in shepherding God’s flock. Canon 212, one of the first canons in Title I, “The Obligations and Rights of All the Christian Faithful,” of Book II, “The People of God,” of the Code of Canon Law reads: “
§1. Conscious of their own responsibility, the Christian faithful are bound to follow with Christian obedience those things which the sacred pastors, inasmuch as they represent Christ, declare as teachers of the faith or establish as rulers of the Church.
§2. The Christian faithful are free to make known to the pastors of the Church their needs, especially spiritual ones, and their desires.
§3. According to the knowledge, competence, and prestige which they possess, they have the right and even at times the duty to manifest to the sacred pastors their opinion on matters which pertain to the good of the Church and to make their opinion known to the rest of the Christian faithful, without prejudice to the integrity of faith and morals, with reverence toward their pastors, and attentive to common advantage and the dignity of persons.”

The sources of can. 212, which is new to the Code of Canon Law, are the teachings of the Second Vatican Ecumenical Council, especially no. 37 of the Dogmatic Constitution on the Church, Lumen Gentium, and no. 6 of the Decree on the Apostolate of Lay People, Apostolicam Actuositatem. The effective communication between those who exercise the pastoral office and the lay faithful who carry out the apostolate of the sanctification of the world in all of its dimensions aims both at the spiritual care of the lay faithful, in order that they be able to meet the challenges of the apostolate and at the good of the Church herself, in which the lay faithful are rightly called to make their contribution.

As the canonical legislation underlines, in fidelity to the Church’s teaching in the just-mentioned documents, the lay faithful are called to make known their concerns for the good of the Church, even making these concerns public, while always respecting the pastoral office as it has been constituted by Christ in the founding of the Church through His public ministry, most of all, through His Passion, Death, Resurrection, Ascension and Sending of the Holy Spirit at Pentecost. In fact, the interventions of the lay faithful with their pastors for the building of the Church not only does not diminish the respect for the pastoral office but, in fact, confirms it (cfr. Lumen Gentium, 37).

Sadly, today, among some in the Church, the legitimate expression of concerns about the mission of the Church in the world, on the part of the lay faithful, is judged to lack respect for the pastoral office.

The already formidable challenge presented by an ever increasing and more aggressive secularization is made yet more formidable by several decades of a lack of sound catechesis in the Church. Above all, in our time, the lay faithful look to their pastors to set forth clearly Christian principles and their foundation in the tradition of the faith as it has been handed down in the Church in an unbroken line.

An alarming manifestation of the present culture of lies and confusion in the Church, is the confusion about the very nature of the Church and its relationship to the world. Today, we hear more and more that all men are children of God and that Catholics should relate to persons of other religions and of no religion as children of God. This is a fundamental lie and font of the most serious confusion.

All men are created in the image and likeness of God, but, since the Fall of our First Parents, with the consequent inheritance of original sin, men can only become children of God in Jesus Christ, God the Son, Whom God the Father sent into the world, in order that men could again become His sons and daughters through faith and Baptism. It is only through the Sacrament of Baptism that we become children of God, adopted sons and daughters of God in His only-begotten Son. In our relationships with persons of other religions and of no religion, we must show them the respect owed to those created in the image and likeness of God but, at the same time, we must give witness to the truth of original sin and of justification through Baptism. Otherwise, the mission of Christ, His Redemptive Incarnation, and the continuation of His mission in the Church makes no sense.

It is not true that God wills a plurality of religions. He has sent His only-begotten Son into the world to save the world. Jesus Christ, God the Son Incarnate, is the only Savior of the world. In our interactions with others, we must always give witness to truth about Christ and the Church, in order that those who follow a false religion or have no religion may receive the gift of faith and seek the Sacrament of Baptism.