Dominic Savio and the secret of saintliness

Coming from a large family, humble and rich in faith, the very young Dominic Savio once asked Don Bosco what the secret of saintliness was. To pray and do good, with joy, was the reply. And Dominic did just that, proving to be a "a small, or rather great, giant of the spirit", as Pius XI called him. 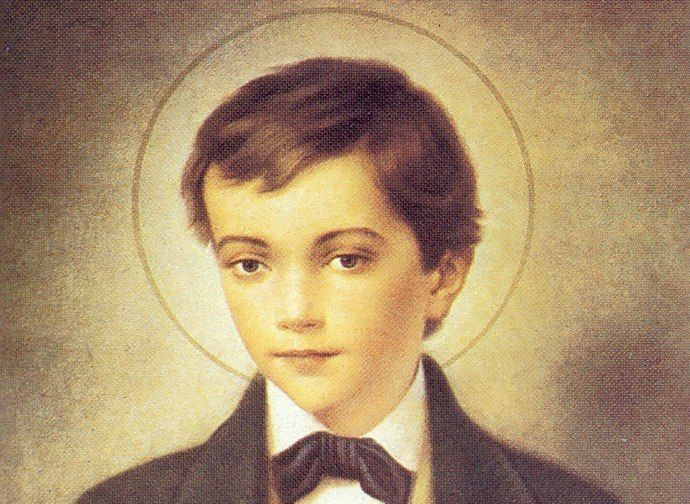 Carlo Enrico is sitting on the back seat of a large car. His father is at the wheel, his mother in the passenger seat. The silence in the car is overwhelming. If only he had headphones... but they have been confiscated, along with his iPhone. He begins to worry, wondering how long he will be punished like this, not allowed to go out with friends, deprived of iPhone and headphones, his video games also confiscated. Of course, the moment when the guard at the big bookshop in the city centre caught him trying to leave without paying for the chargers he had stolen from the iPhone department was terrible. The guard would brook no excuse, thundering against “the rude and spoiled children of the rich”, and called the police. The hour spent at the police station seemed endless. Then his parents arrived, spoke to the chief and took him home.

His father's questioning hadn't got much out of him; he hadn't been able to tell them why he had taken those chargers (which, to tell the truth, he didn't even need). He could have bought them - his parents gave him a fair amount of pocket money every month, and his mother always told him that it was a lot of money for a twelve-year-old - but taking them and trying to leave without paying for them had seemed like a grown-up thing to do. His parents didn't think so. They had announced the follow-up, in addition to the punishments described above. After a phone call they had made to their friend Don Celestino, their parish priest, they had told him “Tomorrow we’re going on a pilgrimage” An unfamiliar word. It sounded like “We’re going to build a bridge”.

Now they are travelling on this "pilgrimage", to learn about the life of a young man about his own age, whom his parents want to be an example for him. His name is Dominic Savio. Carlo Enrico feels a pang of jealousy: who could this Dominic be, whom his parents admire so much, while they have confiscated all his gadgets from him? Who knows what kind of airs he will put on when they get there? Carlo Enrico reads on the sign at the entrance to the village: "San Giovanni di Riva". They arrive at their destination and stop in front of a building designated as "La Casetta". They get out of the car and are greeted by a young man who is to be their guide; his name is Alessandro. They begin their visit. Alessandro explains to them that this is the Saint Dominic Savio Spirituality Centre known as "La Casetta", which is located near the house where the young saint was born, in San Giovanni di Riva. The house that Carlo Savio, Dominic's father, had rented is situated to the north-west, on the corner at the end of the whole complex. The Savios lived there until November 1843, when Dominic was not yet two years old; then they moved, for work reasons, to Morialdo, a hamlet of Castelnuovo, where they remained for about ten years.

On hearing that date mentioned, Carlo Enrico asks if Dominic had died. Alessandro smiles and confirms, yes, he died in 1857. The boy feels a little uneasy: he cannot be jealous of someone who is dead. He begins to pay attention to the explanations of Alessandro, who is now intent on showing them the little chapel carved out of the old kitchen; then they visit a small museum reproducing the workshop of a blacksmith, which was the trade of Dominic's father, the room where Dominic was born, with the original brick floors, and the children’s small bedroom. Carlo Enrico feels sad to see such a small room, which had to accommodate not only Dominic but also his brothers. He thinks of his own room, spacious and bright.

Alessandro explains that Dominic Savio came from a relatively poor family. His father, Carlo Savio, was, as previously mentioned, a blacksmith and his mother a seamstress; they had nine other children. His parents soon taught Dominic to pray, to love God. The boy went to Mass almost every day and became an altar boy. At the age of seven, he was offered his First Holy Communion, which was unusual for the time when the normal age for receiving the Eucharist for the first time was 12. Carlo Enrico is touched by the story.

As Dominic was an intelligent child, his parents tried to give him a complete education. But the village where the family lived did not have a school. Every day Dominic walked the four kilometres to and from Morialdo to Castelnuovo d'Asti, where there was a school. Many were surprised to see the young boy make this long journey, but he replied that he was not alone, but accompanied by God.

At school, he quickly became known for his great qualities. He was quite popular with his classmates, but said that his best friends would always be Jesus and Mary. Don Bosco (1815-1888) visited the region in 1854 and heard about this pious and intelligent boy. After meeting and questioning him, he decided to take him to his school, the Oratory of St Francis de Sales, in Turin, in the Valdocco district, which was then home to some 115 children.

Dominic told Don Bosco of his dream: to become a saint. Carlo Enrico is astonished: he has never heard of such an aspiration: wanting to become a saint. A policeman, a fireman, a Formula One racer, perhaps: but a saint? Dominic definitely intrigues him. Alessandro continues the story, explaining that Don Bosco had told Dominic the secret of saintliness: to pray and do good, to try to be an example for others, doing everything with joy and a smile. Dominic applied himself to this, and the numerous episodes of his life testify to it. What follows is an example. One day, after a serious argument, two students decided to fight to the death. Dominic went to see them, stood between them and brandished a cross, telling them to strike him first. A few days later, he succeeded in reconciling them. He founded a group of young people, the Company of the Immaculate, with the aim of edifying and sanctifying its members. Prophetic visions are attributed to him: he saw the official re-establishment of the Catholic religion in England.

But, sadly, Dominic was of frail health. He fell ill in June 1856. Don Bosco, concerned, sent him to the familiar surroundings of Mondonio (where the Savio family had moved in 1853) so that he could rest. He stayed there for two months and returned to Turin at the end of August. But he fell ill again. Don Bosco sent him to the infirmary; then, hoping that the country air would restore his health, he asked Carlo Savio to come and pick up his son. Dominic returned to Mondonio on 1 March 1857. He died of tuberculosis on 9 March, at about 10 o'clock in the evening. Shortly before he died, he said to his parents with an air of ecstasy: "Oh! What I can see is so beautiful!". 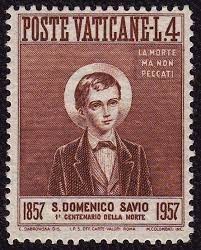 When Dominic Savio died, Don Bosco was so convinced of his saintliness that he decided to publish his biography immediately. Thus, he wrote a book on Dominic in 1858, to highlight his exemplary life. In fact, this boy who died at just under 15 years of age had all the credentials to be held up as a model for young people. In 1914 his mortal remains were transferred to the Basilica of Mary Help of Christians in Turin. Pius XI described him as a "small, indeed great, giant of the spirit". Declared a hero of the Christian virtues on 9 July 1933, Pius XII beatified him on 5 March 1950 and canonised him on 12 June 1954. Dominic, not quite fifteen years old, thus he became the youngest Catholic saint who was not a martyr (later 'overtaken' by other even younger saints, such as Francisco and Jacinta Marto). His mortal remains, placed in a new reliquary made for the 50th anniversary of his canonisation, are venerated in Turin's Basilica of Mary Help of Christians.

He is the patron saint of pueri cantores, as well as of altar boys, both liturgical tasks that he actively carried out. Equally well known is his special protection for pregnant women, through the sign of his scapular, in memory of the miracle with which the saint saved the life of one of his little sisters who was about to be born. The saint's liturgical memorial was set for 9 March, while for the Salesian Family and the Piedmontese dioceses it was set for 6 May, to avoid the celebration falling in Lent.

The visit is over, and after giving thanks, Carlo Enrico and his family set off on their return journey. The boy remained silent throughout the journey. When they arrive home, he goes to his room and puts the little image of the saint on his bedside table. He sits on the bed and thinks about what he has learned today. He makes a mental promise to Dominic never to steal again and to become an example to others. His father watches him through the door, which has remained ajar, and understands that his son has learnt an important lesson today. He inwardly thanks Saint Dominic Savio for this additional miracle.