«Dear Bishop, help me to save my son»

"Your Excellency, My name is Thomas Evans and I am Alfie’s father. I felt great sadness reading the press release issued by the Archdiocese, concerning my son’s situation". That's the beginning of the letter that Tom sent to the Archbishop of Liverpool. 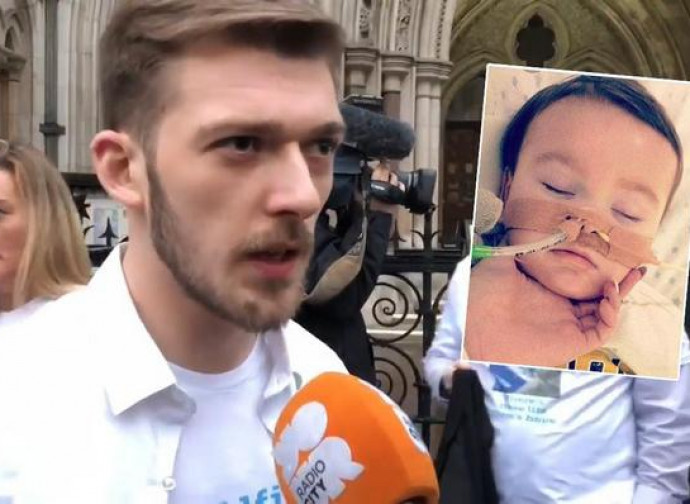 My name is Thomas Evans and I am Alfie’s father. I felt great sadness reading the press release issued by the Archdiocese, concerning my son’s situation. My greatest sorrow results from not having been recognized as a child of Holy Mother Church: I am Catholic, I was baptised and confirmed and I’m looking to you as my shepherd and to the Holy Father as the vicar of Jesus Christ on earth.

That’s why I knocked on the Church’s door asking for help in order to save my son from being euthanised! Alfie is baptised like me and like you, Your Excellency. I would like that prayers for him and for us be addressed to the only real God. I am aware that my son’s death is a real possibility and maybe is not a long way off. I know that heaven is waiting for him as I cannot imagine which kind of sin that innocent soul, nailed to his bed as to a cross, may have committed.

But I’m also aware that his life is precious before God’s eyes and that Alfie himself has a mission to accomplish. Perhaps his mission is to show the entire world the cruelty behind the judge’s words. For this judge stated that Alfie’s life is “futile”, thus supporting the same opinion of the hospital which wants him to die by suffocation.

I am not a doctor, but I can see that my son is alive and I see that he’s not being treated. I’ve been asking the hospital for months and I’m still asking them to let us transfer our child, mine and Kate’s child, God’s child, to the Pope’s hospital which promised to take care of him, as long as Our Lord will allow it and until Alfie will have completed his journey.

Why do they not let us remove our child from that hospital?
Have you asked yourself this question, Your Excellency?

We don’t want to force ourselves upon him and we don’t want therapeutic obstinacy but we would at least like his disease to be diagnosed and we would like him to receive the best possible treatment.

And we do not believe Alder Hey is able to grant this: they showed us and the entire world they are not able to and they just don’t want to do it. They declare they want to replace medical treatment with palliative care. But actually they have been handing out palliative care for months and now it’s that same palliative care they want to withdraw, together with the mechanical ventilation, in order to sedate him and let him die by suffocation.

It seems to me that this is neither right nor Christian. In my opinion this is euthanasia and we do not want our child to be left to die in such a way. Moreover, this might set a further precedent like in Charlie Gard’s case in order to prevent parents from taking care of their sick children, considered a burden by the State because they are ill and “therefore” useless, unproductive and expensive.

So please, Your Excellency, do accept my request for help and bring my voice to the Holy Father, so that everything possible is done to help me and Alfie’s mum Kate to take our child out of Great Britain to be cured until the natural end of his earthly existence. I invoke Your blessing and I pay mine and Kate’s respects.