Covid-19 has brought more migrants to the Mediterranean

The figures decreased in April, surely due to bad weather and the pandemic. However, in May numbers of illegal immigrants entering the EU from various Mediterranean routes tripled compared to the previous month. From January to May, 5,500 cases have been recorded, virtually triple the number for the same period in 2019. Frontex has reported this, but individual countries are not responding 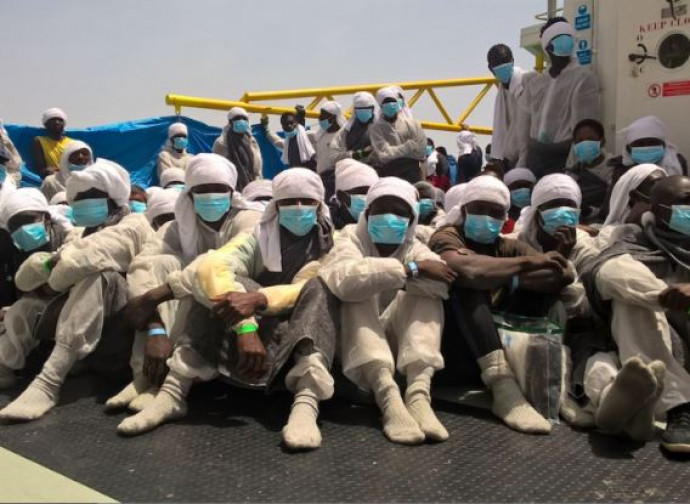 While figures were way down for April, perhaps due to inclement weather conditions and the coronavirus pandemic, last May illegal immigrants making their way into the European Union along various Mediterranean routes tripled compared to the previous month. A total of 4,300 cases were recorded. This is confirmed by data released by Frontex, the EU border agency.

Along the central Mediterranean route, which affects Italy and Malta, migration flows through Libya, Tunisia and Algeria. Around 1,000 illegal crossings were registered in May. This was a 40 % increase compared to April. From January through May, Frontex recorded a total of 5,500 cases, almost triple the number for the same exact period in 2019. According to Italy’s Ministry of the Interior, from the beginning of 2020 to June 14,  a total of 5,639 illegal immigrants landed on Italian shores compared to 2,144 for the first half of 2019.

Frontex and Italy’s Interior Ministry have identified the main nationalities of migrants as Bangladeshi, Tunisian, Sudanese and Ivorian. Along the eastern Mediterranean route, which flows from Turkey to Greece, 1,250 migrants, mostly Afghans, reached Greek islands. This was eight times more with respect to April. From January to May, 12,700 cases were registered despite the fact that in many cases Greek patrol boats forced rubber dinghies filled with migrants back into Turkish waters. Along the western Mediterranean route from Morocco to Spain, 650 illegal migrants were identified last May, nearly quadruple the figure recorded in April for a total of 3,700 migrants (about 50% of Algerian nationality) since January.

On the western Balkan land route (via Turkey) 900 illegal migrants were identified in May for a total of 6,900 in 2020. This is a 50% increase compared to the same period in 2019. From Frontex’s recent data, it is clear that all routes used for illegal immigration within the Mediterranean basin have recorded an increase in figures with respect to April. This is so, even if, on an annual basis, the 31,600 illegal immigrants who have already arrived in Europe since the beginning of 2020 via Mediterranean routes is actually 6% less than in the first 5 months of 2019.

Frontex’s French director, Fabrice Leggeri, warned of a further rise in tension on the border between Greece and Turkey. "If Turkey were to create a situation similar to that of last March, Frontex would significantly increase its staff in Greece," Leggeri said, recalling Ankara's decision to send thousands of violent illegal immigrants toward Greek and EU land borders.

In a crisis situation Frontex could deploy up to 1,500 personnel along the Greek-Turkish border. Currently it has 600 on the EU land border with Turkey as well as in Aegean waters and islands. Commenting on the situation involving the Evros River, located on the Greek-Turkish border, Leggeri noted that "in recent months, Turkey’s border patrol has opened fire on Greece on at least five occasions, but no one has been injured."

The Frontex director then criticized the EU asylum legislation. Leggeri said applications for international protection should be "already verified at the (EU’s) external borders." Furthermore, "asylum seekers should be informed as soon as possible whether they will be granted refugee status or not." Finally, for Leggeri, "if the asylum decision is negative, migrants must be sent back immediately."

Leggeri’s assessments are not new, but they do clash with difficulties experienced by individual nations and those of the European Union in general to actually refuse illegal immigrants who are not recognized as having rights of entry.