It was no mistake an article was published and subsequently removed from the Vatican News English web site. This article considered the beneficial effects that coronavirus has had on the planet. It was written by a young Nigerian Jesuit who merely summarized what he had been hearing all these years within the Society of Jesus and the Vatican. 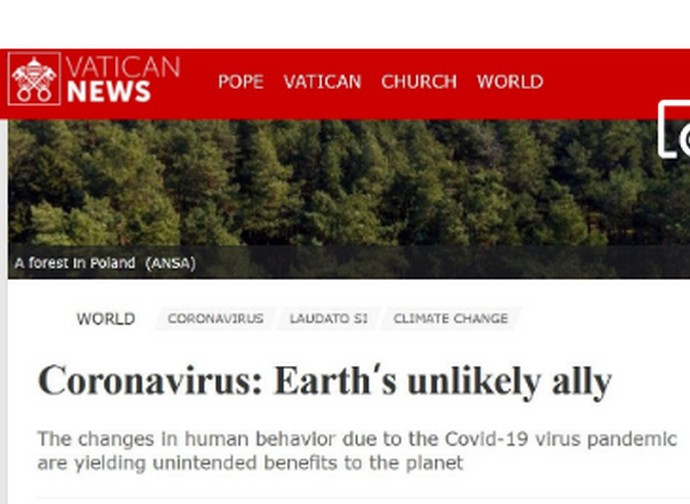 No, it wasn’t a journalistic gaffe as occurs when articles are hastily published by rushed, undisciplined and poorly skilled editors. Not in the least. The Jesuit priest, Fr. Benedict Mayaki, SJ, posted an article in the 30 March edition of Vatican News praising the coronavirus’s effects on earth. This was no mistake, but rather the logical consequence of the ecological aberrations promoted under the current pontificate.

The fact that the article was first posted then taken down the next day upon receiving numerous riveting complaints, doesn’t mean that what Fr, Mayaki wrote wasn’t perfectly consistent with the ecologism which is so fashionable within today’s Church in reference to the encyclical Laudato Si ' (Mayaki himself explains why), from the Pachamama prayer, the pantheism exalted toward the end of the Amazon Synod, and to the constant respect being paid to Mother Earth by so many prelates nowadays.

What does Fr. Mayaki say in his controversial article? In brief, he argues that while the world is quite rightly worried about the coronavirus, we must appreciate how a cease in human activity has brought great benefits to the planet, thereby giving it a chance to heal itself. To prove his thesis, he tells stories and quotes random news articles. He tells us that fish and swans are back in Venice, that air is now clean in Hong Kong, that the reduction of the concentration of nitrogen dioxide over the Chinese skies has caused (no one knows how) lower CO2 emissions. He writes that the blocking of transit (especially airplanes but also ships and cars) had led to significant improvements in the atmosphere. This is all to say that we must learn our lesson now and become devoted to sustainability.
What does this really mean? Reading between the lines, we are under the impression that the "stay all home" policy to reduce the spread of Covid-19 infection must continue well after the pandemic subsides. It is no coincidence that Fr. Mayaki ends up quoting the encyclical Laudato Si ' when denouncing the devastating effects of human activity has had on the planet: “Never have we so hurt and mistreated our common home as we have in the last two hundred years." (n. 53).

While the scandalous nature of the article is clearly evident at a time when so many countries are tallying huge numbers of deaths brought on by coronavirus, we must admit that its thesis is far from new within Vatican circles. Fr. Mayaki is not an expert on the subject matter, whose opinions have been occasionally and unfortunately published by Vatican News. Instead he is a young Nigerian priest, ordained not even two years ago and has been the editor for the English-language edition of Vatican News for just a month and a half.

In other words, Fr. Mayaki is the classic enthusiast who was simply writing what he learned upon entering the Jesuits which for last ten years has put ecology at the centre of its mission. Since 2010 the term “ecology” was added to the Jesuit’s Secretariat for Social Justice and a year later the order set up an international working group  which published ‘Healing A Broken World’ report, replete with environmentalism clichés, such as indigenism and obviously all aspects of climate change.

It is an approach that we find in the current pontificate, that inspired Laudato Si’  and pervasive throughout the content discussed at the Amazon Synod. Poor Fr. Mayaki. He was inescapably reared with this mind-set and naively brought it to bear on current affairs. He just chose the wrong time. Had he waited just a few months, once the health emergency was over, he would have been hailed as a great thinker.

Indeed, even more explicitly idiotic ideas have been written in recent weeks by Leonardo Boff, a former priest and liberation theologian who was, as it were, “struck by lightning” and converted to ecologism.  Boff was the man recruited by Francis to inspirer the pope’s writing of Laudato Sì'.  In Boff’s recent article posted on the A terra è redonda web site, he claims that the coronavirus is "Gaia’s retaliation for the offenses that we have continuously inflicted on her." Gaia, as we know, is the Greek goddess who personifies Earth and who was later revived by the scientist James Lovelock to support his theory of the earth as a living superorganism. And in a more recent article, Boff furthermore wrote: “The current pandemic of the coranavirus represents a unique opportunity to rethink the way we inhabit the Common House, the way we produce, consume and relate to nature.”

Even Austrian Cardinal Christoph Schönborn, who highly regarded by Pope Francis, shared a similar opinion during a 22 March television interview. This is no punishment from God, explained Schönborn, but the direct result of our ecological sins: “Is it really necessary to fly to London for the weekend to go shopping? Is it really necessary to spend the Christmas holidays in the Maldives” We might be wondering what this has to do this with COVID-19? But this is what Archbishop of Vienna further asked: “Does [God] perhaps want to remind us that he has entrusted creation to us, and not given it to us to devastate?”

So why should we be outraged by poor Fr. Mayaki's article? He has only rewritten, like a good schoolboy, what he was constantly taught and what is highly appreciated inside the Vatican since it is supported by figures such as Boff, Schönborn and many others.  Indeed it is true that Fr. Mayaki's article was not only published, but was also tweeted out by Vatican News despite being finally removed nearly a day later. This is why the words used by Sr. Bernadette Reis, English-language representative on Vatican Media's editorial committee (CEM), seemed so ridiculous when explaining why the article was taken down: “It does not reflect the editorial line on the subject as indeed the hundreds of articles and interviews of these days published in all the languages of our portal demonstrate.” Her apologies for “hurt(ing) the sensibilities” of readers are also somewhat hypocritical. If such apologies are sincere, the Vatican should begin to seriously reflect on the ecologism it has embraced as a new religion.