The Benedictine Monastery of Santa Caterina in Perugia is being shut down. In February they received an unexpected Apostolic Visit, which has now been followed by the transferal of 5 nuns. The motive?  “The visitor found all aspects of our monastery in order, with the exception of the fact that we have not been vaccinated,” stated the Mother Superior, Mother Caterina to the Daily Compass, as she confirmed the truth behind the indiscretions circulating in the ether. “I was informed of the impromptu visit by Bishop Bassetti, who was, however, unaware of the motivations behind such sudden interest. The decree underlines what is stated as my inappropriate behaviour: should I have obliged my Sisters to perform an act against their will, risking denunciation?” 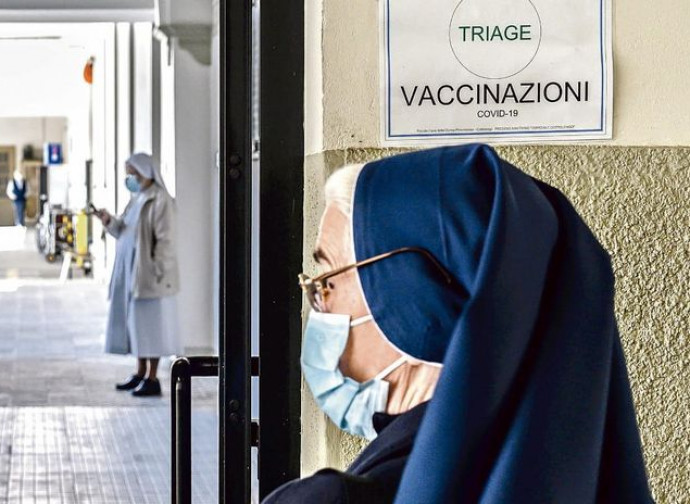 The Benedictine Convent of Santa Caterina in Perugia will soon be forcibly closed. What draws the public’s attention is the fact that, despite the convoluted clerical language – between the words stated and others left unsaid - it is the fact that the Sisters are unvaccinated which is the principal cause behind the closure.

After days of circulating indiscretions in the Umbrian city, together with articles on the sites of various news sources stating that the transferal of the 5 nuns is due to the fact that they have refused the ‘sacred’ inoculation, the Daily Compass has received confirmation that the exclusive explanation given to the Mother Superior of the Benedictine Monastery, present in Corso Giuseppe Garibaldi 179 since the year 1500, is this: their one sin is their obstinate will, expressed through their unanimous refusal of the vaccine, which the Mother Superior did not wish to force upon them. Otherwise, the decree recognises that the convent is in perfect order spiritually, economically and liturgically.

It was the selfsame Mother Superior who confirmed the news to the Daily Compass in this disturbing interview.
“It is true, I can confirm that this is the only explanation I was given at the end of the apostolic visit”, said Mother Caterina to the Daily Compass.

Why was an Apostolic Visit carried out?
Just after the middle of February we received the Apostolic visit. Immediately afterwards the review was sent, and we are now waiting for a response from the Congregation for Institutes of Consecrated Life.

But who requested the visit?
They didn’t tell me. I found out about it from Cardinal Bassetti, who is Archbishop of Perugia.

When did that happen?
I went to him in order to sign a document, but he told me I was not permitted to sign it, because the process involving an Apostolic Visit had been set in motion.

And how did you respond?
I was shocked. “What did we do?” I asked him.

What was his response to that?
He told me that he did not know, but that he had only been informed of the visit.

Who conducted the visit?
A Sister of the Order of the Poor Clares, from Orvieto, named Madre Cristiana.

What is in the decree which could possibly motivate the closure of the convent?
The decree states that my comportment was inadequate.

What does that mean exactly?
I did some soul-searching, but sincerely could not find a justification. Even the visitor said that she found nothing wrong, either with the liturgy or with our spiritual formation, and acknowledged that we are economically self-sufficient. Absolutely nothing, not even regarding the maintenance of the convent.

Did you come to a conclusion?
The only explanation that was given to me was the fact that the nuns had not been vaccinated.

Who told you that?
The visitor. (The Daily Compass has attempted to communicate with the Sister, but the cloistered convent has only one telephone line).

How many sisters are there in the convent?
There are five of us, with a sixth who was supposed to arrive from Brazil, but has had difficulty with obtaining her visa due to covid restrictions. At present, one of our sisters is in post-operative recovery in ALessandria. But anyway, there are five altogether at present.

Is it possible that as the number is so low that could be the reason for the decision to close the convent, as is stated in the Cor Orans (the application of the Apostolic Constitution Vultum Dei quaerere, regarding the feminine contemplative life)?
No, I don’t think so, because it would be more appropriate to request some form of affiliation before arriving at such a drastic decision.

Do you own property?
Only the monastery, purchased between 1860 and 1940 in three tranches, by the sweat of our brows. We have a bookbinding business which is still active.

According to the decree, what aspects of your comportment are considered inappropriate?
No such thing was explained to me, but perhaps, according to them, I should have obliged my Sisters to be vaccinated?

Have you been vaccinated?
No.

Does that make you a so-called “vaccine-hesitant”?
No, I am a woman of science. Before taking my vows I worked in the field of scientific research.

So, should you have obliged your Sisters to be vaccinated?
I could never oblige anyone to do something they do not desire to do. I would risk criminal investigation.

Do you agree with their decision to refuse the vaccine?
Yes. In May, when the question of the vaccine arose, they all immediately stated that they did not wish to be vaccinated. We decided to bide our time, and in October the problematic question presented itself once again. The convent’s doctor contacted me, and again we refused.

Have you had covid over the past two years?
No, we are all in excellent health.

As a cloistered monastery, you have very little contact with the public, is that correct?
Exactly, that is the case since the closure of the hostel. The only possible contact would be in the church, which we open to the congregation for Mass, but at those times we remain behind the grate in our cloistered area.

What is the situation at present?
Two nuns have been transferred, or rather, one is in hospital and will be discharged next week, while the other is in Rome at Villa della Meditazione to recover from an eye problem. However, I already know that they will not be returning here.

So, there are only two of you. What will you do?
We requested to go to the little Sisters of Divine Providence in Alessandria.

Do you think the convent will be closed?
I asked the members of the parish to pray, for the intention of maintaining this building as a place of prayer. I can go, but it is important that the convent remains.

Do you plan to get vaccinated now?
After what’s happened, I truly believe at this point, I will never choose to be vaccinated.