Communion in the hand: legitimised disobedience

Communion in the hand was not talked about either at the Council or in the liturgical reform movement. It is rooted in the post-conciliar period in the rebellious diocese of Northern Europe. Paul VI sought to curb it with his 1969 Instruction Memoriale Domini, which was intended to prohibit it and granted an indult only to the rebellious diocese in which there had not been success in curbing the abuse. On the first anniversary of his death, The Daily Compass remembers Bishop Juan Rodolfo Laise, the bishop who wrote the truth about communion in the hand and who opposed this practice, which is contrary to the universal law of the Church, in his diocese.
2. A PROTESTANT ATTACK ON THE PRIESTHOOD, by Nicola Bux 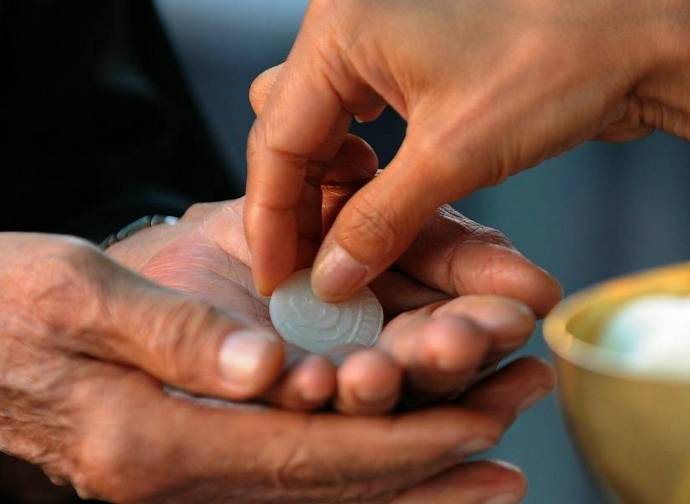 Until April 26, 1996, the Argentinian episcopate was one of the few in the world that continued to refuse the practice of distributing communion in the hand, which was introduced at the end of the 1960’s in open opposition to the will of Paul VI. On that day, the assembly of the Argentinian Bishops’ Conference obtained enough votes to ask Rome for the Indult that permitted the introduction of this practice, contrary to the universal law of the Church.

Rome immediately granted the indult, but “ad normam” [according to the law] of the “Instruction on the Manner of Distributing Holy Communion, Memoriale Domini,” in which it was clearly established that the ban on giving Communion on the hand was universally preserved, but that in any place (and only in those places) where the custom had already been introduced in an abusive way and had put down roots such that the bishops of the local episcopal conference considered that there was no other choice but to tolerate it, “The Holy Father [...] grants that, in the territory of the Bishops’ Conference, each bishop, according to prudence and his conscience, may authorise the new rite for distributing Communion in his diocese.”

The bishop of San Luis (Argentina) at that time, Juan Rodolfo Laise, judged according to prudence and his conscience that these circumstances did not exist in his diocese, thus he did not think it appropriate to avail himself of this indult. This decision was immediately interpreted by many as a rupture of the unity of the episcopate and even as a “rebellion” against a liturgical disposition from then on. The bishop of San Luis consulted with the various competent Roman dicasteries, who approved the unanimity of his decision.

This past July 22 marked the first anniversary of the passing of Bishop Rodolfo Laise, who upon retiring returned to the friary of his Capuchin Order, and since 2001 lived in the friary of San Giovanni Rotondo (where Saint Pio, to whom the Argentine bishop had a great devotion, lived and is now venerated). There Bishop Laise exercised his ministry, hearing the confessions of pilgrims every day for almost twenty years, until a few months before his death at 93 years old.

There are many aspects of his figure, as a religious, priest, and bishop which could be recalled, but we will focus on the book that he published to explain his position in the affair we have mentioned above, a book that, at his request I had the honour of presenting on the occasion of the launch of the Italian edition (Comunione sulla mano, Documenti e storia. Cantagalli, Siena, 2016) in a presentation that took place in the Aula Magna of the Patristic Institute Augustinianum of Rome. It was probably the first specific book ever published on the topic of Communion in the hand. In it, the Argentine prelate deepened the historical, canonical, and theological aspects of this way of receiving communion, and its influence on the devotion and spiritual life of the faithful.

The book is structured as a detailed commentary (paragraph by paragraph) of the documents which express the present legislation on the way of receiving Communion, to which was added an appendix with historical aspects that place us in the context in which those documents originated. All this permits us to understand the “mens legislatoris” – the intention of the legislator (Paul VI in this case) – which is a key element for interpreting the law.

Finally, after having responded to the principal arguments invoked to justify the practice of Communion in the hand, the study concludes with a reflection on the concrete application of the elements exposed in the pages of the book.

Below we will see the most important of these elements, which in many cases are forgotten truths that contrast with other received ideas.

One could be surprised, for example, to learn from reading this book that this form of receiving Communion was not discussed or even mentioned at the Second Vatican Council, nor was it part of the official liturgical reform that followed the Council. In effect, this practice, contrary to the norms, was introduced without authorisation in various regions once the Council concluded, in the middle of the 1960’s, and although Pope Paul VI immediately communicated (beginning in 1965) to those bishops that they needed to return immediately to the only legal manner of receiving, that is, on the tongue, this and other appeals from the Supreme Authority did not have any effect.

Since resistance to these directives proved tenacious, in 1968 the possibility was first considered of a specific indult for those places where they were not disposed to obey, although it was seen that this practice was “very questionable and dangerous” and it was known that if the way of dealing with the question was wrong, there was “the danger of weakening the faith of the people in the Eucharistic presence.”

It was thus that Paul VI who, according to his own words, could not “refrain from considering any innovation with obvious apprehension,” made a consultation “sub secreto” [meaning that the responses of individual bishops remained confidential] of the world episcopate on how to address the disobedience.
The result of the consultation was that a large majority of the bishops evaluated any kind of concession as dangerous.

As a result, the Pope ordered the Sacred Congregation for Divine Worship to prepare a draft of a pontifical document, with which to confirm “the thought of the Holy See about the inopportunity of the administration of Holy Communion on the hand to the faithful, indicating the reasons (doctrinal, liturgical, pastoral, etc.)”

Thus it was on May 29, 1969, the Congregation for Divine Worship published the Instruction Memoriale Domini, containing the legislation that is still in force and that may be synthesised in this manner: the prohibition of communion on the hand remains universally in effect, and bishops, priests, and the faithful are exhorted to submit themselves diligently to this law that is once again reiterated. However, where this illicitly introduced custom has taken root, the Instruction foresees the possibility of granting an indult for those regions that were not disposed to obey this papal exhortation to respect the universal law. In those cases, “to help the bishops’ conferences to fulfil their pastoral task, in today’s circumstances that are harsher than ever,” the Pope disposed that the respective conferences (with the condition of having obtained the approval of two-thirds of their members) would be able to ask for an indult from Rome so that each bishop of the conference, according to prudence and his conscience, would be able to permit the practice of Communion on the hand in his diocese.