The IPCC's Sixth Report, published yesterday, is sounding climate emergency alarms with its usual catastrophic predictions, unless political and economic measures are not immediately taken. However, current data refute claims on the continuous rise in global temperatures. Meanwhile it is useful to remember that in 1989 the UN launched an alarm in which governments were given just ten years to reverse the trend. Thirty years later, those catastrophes have never come true. 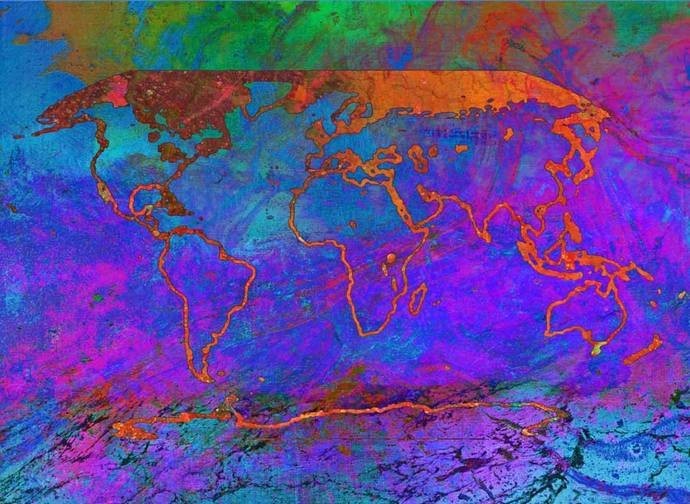 There’s nothing new to look forward to in the sixth report of the IPCC (Intergovernmental Panel on Climate Change), the UN body that deals with climate change. As widely predicted, the climate catastrophe is already underway, with rising seas, global temperatures out of control, extreme events raging, glaciers melting and so on. It is “alarming,” and if allowed to continue, it will be the end of the planet, with some damage being already irreversible. Hence, immediate action must be taken to salvage what can be saved. But what does that involve? Obviously, by quickly eliminating all fossil fuels, especially coal (but methane should also be included in the list of "not acceptables") while focusing on renewable sources of energy such as wind and solar power. In brief, it is "code red for mankind", as UN Secretary General Antonio Guterres has said, indicating a warning regarding a limit that cannot be exceeded: after code red there is only disaster.

The IPCC's report, released yesterday to the public, is the first of three parts. The last and fourth part will be published in 2022, which is intentional so as to put pressure on the next international climate conference (COP26) scheduled for this November in Glasgow, whose failure is already assured. "Science has spoken, now it's politics' turn", was the usual refrain repeated once again yesterday to reinforce the narrative according to which there is a scientific world with total consensus on the unprecedented climate emergency, and then, there is the world of government leaders who have no real willpower to take the necessary measures for the sake of petty electoral interests.

But that is a narrative, not reality. Meanwhile, what science has spoken? Here we must remember that the IPCC is not a scientific body, as is generally believed, but a political one, as its name suggests: it is an intergovernmental body under the aegis of the UN. There are scientists within it, but not only, and they are not even the majority: so much so that the current IPCC president, South Korean Hoesung Lee (in office since 2015) is an economist, and his predecessor Rajendra Pachauri (2002-2015) was an engineer. So, the science-policy opposition is a pure fabrication. Moreover, the IPCC does not produce its own scientific studies but simply synthesises existing climate studies, and obviously not all studies, since there are thousands of scientists who deny the existence of a climate emergency.

Since 1990 the IPCC has periodically produced assessment reports, just like the one presented yesterday (the previous one was released in 2013-2014). The aim is always political: creating a climate alarm (e.g. excess CO2 emissions) in order to push governments to take the desired decisions (e.g. the elimination of fossil fuels) and convince public opinion to accept taxes and limitations on freedoms which they would never accept without a state of emergency.

If this sounds a lot like the mechanism by which the Covid emergency (and all that ensued) was born, then you should know that it is no coincidence. There is a totalitarianism that is advancing by leaps and bounds, exploiting the very theme of supposed global emergencies (but we will come back to this subject) and instilling fear amid the population.

Returning to the Sixth Assessment Report presented yesterday, there is a small detail that is left out, namely that there is no linear or tumultuous growth in global temperatures, even if CO2 emissions have increased. Indeed, we are now exactly at the level we were at the time of the last IPCC Report (2014). See the following graph, taken from Britain's MetOffice's Hadcrut5 database: 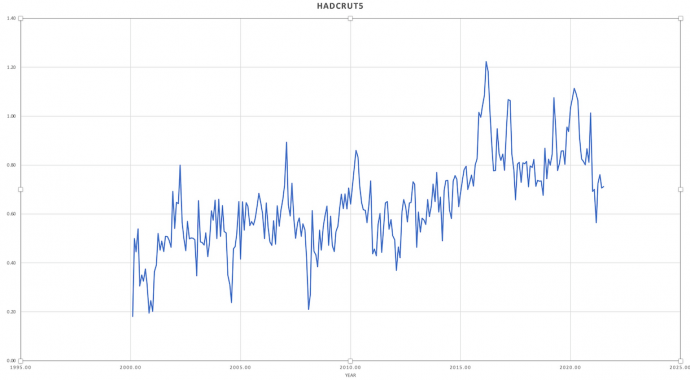 Practically speaking, an increase in temperature from 2002-2014 was followed by a multi-phase period characterised by El Niño (2015-2020) and now a decline in temperatures that brings us back to the levels of 2014. Indeed, 2021, the way it is going so far, is on schedule to be a year colder than 2014, and perhaps even 2005. Those who really study science should ask themselves about this data which contradicts the theories about man-made global warming. And not only this: given that we have become accustomed to a crescendo of climate alarms, going back to past appeals, we should now exercise a healthy dose of realism.

Recall that in 1989, just before the IPCC's First Report, the UN launched its Declaration on the Climate Emergency, also known as "Ten Years to Save the World." The UN Environment Programme (UNEP) director, Noel Brown, stated that "entire nations could be wiped off the face of the Earth by rising sea levels if the global warming trend is not reversed by the year 2000." Coastal flooding and destruction of crops would cause an exodus of "eco-refugees" resulting in political chaos. "Governments have a 10-year window of opportunity to solve the greenhouse effect before it goes beyond human control.," Brown said.

The UNEP report, in partnership with the US Environment Agency, spelled out the details: as warming causes polar ice caps to melt and ocean levels to rise by one metre, the Maldives and other islands would be flooded, as would a sixth of Bangladesh which would have to contend with 23 million displaced persons as a result; and Egypt would face famine as a fifth of its Nile Delta farmland would be submerged, resulting in massive losses of food sources for its people.

More than 20 years have passed since 2000 and these - like other catastrophic predictions - have not come true. Nor is there any reason to believe that the same predictions that were repeated yesterday for the umpteenth time will come true either. Instead, it is certain that the disaster will be caused by the very expensive climate policies that have already proved failures: huge investments already made in renewable resources and technologies to reduce CO2 emissions are destroying Western industries, moving much of the production to China, where there is no constraint on the use of fossil fuels. As a result, global CO2 emissions have continued and will continue to rise. And it won’t be yesterday's IPCC warning that’s going to change that.