Clement VII, when food is deadly

Descendant of the Medici family of Florence, he died after two days of excruciating suffering after eating a poisonous mushroom, Amanita phalloides. He was a political strategist and diplomat. Under his pontificate, several noteworthy historical events took place, from the Sack of Rome in 1527 to the Anglican Schism. As a great patron of the arts, it was he who commissioned Michelangelo to fresco the Sistine Chapel with the Last Judgement. 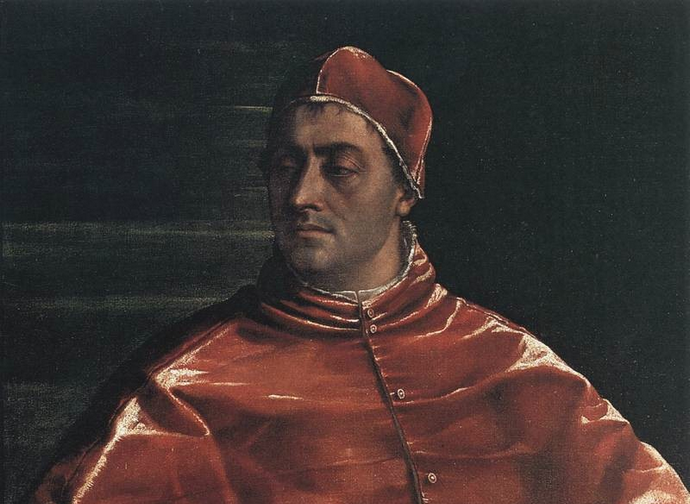 The papal dining room is stunningly simple, with a long dark wooden table covered only by a white tablecloth and candles flooding the room with soft light. The Pope is sitting alone at the table. He has in front of him a steaming plate of sautéed mushrooms. He closes his eyes and sniffs with delight at the scent emanating from it: it reminds him of his Tuscany. He eats with relish and mops up his plate with a piece of bread. He leans back and looks at the small plate of pecorino cheese on the table, which should conclude his meal. But, strangely, he does not feel like eating it. In fact, he feels a little nauseous. His head is spinning and he gets up, but the nausea overwhelms him....

It is 23 September 1534 and the Pope is Clement VII (1478-1534), a descendant of the great Medici family of Florence. He died in excruciating pain two days later, from the poisonous mushrooms he had eaten at that last meal. The 'culprit' was a very toxic mushroom, the Amanita phalloides. This is a deadly fungus [commonly known as the ‘death cap’], the harmful effects of which manifest themselves initially as severe gastroenteritis. Then there is a period of apparent remission, followed by the collapse of all internal organs, the liver in primis, and almost always death, within 48 hours at the most from ingestion.

This Pope ends miserably, with this terrible death, which does him wrong. "Sometimes great men have grotesque deaths and we feel betrayed. Who knows why we expect the death of famous people to be in tune with their grandeur", writes Balzac to his friend Jérôme de la Falaise, commenting on the death of a common acquaintance, famous but whose name he does not mention, who died in a tavern. Perhaps this reflection also applies to this pontiff, who had an extraordinary life.

He was born illegitimate and posthumously after the death of his father, who was none other than Giuliano de' Medici (1453-1478). The latter was killed in the Pazzi Conspiracy a month before his birth. His mother, Fioretta (actually Antonietta), was the daughter of a certain Antonio Gorini, a professor. Little is known about her: she died the same year her son was born - baptised with the name Giulio - and was immortalised by Sandro Botticelli in "Portrait of a Young Woman" (1475), a painting in the Pitti Palace.

We know that little Giulio was entrusted for the first ten years of his life, by his uncle Lorenzo the Magnificent, to the architect Antonio da Sangallo the Elder (1453-1534), who specialised in plans for fortifications. Finally Giulio was legitimised by the Medici and officially became part of their rich and powerful family. At the age of ten his uncle took him under his direct protection. A brilliant businessman, Lorenzo de' Medici managed to convince Ferdinand I of Aragon to grant him the priory of Capua of the Order of St John of Jerusalem for his young nephew: it was a prestigious and highly remunerative benefice. A few years later we find Giulio in Bologna, where he had taken refuge in 1495, and later in Rome, as a guest of his cousin Cardinal Giovanni de' Medici (1475-1521), who later became Pope Leo X.

In 1513, with the election of Leo X, Giulio was granted the concession of the archdiocese of Florence and, on 23 September of the same year, after a series of procedures and dispensations to overcome the obstacle of his illegitimate birth, he was created cardinal. After this appointment he began his unstoppable rise, characterised by a great wealth of ecclesiastical benefices and a very delicate role in papal politics. One of his actions was the attempt to form an alliance with England, to help Leo X oppose the hegemonic aims of France and Spain; for this reason he was appointed cardinal protector of England. The main features of the politics of this period was the search for a balance between the Christian princes and the convocation of the V Lateran Council (1512-1517), during which Giulio committed himself to the fight against heresies.

Both as archbishop and as governor, he proved to be a skilful man of government. Although he often received diplomatic assignments and missions on behalf of the Pope, he never neglected his archdiocese and with the collaboration of his vicar general Pietro Andrea Gammaro wanted to know, through individual inventories, the situation of all the churches under his jurisdiction. In 1517 he held a synod of all the diocesan clergy. In the meantime, as cardinal deacon, he was declared cardinal presbyter, with title to the church of San Clemente (26 June 1513) and then of San Lorenzo in Damasus. In 1522 he foiled a conspiracy plotted against him and was inflexible against his enemies.

On 9 March 1517 he was appointed vice-chancellor of the Holy Roman Church, a post that gave him the opportunity to put his diplomatic qualities to the test, showing a serious and unblemished demeanour in comparison with the alleged debauchery of his cousin. While trying to organise a crusade against the Turks, which Leo X considered absolutely necessary, he had to solve two problems: the Lutheran protest and the succession of the Empire, which, after Maximilian I, fell to his nephew Charles, already King of Naples. During 1521, the situation in Florence (of which he was city governor) made him move away from Rome quite often, but the sudden death of the Pope in the same year forced him to return to Rome to attend the conclave. Adrian VI was elected, whose candidature he had supported in order to gain the support of Charles V.

On 3 August 1523 Giulio’s diplomatic efforts were crowned with success, with the ratification of the alliance between the papacy and Charles V. Shortly afterwards, in September 1523, Adrian VI died, and Giulio, with the support of the Emperor, after a long and difficult conclave that lasted from 1 October to 19 November 1523, was elected to the throne of Peter, taking the name Clement VII. The election of the new pontiff was greeted with enthusiasm, even if certain expectations proved to be misplaced: Giulio de' Medici proved incapable of decisively resolving the problems he had to face. He tried to maintain a policy of neutrality in the dispute between Charles V and François I of Valois for dominance over Italy and Europe; Charles V was intent on restoring the Empire, modernising its administrative structures and pursuing an expansionist policy, which brought him on a collision course with the King of France.

And here begins a story involving the greats of the time who lived in that period. In fact they are greats of history. And Clement VII is the protagonist of several noteworthy historical episodes. For reasons of space we will mention only a few, without going into too much detail: readers will appreciate exploring them on their own. Thus, we see Clement VII involved in the League of Cognac (1526), created together with Francis I and Francesco Maria Sforza (as well as the cities of Florence and Venice) to throw off the Imperial hegemony. We find him acting during and after the Sack of Rome (1527) which lasted a month and at the end of which the Pope capitulated.

He was the protagonist of the Anglican Schism: he met Thomas More (the future St Thomas More, a great humanist and skilled jurist), sent to Rome by Henry VIII who wanted to obtain a divorce from his wife Catherine of Aragon. But Clement not only did not go along with him but also excommunicated him on 11 July 1533. The king responded with the Act of Supremacy, approved by Parliament on 3 November 1534, which declared him supreme king and sole head of the Church of England, attributing to himself the spiritual power that until that date had been the exclusive prerogative of the pontiff. Those who, like Thomas More himself, refused to accept the measure by oath and to recognise the king's new marriage, with the relative order of succession to the throne, were considered guilty of high treason and punished with death.

Clement VII, as a true Medici, was also a great patron of the arts: he developed the Vatican Library, continued the construction of St. Peter's Basilica, and completed work on the San Damaso Courtyard and the Villa Madama. He also commissioned Michelangelo to fresco the Sistine Chapel with the Last Judgement, following the work personally. He commented on and had all the works of Hippocrates published. In 1528 he approved the Capuchin Order and in 1530 he approved the Clerics Regular of St. Paul (known as the Barnabites).

He was a great political and diplomatic strategist, lived an extraordinary life, but met an absurd death: Balzac would consider it unsuitable. However, 25 September is here, and with it the anniversary of the death of this remarkable pope, felled by a fungus.