About twenty churches, mostly Catholic, have been subject to arson or vandalised in Canada soon after the discovery of mass children's graves. The causal link is the role played by boarding schools set up by the Canadian government in the 19th century to assimilate indigenous tribes. Yet Indian schoolchildren often died of disease and hunger in the absence of government aid. Today, Prime Minister Trudeau is attacking the Church in an attempt to make the state forget its own sins. 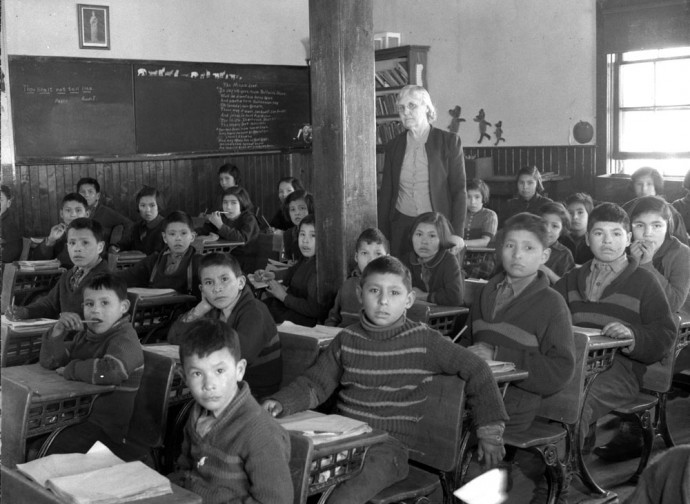 An epoch clash is underway between the Church and State in Canada. Between the discovery of mass graves and churches set on fire, as is often the case, the truth is found hidden in the folds of history.

By the end of May, 215 remains of Native American children had been found buried in a mass grave on the grounds of an old Catholic school in Kamloops, British Columbia. The building was one of several 19th century boarding schools set up for the education of Native Indian children. During his Angelus on 7 June, Pope Francis expressed his nearness in prayer to the Catholic community and to the entire Canadian people who had been "traumatised by the shocking news." The pope called for "light" to be shed on a fact that "further increases awareness of the pain and suffering of the past".

Then, to coincide with Canada's National Day of Indigenous Peoples, celebrated last 21 June, two churches were set ablaze In the span of one month. In the same period, roughly 20 fires and serious acts of vandalism against churches have been reported, most of them being Catholic. At least two of the incidents were reported by Canadian police as possible arson attacks. For now, there is no evidence of correlation between the two incidents, especially since southwestern Canada has been hit by unprecedented heat waves. However, it is also unlikely that the extreme temperatures might have led to fires starting in the houses of worship.

The second and most important discovery took place on 23 June, at the former Marieval Indian Bording School in Saskatchewan. There were not mass graves but 751 individual anonymous ones. The news that hundreds of unmarked graves being unearthed in the Cowessess First Nation is absolutely tragic, but not surprising," tweeted Perry Bellegarde, national president of the Assembly of First Nations.

First Nations representatives are waiting for a formal apology from the Catholic Church for its role in the boarding school system set up by the Canadian government. The "cultural genocide" was recognised in 2015 by the Truth and Reconciliation Commission which estimates that some 6,000 children died in these schools. Young students in Catholic and other Christian schools were kept in appalling sanitary conditions, mistreated, subjected to forced enculturation and sometimes physically abused, the accusers claim.

Canadian Prime Minister Justin Trudeau, from the moment he took office in 2015, immediately sped up investigations and called for a series of initiatives commemorating the victims. It was Trudeau who then asked for a formal apology from Pope Francis. The Canadian Prime Minister said he had spoken to the pontiff "personally", insisting "how important it is that he not only apologise, but that he do so to indigenous Canadians on Canadian soil." "I know that the leadership of the Catholic Church," Trudeau said, "is very actively exploring what steps can be taken."

In fact, many petitions for forgiveness have already come over the past 30 years. The first to apologise for the Catholic Church, in March of 1991, was the Canadian Bishops' Conference and the heads of religious orders who had helped run the state boarding schools. Then in July of the same year, there was a specific apology given by the Oblates of Mary Immaculate previously in charge of the aforementioned school in Kamloops until 1969. In 2009, Pope Benedict XVI also expressed " his sorrow at the anguish caused by the deplorable conduct of some members of the Church” in Canada." After the recent discoveries, the Archbishop of Vancouver, Michael Miller, said he, "sincerely and profoundly apologised to the survivors and their families, as well as to all those subsequently affected, for the distress caused by the deplorable conduct of those Catholics who perpetrated mistreatment of any kind in these residential schools." Miller then cast blame on the "colonialist policy" which in the past "had caused devastation for children, families and communities."

In the meantime, a concrete step towards reconciliation could be the meeting between Pope Francis and Canadian indigenous communities, scheduled for 17-20 December. The Canadian Bishops' Conference will participate in the meeting at the Vatican, along with representatives of First Nations, Métis and Inuit. Praising Francis' commitment to "listen" to the indigenous peoples and "respond" to their suffering, the prelates expressed their "sincere hope that these upcoming meetings will lead to a shared future of peace and harmony between the indigenous peoples and the Catholic Church in Canada."

But is it really only the Church that needs to seek forgiveness? The reality is actually more complicated than this. The mass graves and unmarked burial sites at schools were not just any old Catholic institutions but were at so-called "assimilation” schools. From 1863 onwards, these schools were  run by Catholics or members of other Christian denominations. They were dedicated to the enculturation of some 150,000 indigenous children. Many of the young borders were taken away from their families in the name of a colonialist project primarily set into action by the Canadian government. Sixteen dioceses participated in the project and at one point some 60-70% of the assimilation schools were Catholic.

The last boarding school was closed in 1998. Although there may have been accounts of direct acts of violence, supposedly many children died indirectly of starvation, cold, or disease due to the inefficiency of the Canadian government which failed to provide sufficient funds to the schools.

Meanwhile, last month, Trudeau reiterated that he had accepted the conclusion of an enquiry that Canada had committed cultural genocide against indigenous peoples. Despite promising reconciliation with indigenous peoples, Trudeau had spent nearly $100 million during his first years in office challenging First Nations in court. He then shifted the entire blame for cultural genocide onto the Catholic Church when, in fact, the incriminated schools were involved in an eminently governmental project funded by the Canadian state.

However, even in the Church there are those who refuse to be scapegoats. The president of the Canadian Bishops' Conference, Archbishop Richard Gagnon of Winnipeg, said bluntly in a recent homily: "There's persecution going on here." According to Gagnon, the Church's role in this affair has been tarnished by numerous "exaggerations" and "false conceptions." Predictably, these statements have stirred up a hornet's nest of controversy, especially among the native communities.

It is a very sad story in which only one subject is being held accountable: the Catholic Church. Meanwhile, there remains a deafening silence in terms of the Canadian government’s own responsibility.