Christmas forbidden, EU is heir to the French Revolution

The European Union has made an about turn, on the (grotesque) document banning the use of the word Christmas or overly Christian names. But it won’t be long before secularism strikes back, being the fundament of an EU that has denied its Christian roots and the project of its founding fathers. The truth is that today's EU, diversified and inclusive, is reminiscent of communist ideology. And, unfortunately, the anti-Christian anthropological transformation goes far beyond Europe. 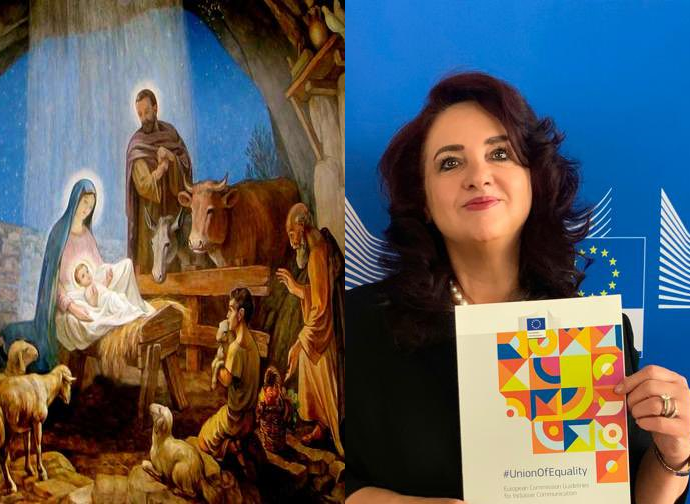 Last weekend we found out that the European Union is ashamed of its Christian roots, even to the point that it wants to forbid the use of the word Christmas or names that are overly associated with that peculiar religion called Christianity.

The tone used is clearly sarcastic, grotesque like the U-turn made by the Commissioner for Equality (Helena Dalli, in the photo above, right), a department whose name recalls the Jacobin Republic of Terror or the Soviet Union. It has withdrawn a document on the use of language because it lacks some EU "quality standards", as if that were the real issue and not the absurdity of the proposal.

But don’t be fooled. They will be back. Indeed, they are the ones already in charge. After all, the document was small fry, recommending to EU officials the use of specific language already in use in real situations, within Europe and also beyond. For some time, for example, one risked being expelled or sanctioned by some US or British universities for talking about Christmas in class, while in France, cribs which are permitted by the decision of single municipalities are often closed down by the authority of magistrates "for disturbing public peace".

And it's not just a matter for the EU. In the United Kingdom, last Monday, Celia Walden wrote in the Telegraph, "Christmas has already been deleted for years", in documents by various government, all conservative, "so as not to offend religious minorities". While an email, a few days ago, from an official of Parliament to all members quoted "a notice from the Cabinet Office", meaning from Boris Johnson, "that we should not use the word Christmas because the government intends to be inclusive and some religions do not celebrate it".

So not only the EU is against Christmas, but also the conservative Prime minister Boris Johnson. Nevertheless, it is more immediate to talk about the EU. From the moment the Union rejected and continues to reject its Judeo-Christian roots, it was obvious in which direction it would drift. If Christianity is not considered part of your tradition, it won’t occupy any particular role: it has the same status as Islam and all the other religions. Until the moment, in the near future, when the faithful of Muhammad will outnumber those of Christ.

Therefore, those who declare themselves ardently pro-Europeans, even federalists, and then complain about the Maltese lady's document seem naïve - such is the nationality of the Commissioner. The reality is that if you want the EU, this is the EU: as the French Revolution for Clemenceau was a "block", from which the good part could not be separated from the bad, in the same way, it’s not possible to have "European sovereignty" without the regime’s ideology of diversity and inclusiveness.

Our ardent "European sovereignists", therefore, should understand that the EU, even before being a political and economic project, is a cultural project, a continuation of the utopias of the continental Enlightenment rationalism of the eighteenth century, of the French Revolution, of the socialist utopias of the nineteenth century ( how much Saint-Simonism there is in every breath of the EU!) and of the social democracy of the twentieth century. According to some scholars, such as Legutko, the points of contact between the EU project and those of communism are equally evident. This is the EU, something very different from how De Gasperi, Adenauer, Schuman, but also De Gaulle, Thatcher and Craxi imagined it - but in contrast with Jean Monnet, he wanted it exactly like this, de-Christianized, secularized and secularized.

And yet, if it were only the EU, instead as we have also seen the English case. It is the effect rather than the cause of a cultural and even anthropological transformation, which is certainly not fought by multiplying the number of indignant tweets against Brussels.