After the invasion in 1974, "Turkey’s ethnic cleansing in northern Cyprus resulted in the displacement of some 200,000 Greek Cypriots". Women and children were raped, detained and killed. More than 500 churches and monasteries were looted or destroyed and toponyms changed to Turkish, for a "cultural genocide" aimed at erasing the Greek-Christian identity of Cyprus. The Daily Compass interviewed Uzay Bulut a Turkish journalist. 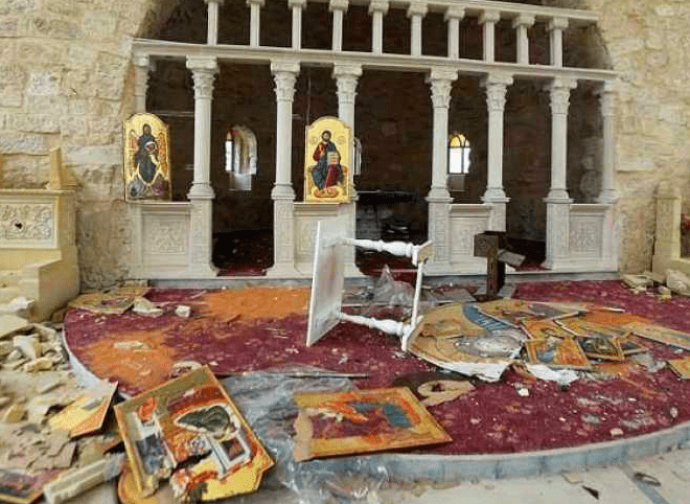 Ten days after the Pope's visit to Cyprus, the heartfelt appeal of Chrysostomos II, the highest Orthodox authority in Cyprus, is still resounding. He asked the Pope to offer "active support" for the restitution of the assets of 'his' Church that remain in the northern area of the island controlled by the Turkish Republic of Northern Cyprus, an entity, moreover, not recognised by the international community. The Orthodox archbishop spoke harshly about the Turks involved in the 1974 military intervention, who he stated, "not only imitated the bloodthirsty Attila, but surpassed him".

The Daily Compass spoke to Uzay Bulut, a Turkish journalist who has written numerous articles on the Cypriot situation including for The Washington Times and The Jerusalem Post,.

Is it true that Chrysostomos II told the Pope that Turkey "has confiscated 38% of our homeland using military force, expelled its inhabitants" and "desecrated and demolished the Lord’s shrines"?
That’s right. In the summer of 1974, Turkey staged two bloody military campaigns against Cyprus and invaded the northern part of the Republic of Cyprus. Turkey still illegally occupies the area today, which is not recognised under international law. Many well-documented atrocities were committed by the Turkish occupation forces during the invasion. Civilians, including children between six months and eleven years old, were murdered. Many were arbitrarily detained by the Turkish military authorities and placed in concentration camps. The detainees were tortured or exposed to other types of inhumane treatment, including forced labor. Greek Cypriot women and children between the ages of 12 and 71 were raped. The homes and shops of those who had to leave were looted, seized and confiscated. Since 1974, Turkey has forcibly occupied approximately 37% of the sovereign territory and 57% of the coast of the Republic of Cyprus. Turkey’s ethnic cleansing in northern Cyprus has resulted in the displacement of some 200,000 Greek Cypriots, about a third of the island’s population. In addition to the Greek Cypriots, Armenians, Maronites and other non-Muslim Cypriots were also forcibly displaced.
As a result, Turkey has effectively crushed the Christian population. And since then, Turkey and the regime occupying northern Cyprus have committed cultural genocide against Cyprus. According to a 2012 report, The Loss of a Civilization: Destruction of Cultural Heritage in Occupied Cyprus: “Churches have been subject to the most violent and systematic desecration and destruction. More than 500 churches and monasteries have been looted or destroyed: more than 15,000 icons of saints, countless sacred liturgical vessels, Gospels and other objects of great value have literally disappeared. Some churches suffered a different fate and have been transformed into mosques, museums, entertainment venues or even hotels, such as the church of Ayia Anastasia in Lapithos. [...] ".

Do you think the destruction of churches and religious symbols is the consequence of military occupation or that there other hidden motives?
Since the 1913-23 Christian genocide that targeted Armenians, Assyrians and Greeks, Turkey has methodically wrecked Christian cultural and religious symbols. The destruction and violation of churches in Turkey is obtained by a widespread and systematic policy. Numerous churches and other Christian properties across Turkey have been destroyed or seized. Furthermore, Turkey exported the same destructive policy to Cyprus, thus eradicating the Christian and Hellenic identity of the northern part of Cyprus. They are Islamising and converting the area to assume Turkish characteristics. This is Turkey's decades-long jihad against churches in Anatolia and Cyprus.

What is said about the events of 1974 in Turkey?
In 1974, the invading Turkish army killed, tortured and raped, but Turkey still calls the atrocities it committed "a peace operation". Turkey used two main pretexts to invade Cyprus. The first was the July 15, 1974 Greek army coup, which attempted to overthrow the democratically elected Cypriot president, Archbishop Makarios III. Five days later, on July 20, 1974, the Turkish Armed Forces launched a full-scale invasion on Cyprus, using the coup as a pretext even though Makarios had fled, and the UK, Cyprus's third guarantor power, refused to take joint action. A few days after the Turkish invasion, the Greek junta collapsed and the democratic government was re-established in Greece. The path was now clear for Makarios' return to Cyprus. Turkey, however, had other plans. Less than a month later, on August 14, Turkey launched a second and even more devastating invasion of the island. A second excuse was that Turkey "aimed to protect Turkish Cypriots" from Greek Cypriot violence. But the falsity of this excuse has been repeatedly exposed, notably by the Turkish general Sabri Yirmibeşoğlu. He said in 2010 that Turkey had burned a mosque in Cyprus in 1950 "in order to foster resistance" against the Greek Cypriots. So why did Turkey attack Cyprus? The main reason for the Turkish colonisation of the northern part of Cyprus was stated by former Turkish Deputy Prime Minister Tuğrul Türkeş in 2017: “Even if no Turks lived in Cyprus, Turkey would still have a problem with Cyprus and it is impossible for Turkey to let go". What Türkeş meant is that occupation allows Turkey to dominate the eastern Mediterranean.

In one of your articles, you wrote that "Turkey  has exercised ethnic cleansing in Northern Cyprus since 1974". Does that mean, in your opinion, it’s still happening?
Exactly, what Turkey has been doing in Northern Cyprus since 1974 is ethnic cleansing. Prior to the 1974 Turkish invasion, the population of all Cyprus was predominantly Christian-Greek for millennia. The Turkish-speaking Cypriot minority was scattered throughout the island and was never the majority in any of the main Cypriot cities. The situation changed when Turkey forcibly changed the demographic structure of the island. Turkey's 1974 atrocities drove Greek Cypriots out of the northern area, turning it into a Turkish colony and drew an end to the non-stop Greek presence recorded since prior to the birth of Christ. This is ethnic cleansing through forced displacement and land appropriation.