Today, on May 15, an original apostle of the Gospel is proclaimed a saint in St Peter's Square. He burned with the desire to make "his" Jesus known and loved, living among the Touareg people in the Algerian Sahara,: "I reside here, the only European... Happy to be alone with Jesus, only for Jesus". The long hours each day before the tabernacle: "The Eucharist, it is Jesus, it is all Jesus". 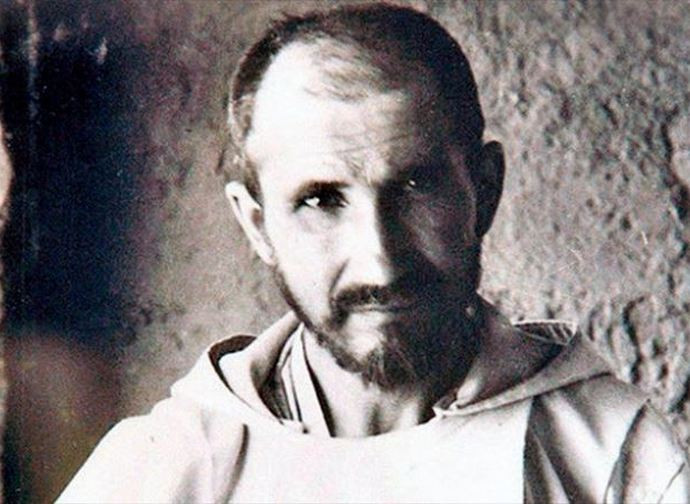 "My God, if You exist, let me know You". The first time I read Charles de Foucauld's biography, I was deeply struck by his cry of faith. It is also the key to understanding his entire existence. He abandoned everything and everyone when he met Jesus and set off on a physical and spiritual journey which took him to the depths of the Sahara desert among the Tuaregs where the sacrifice of his life was to be consummated. He was killed on 1 December 1916, in a clash between soldiers and rebels. In truth, dying for the faith had always been his most fervent aspiration.

"At the beginning of October 1886”, he wrote in his diary, “after six months spent with my family in Paris, while I was having the writings of my trip to Morocco printed, I found myself with some very intelligent, virtuous, and Christian people; at the same time, I felt a strong inner grace inside me that was pushing me: I started to go to church, without being a believer, it was the only place where I felt comfortable, and I spent long hours there, repeating a strange prayer: "My God, if You exist, let me know You!”

Born in France, in Strasbourg, on 15 September 1858, baptised two days after his birth, Charles de Foucauld was soon orphaned: his mother, father, and paternal grandmother died in 1864. It was his maternal grandfather who took him in with his sister Mary, both still very young.  He notes in his diary: “I have always admired the great intelligence of my grandfather, whose infinite tenderness surrounded my childhood and youth with an atmosphere of love, I always feel its warmth with emotion”. This, however, did not prevent him from going through the crisis of adolescence and youth, becoming, as he puts it, a “worldly young man without God”, turning away from the faith.

"For 12 years," he confesses to himself, "I neither denied anything nor believed in anything, despairing of the truth and no longer even believing in God, no evidence seemed clear enough to me. At the age of 17 there was only selfishness, vanity, wickedness, desire for evil within me, I was like a madman... I was in the dark of the night. I no longer saw God or men: I only saw myself”.  Although unconvinced, he enrolled in Military School, and for some years his only concern was the pursuit of pleasure in food and partying. Sent to Algeria in 1880, he felt attracted to the country and the Algerians but, romantically entangled with a woman, he was relieved of his military commission and returned to France; he left again shortly afterwards for Tunisia. However, in January 1882 he resigned from the army and the sequence of his adventures as a perpetual, restless traveller began. In Morocco, where he arrived with a preparation of no less than 15 months in the company of the Jew Mordecai, he had a truly unique experience of travelling 3000 km in an almost unknown country, concluding his search for all the topographical sites on 23 May 1884, when as a poor beggar he arrived at the border with Algeria, barefoot, thin and dirty. However, he wrote about this Maghreb journey: “It was hard, but very interesting, and I succeeded”.

Back in Paris with his family, he experienced the phase of his conversion thanks to an encounter with Abbot Huvelin, who immediately invited him to get on his knees and go to confession. It was thanks to this paternal imposition by his priest friend that Charles' soul opened up and his conversion was immediate and total.  We read in his writings: “I turned to Abbot Huvelin. I asked him for religious lessons: he ordered me to get down on my knees and go to confession, to go and receive Communion immediately... If there is joy in heaven for a sinner who converts, there certainly was when I entered the confessional!" He comments: "How good you are, Lord! How happy I am!" From then on, everything else would be a search, sometimes serene and often spasmodic, for God's will.
Everything changes in his existence, as he desires to become religious and live only for God: "I want to lead the life that I glimpsed, perceived while walking through the streets of Nazareth, where Our Lord, a poor craftsman lost in humility and obscurity, walked". After a period spent in two Trappist monasteries, in France and in the Middle East, following the austere life of strict Trappist observance, he lived as a hermit in the land of Jesus (1897 - 1900) to share the life of Nazareth, with the plan to do so together with other brothers for whom he had already drafted the 'Rule of Little Brothers'.

In August 1900, thanks to the intervention of Abbot Huvelin, he was ordained a priest to dedicate himself immediately to the 'lost sheep', to the most abandoned, most neglected souls, by putting into practice the commandment of love: ‘Love one another, as I have loved you, by this they will recognise that you are my disciples’. And he wrote on this subject: “Knowing from experience that no people is more abandoned than the Muslims of Morocco, of the Algerian Sahara, I asked and obtained permission to come to Béni Abbès, a small oasis in the Algerian Sahara on the border with Morocco”, where he stayed from 1901 to 1904. Every day, Charles spent long hours at the foot of the Tabernacle, convinced that "the Eucharist, it is Jesus, it is all Jesus" and that "when one loves, one would like to talk uninterruptedly with the beloved, or at least look at them without ceasing; prayer is nothing more than this: to entertain oneself familiarly with the Beloved; one looks at Him, one tells Him how much one loves Him, one enjoys remaining at His feet".

The Gospel had also transfigured him physically, and Brother Charles put himself at the service of the poorest; he left Akabli at the request of the local bishop and in January 1904 reached the Touareg tribe in southern Sahara, settling in Tamanrasset. "I reside here, the only European... Happy to be alone with Jesus, only for Jesus" with this apostolic programme: "My apostolate must be the apostolate of goodness. If someone asks me why I am sweet and good, I must answer: 'Because I am the servant of a Good that is better than I am'.

The First World War was already tearing Europe apart. It spread as far as the Sahara, where the French fort of Djanet was attacked by more than a thousand Senussites armed with cannon and machine guns, who, having by then cleared the way, easily reached the village where Charles de Foucauld lived. And there he died on 1 December 1916, violently murdered in circumstances that have always remained mysterious.

Thus ended the existence of this original apostle of the Gospel who burned with the desire to make 'his' Jesus known and loved, and to be the 'little universal brother', a brother to all, especially to the poorest, for whom he wished to consume everything, down to the last drop of his blood. Indeed, he dreamed of dying a martyr among the Touareg people who had welcomed him as one of their family. And in a way, his dream came true. Charles de Foucauld, whom Pope Francis proclaims a saint today in St Peter's Square, is the patron saint of Morocco, a land where he would have liked to end his days but was unable to do so. The Church in Morocco “draws inspiration from his spirituality by proclaiming the Gospel by its witness of friendship with the Muslim people and having as its icon the Virgin Mary visiting her relative Elizabeth: a Church that preaches Jesus without being able to speak expressly about Him, but which makes His message perceptible through sincere friendship and the service of love”.