"Certain that it will arrive, we await the birth of light"

In Piero della Francesca's “Madonna del Parto” we find the meaning of Advent: Mary is certain of the baby she is expecting, the Son of God. There is no-one better than the Virgin Mary to personally accompany us in this period of waiting which focuses on the unique, indestructible -and also previously unavailable- link between life and death, between time and eternity. 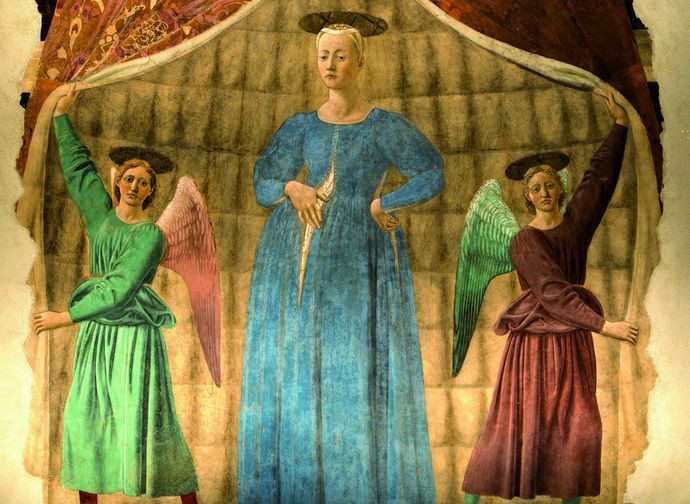 What greater beginning could there have been to salvation history than that of Mary, pregnant, alone  with her Mystery, yet certain of what was doubtful or shameful for others?

In the Augustinian context, the iconography of the expectant Virgin Mary develops in contrast with those who interpret the Lord’s Incarnation as a mystical event. It sheds light on the theological truth of Mary who is actually "expecting" her baby, the Son of God. Pregnant Madonna art flourished from the thirteenth century onward. Some of this artwork underwent alterations or were painted over, similarly to what happened with Nursing Virgins (Madonne del Latte) because they were considered improper due to a mistaken devotion to the Virgin Mary. Among these, there is the wonderful version by Piero della Francesca, known as the Madonna di Monterchi.

Piero della Francesca’s masterpiece is also pregnant with his own pain, caused by an illness he suffered and then followed by the death of his mother who was from the town of Monterchi (Arezzo, Italy). His fresco was completed for the ancient church of Santa Maria di Momentana, where pregnant women would visit to pray for grace to help themselves and their unborn children. Around 1785, the church was partly destroyed to build a cemetery. Despite this, his fresco remained intact as if to accompany the faithful towards the great and final rebirth that awaits us all: after passing from life to death, we pass from the womb of the earth to the womb of God. Today, Italy’s art authorities have not decided on a suitable place for the Madonna del Parto, which has now been removed from the cemetery for safekeeping. However, precisely because of its history, the fresco remains a powerful sign of this mysterious period of waiting that accompanies Advent: Christ came, comes, and will come again. Yes, he comes for all of us at Christmas as a liturgical commemoration. He comes as the Truth in the Mysteries of Faith. But Christ comes even more so at the time of our death: the time when every veil falls and our eyes will see him.

There is no one more that the Virgin Mary herself who can personally accompany us in this period of waiting which focuses on the unique, indestructible -and also previously unavailable- link between life and death, between time and eternity.

Piero della Francesca’s Madonna del Parto announces the great event that changed human history. The fresco has two angels who are identical mirror images of each other (the artist used the same inverted sketch for each). The Madonna suddenly appears in front of two curtains being raised by the angels, thus visually completing the words of Psalm 24:  Mighty gates: lift up your heads! Ancient doors: rise up high! So the glorious king can enter! Let us echo the psalm by asking: Who is this King of glory? He is the Lord of the Armies, that is, the God of heavenly hosts. Moreover, two angels are present here to certify the identity of the unborn child with their posture and their colors. The Virgin is turned to the right, probably facing the true light of the place she originally came. Piero della Francesca, however, captures her position with a deeper meaning. Indeed, he strengthens its meaning by exalting the light that strikes the curtains and the angels, affecting even the hue of the color of their clothes.

For those of us who, like the Jews, write from right to left, the future, we notice the light enters also from left to right. Thus, here the light comes from the future and the Virgin Mary turns towards that source of light: it is the Eastern light she carries in her womb but which believers turn toward in expectation.

The face of the angel on the right, in fact, is dark and wears the brown clothes of a coming autumn, soon to die in the winter of absence of God and faith. The other angel, on the other hand, is green, like spring and holding up a brightly lit brocade fabric, announcing the time is ripe for salvation, as seen in the golden pomegranates patterned on the velvet.

Yet none of three figures looks toward light that seems to point to everything: the angels look at us while the Virgin is all caught up in her Mystery. He is not here nor there, Jesus said in the  Gospel. Do not believe those who will tell you the Savior is here, for He is there. Heaven itself has descended. He is where faith is. He is where grace is. Heaven is in the Virgin’s clothes. It is here where we should look. In her statuesque posture, Mary is like a tower of ivory: she rests on her feet with the pride of someone carrying the True Light in her womb. Her impressive face is royal, while she places her hand on her hip like a woman about to give birth, struggling to bear the weight of the child she carries inside her.

Christ has a very specific weight in human history: his humanity is real, historical, of real flesh and blood,  a humanity without which, as Teresa of Avila would say, there would be no salvation. But here the "towering" Virgin offers us a delicate and casual gesture. She shows us the true way of escape, the true place of contemplation, the true light of the fresco and, the intention of her hand: a white and shining cut in her womb. From that cut of light the Lord Jesus will come, the one expected by the Gentiles, the Messiah.

This is Advent. We set our gaze on the Author of life who judges everything. We understand that heaven has come to earth not because of human will, but because God permitted it. Mankind cannot be on God’s level and understand Him fully, but he is given a certain path to follow: it is the same path that God took to reveal Himself,  the way of humility which we learn in Advent. Often Piero della Francesca's tear in Mary’s garment reminds me of the tear in Fontana's canvas. But if in the latter there is the will of mankind to dominate reality, in Piero della Francesca’s art there is a humble display of beauty that can only be seen with amazement.

Advent is also this: our enduring and prayerful abandonment to the amazement of a coming God. We are certain that He is coming, because He has already come. We are also certain that He will come and this is our other great expectation. We wait not for death, but for a birth of light, just as Piero della Francesca’s Madonna del Parto reassured us in the ancient cemetery of Monterchi.