Not only the Visegrád countries, former European members of the Warsaw Pact, but also the Baltic countries, Austria, Greece, Cyprus and Denmark: when twelve EU countries ask to erect physical barriers against illegal immigration, Brussels doesn't know how to respond. Yet the Western countries most affected by the phenomenon, are still aiming for inclusion 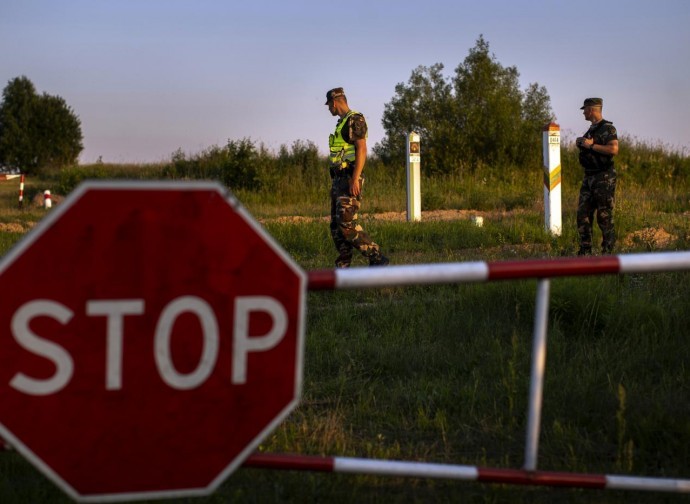 The request submitted on 8 October by 12 EU countries to the European Commission to modify Schengen border controls and allow states to erect "physical barriers" to protect the external borders of the Union, financed by the EU budget, was supported by the Slovenian presidency of the EU Council.
The letter asks the Commission to allow "Member States to act swiftly and proportionally to the threat, in defence of their national security and the security of whole EU", arguing that "in practice border surveillance does not stop people from attempting illegal border crossings and it would therefore be useful to complement it with further preventive measures ".

“Physical barrier appears to be an effective border protection measure that serves the interest of whole EU, not just Member States of first arrival. This legitimate measure should be additionally and adequately funded from the EU budget as a matter of priority. This should also apply at the Green Line, in the case of Cyprus, which does not constitute an external border.To ensure an effective and immediate response to the instrumentalisation of the migration flows, we need European solutions without any delay. We are convinced that it is more pertinent and sustainable to proactively focus on stronger border protection, common standards for external border surveillance and prevention of illegal border crossings. We need new tools that would let us to avoid rather than deal afterwards with grave consequences of overburdened migration and asylum systems and exhausted accommodation capacities, eventually negatively affecting public’s trust in our ability to act decisively when needed.”

For the 12 countries, to which should be added Slovenia which holds the rotating presidency of the Council, EU funds should finance a barrier along the Green Line in Cyprus, even though it is not an external EU border because Brussels has never recognised the Turkish occupation of the northern part of the island. The letter, revealed by the EU Observer, is signed by the ministers of Austria, Bulgaria, Cyprus, the Czech Republic, Denmark, Estonia, Greece, Hungary, Lithuania, Latvia, Poland and Slovakia. The list, however, does not include the states that founded the EU, above all those from Western Europe and that suffer the most from illegal immigration. They continue to focus on hospitality and inclusion, even if among the signatories feature not only the four nations of the so-called Visegrád Group but half of the EU Member States.

There are Mediterranean countries under pressure, such as Cyprus and Greece caused by the flux of illegal immigrants fuelled by neighbouring Turkey, as are European nations located along the so-called "Balkan route" including Denmark governed by the Social Democratic Prime Minister Mette Fredriksen. On the other hand, the Commission does not like the proposal because of its principles, since it intends to support the idea that Europe locks its borders to the peoples of the third world: moreover, the Commission isn’t advancing with the so-called "migration pact" proposed in September 2020, a politically correct mess that many nations do not like because it does not stop illegal entries or implement reprisals against their countries of origin.

It should be recognised, however, that in recent months Brussels has repeatedly shown support for the walls erected by the Baltics and Poles on the border with Belarus to stop the Afro-Asian illegal immigrants (from Iraq, Congo Brazzaville, Cameroon and Syria) that Minsk has deliberately brought to its territory to send on to the Union’s borders. But this is above all a political gesture in the context of the standoff that has been going on for months with Minsk, after the sanctions imposed by the EU on the Belarusian regime. "We really need - said the Commissioner for Internal Affairs Ylva Johansson - to strengthen the protection of the EU's external borders. Some Member States build barriers and I understand them. I have nothing against it. But I don't think it is a good idea to use EU funds ", which are" limited "and are used for other things, to "build them".

"This summer was very hard and difficult for Lithuania," said Lithuanian Interior Minister Agné Bilotaité. “Illegal immigration is a hybrid attack on Lithuania and all of Europe. In this situation, changes in the EU legal framework and in migration policies are needed, because we should be able to respond more strongly when we face hybrid attacks of this type." The relevant political and social fact doesn’t change, that almost half of the EU member states expect the Union to make a direct commitment to erecting barriers at the external borders confirming in fact how shrewd and far-sighted both the policies launched in recent years by Viktor Orban's Hungary and the Lega in the first Italian government of the current legislature were.

But for Italy, the concept of "walls" is hardly practicable, it has to deal with illegal immigration that moves largely from the African and Turkish shores of the Mediterranean, but the concept remains the same: to prevent the arrival, disembarkation or transit of those who do not qualify to reach Europe. As the EU is in a deep crisis, partly due to the home goal it scored by exerting pressure on Poland, which is supported by Hungary and the Visegrád Group, the vicissitude of walls and immigration risks striking a decisive blow to the Von der Leyen Commission itself.

The Slovenian Interior Minister Ales Hojs points out that “after the disaster of 2015, Slovenia decided to erect barriers, at its own expense, on part of the Croatian border, and will continue to do so in the future. It is clear that if we stop 14,000 irregular migrants a year at an internal EU border, then the protection of the EU's external border is not efficient. And it is our duty to protect the borders. Slovenia will support this proposal.” Whereas, German criticism of Greece, for the alleged illegal pushbacks by the Athens authorities, sparked a harsh Hellenic response.

Interior Minister Notis Mitarachi said that Greece will investigate these illegal "alleged pushbacks", but stated that "we expect the European Commission to do much more for the external dimension, for the protection of external borders, for the repatriation of those who do not have the right to international protection "and to enforce the agreements made with Turkey in 2016." Every rubber dinghy that leaves the Turkish coast "violates that agreement".

The issue of migration will be on the European Council’s agenda on the 21st and 22nd of October but it would be illusory to expect any significant developments. There will be no talk of the redistribution of migrants since the issue is too divisive, nor obviously of pushbacks that the EU a priori excludes, but which some member states are already applying without hesitation. However, it will be difficult to evade the issue of defending external borders, even with walls. It’s an issue that should also interest Italy whose government, despite the harsh internal and external criticism expressed by the majority, continues to welcome anyone who pays criminals to reach its shores with the result that flows to Italy have increased by 208 percent compared to last year. 49,000 landed from the sea alone, double 2020 and six times the number of illegal immigrants in 2019.