Castrated for the environment. The new anti-life campaign

Nine years ago, World Vasectomy Day promoted in appealing terms a painful practice: the sterilisation of the male, a partial castration. Throughout the West, the media today advertise the practice as an alternative to abortion. And above all as an 'ethical' choice to save the planet from overpopulation. 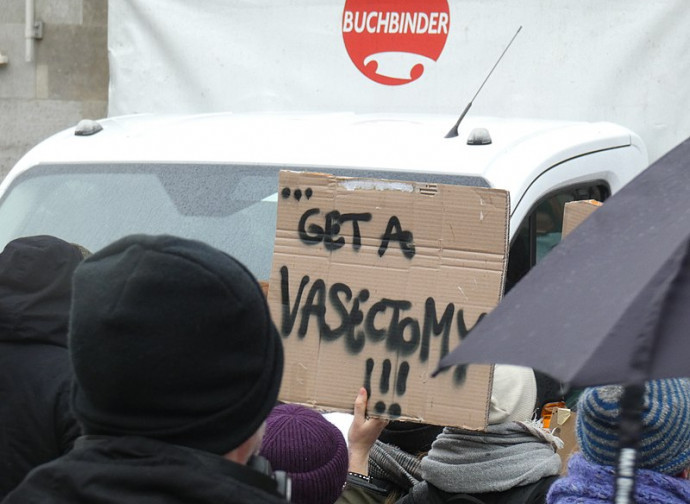 Almost a decade ago the Bussola commented on the launch of 'World Vasectomy Day'; in simple terms a vasectomy (aka ‘the snip’) is the partial castration of men through cutting or sealing the ductus deferens, the tubes that carry sperm to the penis. A few months ago, a worldwide mass media campaign began in the West to promote this dreadful practice, touted as a form of responsible solidarity with women and against abortion restrictions in various countries, and also as an extraordinary act of generous decision-making to save the planet.

Nine years ago, vasectomy was promoted, even with a live video broadcast of operations in Australia, sponsored by Planned Parenthood and especially WHO, in the Asian regions of the globe. The advertised intention was to fight hunger by eliminating with abortion, contraception, laparoscopies, and vasectomies the lives of unborn children and/or the procreative integrity of women and men. The Malthusian, hence eugenic, message was not very popular at the time, and this was confirmed by the concern of Dr Stein, who had participated in the live vasectomies: "The hardest part is to make vasectomy look attractive". Now the world's puppet masters seem to have found two new strategies to spread the dogmas of Malthus, his atavistic racism now directed towards Western males.

On 13 August last, London’s sinister The Guardian launched the campaign with an appeal to all those who promote human life from conception: Are you against abortion? Then consider getting a vasectomy. An absurd and raving title and content that nonetheless marked a path to promote the new trend desired by the devotees of Malthusianism (“the fewer of you who bring children into the world, the more secure we are in the saddle of power”). In the wake of the controversy surrounding the laws in Texas and Mississippi restricting abortion, many Hollywood actors and actresses last September called in protest for “laws forcing men to have vasectomies”. These demands were promptly met in October by Pennsylvania Democratic Congressman Christopher Rabb, who introduced a forced vasectomy bill on all males who had fathered at least three children or who were at least 40 years old.

At the beginning of December, it was the Australian mass media network ABC that highlighted and extolled the exemplary decision of Aaron, a 24-year-old who was so galvanised by “alarmist hoaxes about the end of the planet” that he described his drastic decision to “save the earth” with his own vasectomy. Then there were more articles in The Guardian in favour of the responsible choice of many climate change protesters not to have children and to sacrifice their fertility to “save the planet”. On 26 and 27 December it was then the Washington Post that reported on the heroic growth of “acts of love” by men across the United States who decided to undergo a vasectomy to show their solidarity with American women subjected to laws restricting abortion.

In a nutshell: men, get castrated, because women could be banned from killing the children they are carrying. In the 'medical' field, the 'vasectomy king’ and co-founder of 'World Vasectomy Day', Doug Stein has declared that he is increasing his trips and conferences around the world to present his techniques and spread the act of love of male castration. On 29 December, it was TV polemicist and fiery Democrat supporter Keith Olbermann who attacked Republican Senator Mitt Romney on social media for posting a picture of his large family in his Christmas greetings after urging him to impose vasectomy on his children. The number of vasectomy operations in many US states has risen by at least 15% in recent months, and it is mainly young men of liberal persuasion who are undergoing the operation spontaneously, out of solidarity and protest against pro-life laws. In these first weeks of January, the campaign for world population control, with the suppression of male fertility, has not diminished at all.

Deutche Welle has recently posted a short video on its website extolling the responsible and happy choices of many young Germans who have decided to love planet earth to the point of not wanting children for the rest of their lives (‘Child free for the climate’). In England, even Westminster Parliament was reminded on 11 January of the role that vasectomy could play in tackling the global eco-crisis, a theme raised by the Liberal Democrat Lord Jones of Cheltenham, asking politicians to set a good example and the government to adopt a policy requiring fathers of large English families to undergo vasectomy to avoid the real tragedy of the planet: overpopulation.

The spectre of eugenics and Malthusianism, in its loving and persuasive guise, now wants to drag young and adult males to ruin. Last week’s article in The Guardian confirms this: the campaign of climate terrorism against western youths and adults is underway. The "act of love" that wants to impose the sterilisation of young people and adults is now to be added to the "act of love" that spread euthanasia in all the countries of the world. It is not a simple coincidence; it is the tyranny of today's power that wants to erase the past and the future of humanity