Carlo Acutis will be beatified: The Church of child Saints is here

Last Friday, Pope Francis authorised the decree approving the miracle which took place through the intercession of Carlo Acutis. Here is the story of the miracle in detail. This young man who was in love with Jesus in the Eucharist will be beatified, bringing joy to his parents, young people who are devoted to him, and to the entire Church. Just as John Paul II prophesied: the little ones will be the new saints and prophets of a Church full of faith and hope. 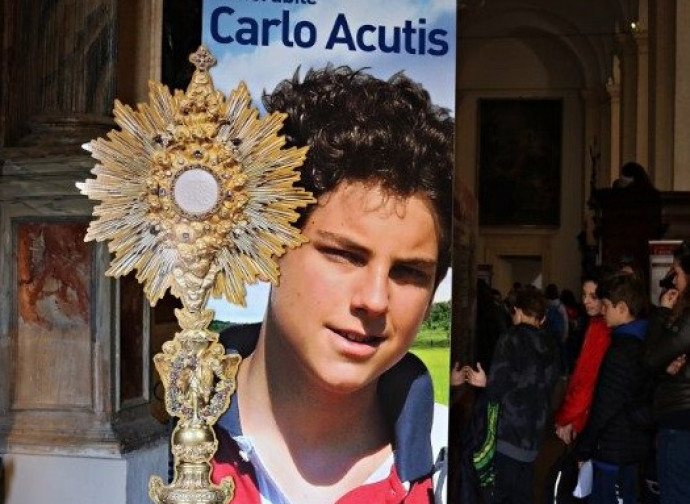 “There will be saints and apostles among children!” said Saint John Paul II in 1994 during a catechesis on the apostolate of the laity. He recalled the extraordinary importance of the prayer of children for the Holy Father, for the Church, and for the salvation of the entire world.

The news of the upcoming beatification of Carlo Acutis, the 15-year old who gave his life for Jesus in the Eucharistic, means we can say with certainty that the prophecy of the great pope, himself now a saint, has begun to be fulfilled. And the heart of the Church is celebrating, not only because of beloved Carlo, but because it understands that he is “only the first” of a group of holy children who are at work to make faith and hope reflourish in the Church of the present and the future.

The Decree of the Pope and the Joy of the Church

On February 21, 2020, Pope Francis received Cardinal Angelo Becciu, Prefect of the Congregation of the Causes of the Saints. During the audience, the Supreme Pontiff authorised the same Congregation to promulgate the decree regarding “the miracle, attributed to the intercession of the Venerable Servant of God Carlo Acutis, layman; born on May 3, 1991 in London (England) and died October 12, 2006 in Monza (Italy).” The Mass of Beatification for Carlo will be celebrated in the spring.

“A great joy for this particular Church that saw him walk in the footsteps of Saint Francis towards holiness. A great joy for the Ambrosian Church that was his home and accompanied him in his encounter with Christ. A great joy for the many people who are already devoted to Carlo throughout the world. A great joy above all for young people who find in Carlo a model of life.” So reads a statement by Bishop Domenico Sorrentino of the Diocese of Assisi-Nocera Umbra-Gualdo Tadino. He continues: “At the sanctuary of the Spogliation (where his remains are located), together with Francis of Assisi who here in this same place stripped himself of everything for Christ in this same place, Carlo is already attracting thousands of young people and devotees from all over the world. I hope that his beatification can make him even more a point of reference, encouraging people to holiness. Holiness is a vocation for everyone, even for young people.”

The story of the miracle that will permit Carlo Acutis to be raised to the altars is told directly by  Father Marcelo Tenorio, parish priest of San Sebastiano in Brazil,  the church where it took place.

“About ten years ago,” Father Marcelo says, “I learnt Carlo through my godson, Rodrigo Luna. We immediately began to work to spread his story as much as possible, creating the Brazilian apostolate, “Carlo Acutis, the Angel of Youth.” In a short time many people were impressed by his life, and so Carlo began to be better known and loved here in Brazil. We have also made a bond with his family, and so each year we go to Assisi on pilgrimage to pray at dear Carlo’s tomb. We have often received news of healings and miracles from every corner of the country.”

The priest tells how, during one of his pilgrimages, he gave Carlo’s father an image of Our Lady of Aparecida, so that it could be placed in his son’s room in Milan. “I asked the Blessed Mother that the miracle for his beatification would take place here in Brazil,” Father Marcelo explains. “I believed that placing her image in Carlo’s room would assure this. And what a surprise! Not only did the miracle happen in Brazil, it happened right here in our parish of San Sebastiano.

Here is the story of the miracle. The Brazilian priest explains: “On October 12, 2010, in our parish, at the moment of benediction with the relic of Carlo Acutis in the chapel of Our Lady of Aparecida, a child came forward, accompanied by his grandfather, who suffered from annular pancreas, a very serious congenital disease that is deadly. The disease made the boy continually vomit, and so he became weaker and weaker – his body rejected everything he ate, even liquids. He came to church with a towel because his condition was obviously very serious. This affliction made him grow weaker and weaker, and the little boy was surely going to die.”

When they got in line to receive the blessing, the boy asked his grandfather what sort of grace he should ask for. “Ask to stop vomiting,” his grandfather immediately replied. And so he did. When it was his turn, the boy touched the reliquary holding Carlo’s relic and said in a firm voice: “To stop vomiting!” And from that moment on he has never vomited again. Following this, in February 2011, the boy’s family had him undergo new medical tests which demonstrate his complete healing.

The Dream of Mamma Antonia

Needless to say, Carlo’s parents are overjoyed. Living alongside their very special son day by day, they were able to sense his holiness. Carlo’s holiness found its exceptional foundation in Jesus in the Eucharistic and a vibrant love for the Blessed Mother, as we have already shared in an interview with Carlo’s mother Antonia. It is enough to recall that Carlo always repeated that the Holy Eucharist was his “highway to heaven” and the Blessed Mother was “the only woman of his life.” And so it’s also no coincidence that the miracle for his beatification came about as a result of the Mother of God’s personal intercession.

On this occasion of the news of his beatification, Mamma Antonia has revealed to everyone a secret of Carlo’s holy story: “When my son was already on the point of death, one night I saw Saint Francis in a dream, and he told me that Carlo would be “high up in the Church.”  She continued,  “At that moment, I did not understand what this meant. I only saw the image of this Church with Carlo there, raised high. Only later was I able to truly comprehend that dream: Saint Francis was indicating to me that the Lord would not take Carlo to be with him. But along with this, there was also a great design of Mercy: Today Carlo is doing good to so many people, above all to so many young people all over the world.” Carlo is so loved and followed because his path was at its heart a radical path walked in simplicity and truth: he made Christ and His Sacraments, the only true source of sanctification, the centre of his life.

[The story of Carlo Acutis is told in the book by The Daily Compass: "Il chicco di grano. Storie di Santi giovani in mezzo a noi"]