Cardinal Puljić : “My own life and the lives of Bosnian Catholics are in danger”

A Mass celebrated by Cardinal Vinko Puljić in memorial of  victims of massacres committed by Tito's partisans has sparked heated controversy. Puljić was accused of wanting to rehabilitate a Croatian pro-Nazi regime. Despite delivering a moving homily, the reaction was so violent that the cardinal says he believes his own life and the lives of all Catholics in Bosnia and Herzegovina are in danger. He accused two members of the country’s presidential cabinet of being instigators of an anti-Catholic campaign whose aim is to obscure the barbaric massacre of innocent lives. 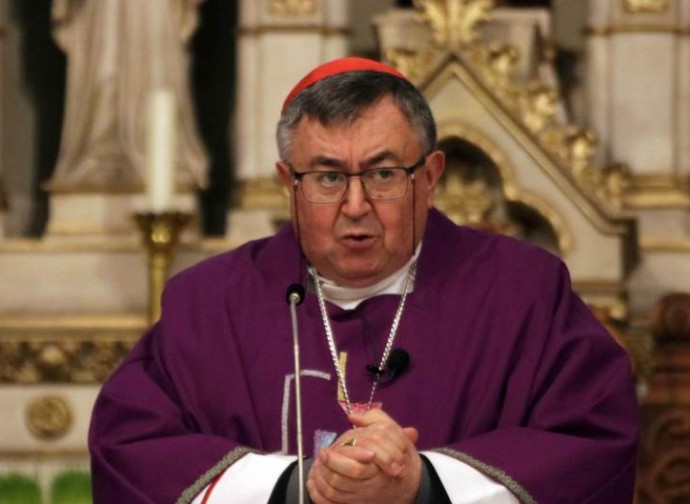 Communism is still alive and well in countries formed from the break up of Yugoslavia. This is evident in the media’s lynching of  Cardinal Vinko Puljić, the Archbishop of Vrhbosna. Puljić has been a victim of violence for a Mass he celebrated last Saturday, 16 May in Sarajevo’s Sacred Heart of Jesus Cathedral. The Catholic Mass was dedicated to the memory of victims of massacres committed by Tito’s partisans. The massacres are commonly known as the "Croatian Via Crucis." In May of 1945, between the towns of Macelj (Croatia), Celje and Maribor (Slovenia) and Bleiburg (Austria), tens of thousands of fleeing Croatians (soldiers and unarmed civilians) were mowed down by machine guns. Thousands more were captured and forced to carry out gruelling long marches to various detention centres as wartime prisoners.

This commemoration takes place every year in Bleiburg. Each year a different Croatian bishop presides at the Mass. Due to the ongoing coronavirus emergency, this year’s organizers divided the event among three different locations: Bleiburg, Zagreb and Sarajevo, where Cardinal Puljić was chosen to preside.

The announcement of the 16 May Mass sparked heated controversy in Bosnia, since Puljić was accused of wanting to rehabilitate the pro-Nazi Croatian regime linked to the NDH (the Croatian Independent State), an ally of the Axis powers during World War II. Reactions against him were so so violent that Puljić said he believed his own life and the lives of all Catholics in Bosnia and Herzegovina were in serious danger. In addition, the cardinal explicitly accused two pro-Bosnian members of the country’s presidential cabinet, Komšić and Džaferović, of instigating an anti-Catholic and anti-Roman press campaign. During a protest held in Sarajevo (with roughly 5,000 people according to the Oslobođenje), explicit death threats and transgressions against the Archbishop were reported.

It is not surprising that in Croatia and in other countries of the former Yugoslavia, the left continues to justify the crimes of Tito’s partisans. However, it considers prayers of intercessions for victims of the Bleiburg massacres a call of renewal for the Ustasha regime. They are, in fact, the same political and socio-cultural forces that make out Cardinal Alojzije Stepinac to be a pro-Nazi archbishop. These are the same leftists who still speak about the "liberation of Trieste" by Tito’s allies in May of 1945. They are the same people who claim that the massacres committed against anti-Fascist Italian and German minorities were well deserved (over a few months 51,000 Volksdeutschen from northern Croatia and Vojvodina were also massacred).

However, what happened during the infamous "Croatian Via Crucis" in May of 1945? Already in late 1944 and early 1945, Zagreb had become a refuge for many fleeing NDH territories occupied by partisans who had been slaughtering opponents everywhere. Towards the end of April 1945, the arrival of Tito’s partisans in Zagreb was considered imminent. Panic overtook the city. Huge groups of soldiers and civilians, especially women, elderly and children, made their way on foot to Slovenia with the hope of seeking refuge in Allied-occupied regions of Austria or Italy. Once they arrived in Austria and encountered British army, the Croatian soldiers and private civilians were sent back to Tito’s troops in close pursuit. The British did this, even though they well knew that fate that awaited the Croatians after being captured by Tito’s partisans: slavery, torture and death.

Tito’s troops carried out the massacres along the entire escape route of this large mass of people. To name a few of these places and the number of victims: about 13,000 people were killed in Macelj, then buried in mass graves or thrown into the sinkholes in the area; 2000 Croatians, 700 Slovenians and 300 Germans were thrown into the Huda Jama mine, not far from Celje; and as confirmed by Montenegrin partisan Vlado Dapčević in an interview, "30,000 Ustasha were shot and killed in Maribor over the course of three days." Another 5,000 Croatian, Slovenian and German soldiers and civilians were murdered in Tito’s concentration camp in Teharje in June of 1945. In Tezno between 15,000 and 20,000 people were also killed.

As witnessed by Serbian partisan Simo Dubajić, 30,000 prisoners of war were released in Kočevši Rog.  Every night 5 or 6 full train carriages would transport detainees from concentration camps in Ljubljana, Jesenice and Šentvid. Once released, they would be mowed down by machine guns. Then partisan troop finished them off with explosives to guarantee that no one would survive. Dubajić repented of his wrongdoing, converted to Orthodox Christianity. Before dying, he had wanted to confess what he had done in an interview on Slovenian television. Finally, Croatian soldiers and unarmed civilians were fired upon by machine guns in the Bleiburg flatlands, leaving a trail of thousands of corpses.

Research started in 1991 made it possible to discover 600 mass graves in Slovenian sinkholes. Another 100 were found in Bosnia and Herzegovina (in Herzegovina alone 20,000 victims were tallied). 850 mass graves were unearthed in Croatia. Among the best known is that of Jazovka, not far from Zagreb, where 450 people were killed and thrown into a sinkhole. The corpses were wounded soldiers, medical personnel and nuns from Sveti Duh hospitals and the Sisters of Charity living in Zagreb at the time.

As the priest Fr. Ante Baković reports in his book Croation Martyrology of the Twentieth Century, between 1945 and 1955, 660 Catholic priests were killed. He breaks done the tragic figures. According to Baković,  53 priests lost their lives in Anglo-American bombings, by landmines, grenades, and attacks on trains and buses. Another 109 clerics were murdered without trial in mass killings while 338 were cruelly tortured and killed (burned alive, massacred, slaughtered, roasted on grills, and beaten to death). 80 more priests were sentenced to death and executed (by partisans, members of military and civil courts, communist youth, and Tito’s own party members). 72 others died from physical and mental torture, starvation, weakened bodies, and various illnesses while locked up in jails, prisons camps, and detentions centres). 4 other priests were poisoned and 7 died by unknown means (they were somehow killed or simply disappeared during and after the war).

Only a fraction of the victims belonged to Ustasha militias or NDH political leaders. They were not, as Serbs and leftists claim, guards within the Ustasha concentration camp in Jasenovac where tens of thousands of Jews were put to death, in addition to many Serbs and gypsies. The victims of the May 1945 massacres were overwhelmingly unarmed civilians or simply Croatian soldiers or officers who had not been found guilty of any crimes whatsoever. Prayers of intercession meant for the Bleiburg victims, therefore, does not represent a rehabilitation of the Ustasha regime, especially since the Catholic Church has resolutely  condemned it. In his 2015 homily on the 70th anniversary of the Bleiburg massacre, the Archbishop of Zagreb, Cardinal Josip Bozanić, spoke of three great evils that had devastated the twentieth century: Fascism, Nazism, and Communism. His sermon offered sincere words of sympathy for the tens of thousands who died tragically. He spoke about persons, while young and in the prime of their lives, who nevertheless died without being found guilty of any particular crime.

In moving homily of May 16, Cardinal Puljić first quoted St. John Paul II, namely what the pope would have said on the occasion if his visit to Sarajevo in 1994 hadn’t been cancelled: “The fate of peace depends above all on a renewed solidarity of hearts, and, after such a shedding of blood and hatred, it presupposes the courage of forgiveness.” Puljić went on to say that all cultures, whether Christian or pagan, have always had respect for the dead and their burial places. He exhorted those listening to him:  "We must not forget our dead ... especially when it is hatred that killed them. Above all, we cannot forget those who ended their earthly lives under such grave circumstances. We must remember those who were tortured and lost their lives in such inhuman ways. What kind of values ​​does someone have who shows no respect for these victims? I am afraid to live with men for whom nothing is sacred and who are able to trample on what is sacred to others!”

After recalling the victims of every race, religion and nationality who died in the Balkan wars of mass bloodshed last century, Puljić underscored that a no peace process or reconciliation can be built if not first founded upon truth. Only by accepting the truth, however bitter it is he said, can space be freed for creating a climate of trust. The Archbishop of Vrhbosna added, "Whoever does not want the truth, approves the evil that they defends. And, in this way, they favour an adverse climate among people. They are not peacemakers, but advocates of evil. No crime whatsoever  can be defended. Whoever does not dissociate themselves from this wrongdoing, then participates in it and is equally responsible for the crime.

The Cardinal’s words were not received well by cabinet member Željko who, after Mass in the cathedral, stated in a triumphal tone that "the enemies of this city did not prevail." Evidently, Željko’s "enemies" are Croatian Catholics. We should be fearful of what has occurred these days. It has further weakened the already fragile foundations on which various ethnic groups in Bosnia and Herzegovina may indeed peacefully coexist.