Pope Benedict's visit to the United Kingdom in 2010 is still a living memory for the President of the Catholic bishops of England and Wales: "I never thought I would witness an event like this". The testimony of a mother of two teenagers: “15 minutes of absolute silence led by Pope Benedict before the blessed sacrament: my children learned more about prayer than I had ever been able to teach them”. The Daily Compass met Cardinal Nichols in Rome on the occasion of the funeral of Benedict XVI. 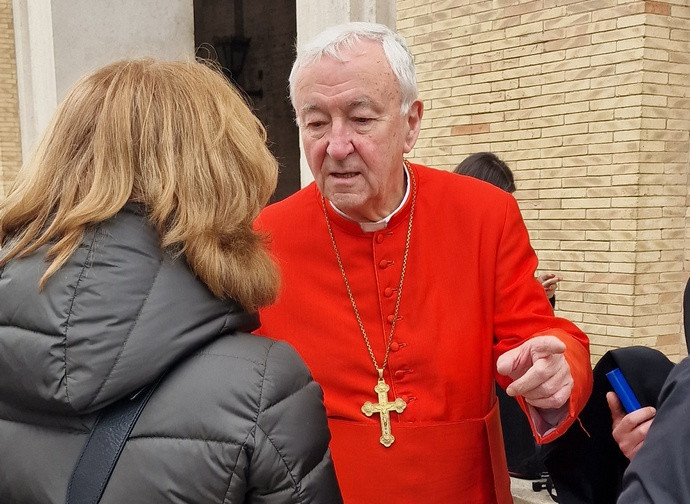 “I will never forget that moment of prayer, when there was absolute silence for 15 minutes, led by Pope Benedict before the blessed sacrament.” “Afterwards a mother wrote to me: ‘I was there with my two teenage boys. In those 15 minutes, they learned more about prayer than I had ever been able to teach them’.” Speaking to the Daily Compass in Saint Peter’s Square after Pope Benedict’s Requiem Mass on February 5, Cardinal Vincent Nichols, Archbishop of Westminster and President of the Catholic Bishops' Conference of England and Wales, said this was one of his most vivid memories of Pope Benedict XVI visit to the UK in 2010. A lesson that intense prayer and the deepest relationship with God are found in silence.

Pope Benedict's visit marked a glorious moment for the Catholic Church in Britain. And “that remarkable event” dominated the Cardinal’s every recollection of Pope Benedict during our conversation. He confided that he had been contemplating his memories of the deceased pope during the mass: a series of flashbacks of Benedict’s four-day state visit to England and Scotland in September 2010. He recalled, “the rapturous welcome the Bishop of Rome had received despite the 400 year-long struggle the UK had experienced in its relationship to the Catholic Church”. “I never thought I would witness an event like that, such an overwhelming response to Benedict’s visit, it still resonates”, he had previously commented in an interview for CBCEW.  Moreover, a few months later, the BBC proclaimed Pope Benedict Person of the Year 2010.

We discussed Pope Benedict’s Spiritual Testament and in response to the question what advice he would give the faithful on the pope’s encouragement: Stand firm in the faith! Do not let yourselves be confused! Cardinal Nichols picked two distinct and indicative moments from Benedict’s historic visit to England 12 years ago.

He began from a letter, he had received before leaving for Rome, from Conservative Cabinet Minister Michael Gove. “‘This is remarkable,’” Gove had written to Nichols, referring to the meeting in Twickenham that had taken place between the Pope and 3,500 school children in 2010. As British Secretary of State for Education at that time, Gove had witnessed the event. “His summons to the children was to find a way of life that brought them lasting happiness,” he had written. Nichols continued, “and in the Pope’s presentation that was in the knowledge of Jesus and their relationship with God. So Benedict’s directions to us are a lot to do with our knowledge of the Lord, his two great volumes in English, Jesus of Nazareth, and the ability to pray.” “In fact, I will never forget the moment of prayer in Hyde Park in 2010 when there was 15 minutes of absolute silence led by Pope Benedict before the blessed sacrament.” “Absolute silence”, he repeated. “And a couple of days later I had a letter from a mother who wrote, ‘I was there with my two teenage boys. And in those 15 minutes, they learned more about prayer than I had ever been able to teach them,’” said the Cardinal. “So it’s knowledge of Jesus, entering into that relationship in prayer and the peace and happiness that that will give in our lives.”

To a question on what significance he would give to Benedict’s period as pope and the period after his resignation which privileged prayer and his relationship with God, Nichols replied, “we could go back to the Benedictine motto: ora et labora, prayer and work, the two things go together, there was a complementarity, but no doubt as every person as they get older, we have a greater appetite for quietness and stillness and just stepping back a bit from the rush of the age. I think Benedict gave a great example of that. But I wouldn’t contrast or try and judge the unfolding of life, it has a wholeness to it and I wouldn’t break it into different sections.”

At this point, Cardinal Nichols made a swift turn in the direction of the Vatican, disappearing into the distance between the last stragglers from the crowd of 50,000 that had filled the square moments earlier. It was too late to ask if he had joined in or shared the sentiments of the group of clerics (approximately 3,700 priests) shouting to Pope Francis at the end of the Requiem to make Benedict “Santo Subito” (Sainthood immediately). From his grief stricken face, it was evident that Pope Benedict, the “humble shepherd”, is still a powerful presence in his life today.