Cardinal Duka: Ratzinger, an example of faith rooted in truth

“In Germany, Cardinal Marx and Bishop Bätzing represent a current that wants to attack Ratzinger.” “Sexual abuse is not a crime committed by the Church, they are crimes committed by people. These reports that go back 100 years are not a search to clean up, but a trial against the Church.” “Someone wants to use the abuses to change the teaching of the Church.” The Archbishop of Prague speaks out. 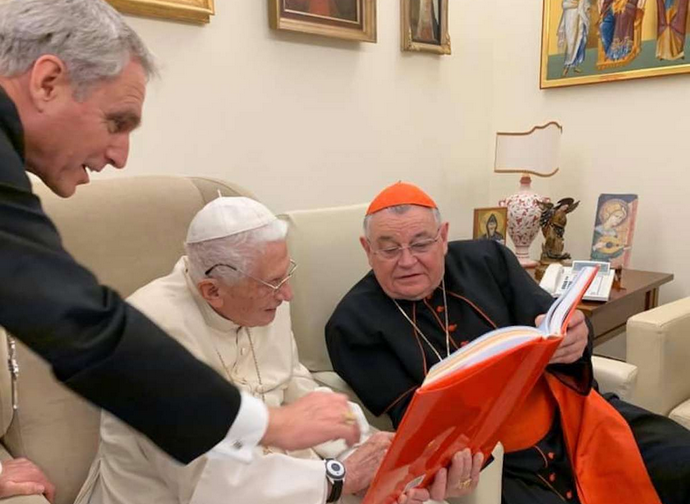 “Let your talk be: yes, yes; no no”. Cardinal Dominik Jaroslav Duka, 79 years old in a few days time, is used to putting this evangelical teaching into practice in his own life. Recently, one such occasion concerned his public protest on the way the Archdiocese of Munich and Freising allowed Joseph Ratzinger’s name to be tarnished by the allegations contained in the report on sexual abuse. Furthermore, the archbishop of Prague has not spared criticism for the president of the German bishops, Monsignor Georg Bätzing, according to whom the pope emeritus should have apologised. These are the stands that the Dominican cardinal wanted reiterated in his interview with the Daily Compass on the occasion of Joseph Ratzinger’s 95th birthday.

Your Eminence, how important was Benedict XVI's pontificate - with his recurring warning against the dictatorship of relativism - in a highly secularised country like the Czech Republic?
Benedict XVI is a great theologian with a humble empathy towards mankind and society. He is an example of a man of faith. A faith rooted in truth. Karol Wojtyla and Joseph Ratzinger are two great figures for the Church just as Achille Ratti and Eugenio Pacelli were in the twentieth century. There was full collaboration between the latter during the pontificate of the former in a difficult period marked by the imminent outbreak of the Second World War, in the same way, there was great cooperation between John Paul II and Joseph Ratzinger, especially at a theological level. Ratzinger and Wojtyla were an important gift from God for central Europe: two popes very close to our history and our culture. John Paul II was a liberator of central Europe from the communist dictatorship and Benedict XVI was equally a gift because he understood our situation well, having lived through the terrible experience of the Nazi dictatorship.

During his apostolic visit to Prague, Benedict XVI quoted his friend Vaclav Havel on the link between truth and freedom. Did you have the impression that the Pope, who in his youth had lived under the Nazi dictatorship, had fully understood the danger of the "false ideologies of oppression and injustice" that you had suffered together with Havel, your fellow prisoner?
At Havel's funeral, which I presided over in Prague Castle in 2011, there were those who remembered that freedom is not the ultimate goal, but a way to the common good. This is exactly the vision of freedom that Ratzinger shared as well. I remember well his visit to the Czech Republic in 2009 during which he showed considerable empathy for our country. On that occasion, he was not only a preacher of faith, but also a professor of theology and a man of science in general. For this reason, during the meeting in the Vladislav Hall of Prague Castle, the entire academic world was present listening to him. The professors listened to him because they did not see him as someone on a throne, but as a colleague. It was a wonderful moment of great contact between the Church and society and also between faith and reason.

Recently, you "spoke out" in defence of the pope emeritus after the publication of the abuse report by the archdiocese of Munich. Did you feel you were somewhat on your own?
Certainly. Monsignor Georg Gänswein is right: in Germany there is a current that wants to attack Joseph Ratzinger. The attacks against him by Cardinal Reinhard Marx and Monsignor Georg Bätzing are unjust because when Ratzinger was archbishop of Munich he was not responsible for the case held against him, since the accused priest belonged to the diocese of Essen. But let me make an observation ..

Please do..
Abuses are not a crime committed by the Church, they are crimes committed by people. I am a bit doubtful about the possibility of reports being prepared that go back 100 years. It is not a real attempt to clean up, but it seems to me to conduct a trial. But I know the situation in the Czech Republic, and justice already exists in my homeland. These issues must be dealt with by justice because a bishop is not a judge, he is not a policeman, he has no experience in these fields. Our courts are ecclesiastical, but this is a criminal matter and therefore must be entrusted to criminal justice.

Regarding the abuses in the Church, the Pope Emeritus attributed the primary cause to the moral collapse resulting from the absence of God from 1968 onwards. Starting from the same problem, the German Synodal Way is reaching completely different conclusions and seems to even intend to modify points of the doctrine. Why has Ratzinger always been so little understood in his home country?
It seems that someone wants to make use of the problem of abuse to change everything else. This German Synodal Way is not a movement of the universal Church, they are groups. The statements that are released to German magazines by its protagonists are proof that there are those who would like to change the Church. They act as if the Church were not founded by Jesus Christ and His Apostles, but rather consider it a company or a political party. The assemblies of this Way are made up of a combination of the Episcopal Conference and the Central Committee of German Catholics. But this Committee looks rather like a political group of the Federal Republic of Germany. In recent times it resembles more a liberal party rather than a Christian reality.

Recently you had the opportunity to meet Benedict XVI: was he pleased with the article you wrote in his defence?
Ours was a meeting between senior bishops (laughs). This is my second visit to Benedict XVI in recent times. The first was before the pandemic, the latter for the spiritual exercises we followed in Rome with two other Czech bishops. I wanted to express my solidarity with Benedict XVI. He was a courageous man, as pope he did a considerable amount against abuses in the Church. He had already done a lot as prefect of the former Holy Office during the pontificate of John Paul II, preparing documents to counter the phenomenon.

Benedict XVI chose you as the successor to Cardinal Miloslav Vlk in Prague. He was also the one who created you cardinal in 2012. Have you ever wondered why?
I think the period I spent as a prisoner during the Communist dictatorship and the work I did immediately afterwards may have had an influence. With the end of communism, the first mission that was entrusted to me was the renewal of religious life in our homeland. I had been in prison with President Havel and knew most of the new free government. That was a period of major negotiations with the civil authorities. At the time, I already had contacts with John Paul II and also with Cardinal Joseph Ratzinger. I dealt with the reconstruction of the infrastructure of the Church in the Czech Republic first as a simple religious, then as a superior of the Dominicans and finally as a bishop in my original city.