Cardinal Bo wants the Church not to be the Church

​​​​​​Cardinal Charles Maung Bo, in an interview published in Matteo Matzuzzi's blog,  speaks in clear words that reveal confusion . The Church can no longer serve a bold mission because it must remain a feeble minority. The Church must be content to dwell inside the catacombs and with the intention of remaining there. The Church is the one who must be baptized and no longer the one that baptize others. But is this still the Church? 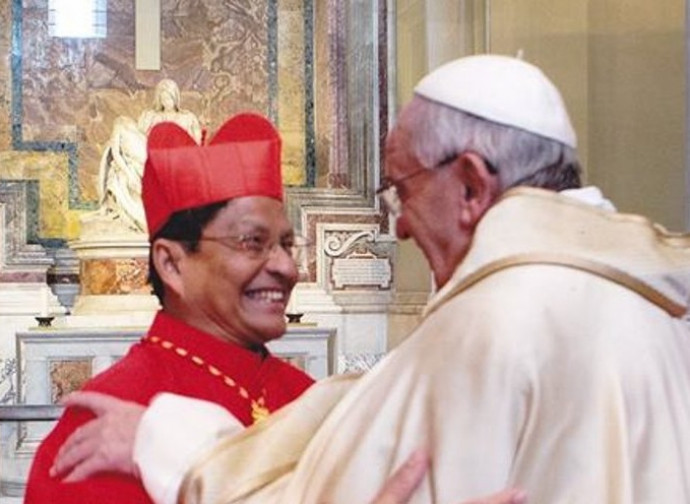 It is deeply disturbing to read that, in one Asian cardinal’s opinion, Christianity must be baptized into Eastern religions: "The Church needs to be baptized in the Jordan of Asian cultures, absorbing the simplicity and interiority of the Asian religion."

As we well know, baptizing means entering into a new divine life. Therefore, we are quite right in wondering exactly what divine life Eastern cultures have in purifying and elevating Christianity and the Catholic Church. It was always thought that it was Christianity which had the advantage of being able to confirm cultures in terms of the legitimate aspects of natural law and, in turn, purifying and elevating them by enlightening and giving them new life. Now we have a cardinal saying just the opposite. This is perplexing, to say the least.

Here we are referring to Cardinal Charles Maung Bo, the Archbishop of Yangon (Myanmar). Bo, who was made cardinal five years ago, is the head of a Church which is an extreme minority in his native Myanmar. His comments were published in an blog interview with Matteo Matzuzzi last 16 October.

Bo’s idea of “baptizing Christianity into Eastern religions is most problematic, theologically speaking. His statement presumes that Christianity is “Eastern” in origin and, thus, awaiting its ultimate return home after a deceiving “Western” journey. Bo’s opinion is unfounded, especially for historical reasons. At the time Jesus lived, Palesitine was a territory of the Roman Empire. Therefore, it leaned not east, but west in terms of civilization. Hence, it is difficult to speak about  Eastern origins in this regard.

It is therefore clear that, in the West, something was born  that was not merely Western and which could not be transformed into something Eastern. If Asian cardinals and bishops were to remain prisoners of this geographical-sociological conception of Christianity, it would be a real problem for the Church.

Cardinal Bo, in his interview, dismisses the European West as too "intellectual and analytical" and the Latin American West because it would have turned Christianity into a "mockery." Asia on the other hand, "with the profound meaning it gives to the inner energy and sacredness of the cosmos, is a fertile ground for the mystical and Trinitarian Jesus," Bo said. The Cardinal went on to say: "Without Asia, Christianity might have well been relegated to the history books. Neither Asia nor Africa want to contribute to this potential tragedy." Considering the fact that brief interviews, such as this one, tend not to dive deeply into the subject matter, let us at any rate take note of two serious errors of interpretation.

Christian mysticism, but also the simplest form of contemplation, has very little in common with Eastern mysticism. It is unfortunately so neglected today that even Pope Francis places Catholic monks on par with Buddhist monks. I believe that no theologian of religious pluralism, like Fr Jacques Dupuis, will ever be able to bridge this gap between the two contrasting visions of mysticism. The first is the development of metaphysical knowledge (without metaphysics there is no Catholic mysticism) while the second is a mysticism of renouncing the individual self to the Whole of the universe.

There is an astronomical difference between the Christian vision of the cosmos and that of Asian religions. For Christianity, the cosmos has been given to human co-creative responsibility. Christianity upholds a rational penetration and legitimate technical manipulation of nature. For Asian religions,  the cosmos is all-living universal whole in which the human being is not a lord but mere part of it.

As for the "tragedy" of a Christianity which aims to “ become history", we must bear in mind that this is inevitable since Christ is the Lord of history and it sounds strange that Asian cardinals are now questioning this. Of course, it is also difficult to think in this way without "Western" philosophy-theological categories,  but it is exactly this which explains that they were formulated in the west but are not exclusively western. If Asian Cardinals reject these categories for the first reason they miss the second as well, which is extremely serious.

The Catholic Church is a large minority in Myanmar. Cardinal Bo knows this, but he believes that this is how it should be, that Christ does not want a majority Church but a marginal one. As he said, "A handful of Christians shook the powerful Roman Empire with their robust witness of love. To speak of a ‘strong’ Church is, therefore, improper, since power and dominion are the antithesis of Christ's Church. The thousand years of the Church’s triumph and magnificence is over."

Cardinal Bo's words gives clear indication of the confusion enveloping today's Church. The Church is no longer on a bold mission because it must remain a feeble minority on the periphery. Its mission cannot be about power and dominion. The Church must be content to dwell inside the catacombs and with the intention of remaining there. It is the Church who must be baptized and not, vice versa, the Church who baptizes others. Fair enough, but is this still the Church?