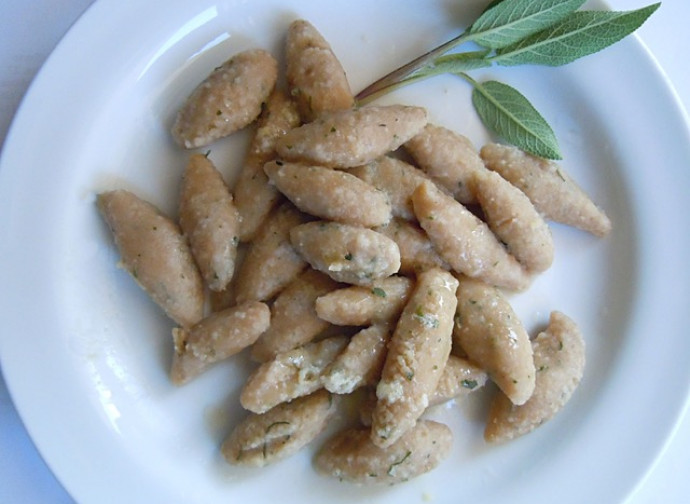 An ancient and mysterious Mantuan dish.
In homage to the artist mentioned today, Domenico Fetti, known as 'il Mantovano', we are sharing an ancient and mysterious recipe. Capunsei is a typical dish from the Mantuan gastronomic tradition. This recipe has been handed down orally for generations and is a typical expression of a peasant tradition. The name comes from 'picol capù', which means 'small capon', in comparison with capons, which were eaten in large quantities by the nobility and the wealthy of the area. These elongated gnocchi are often served with Grana Padano cheese and melted butter.

Preparation
Take the stale bread and use a mixer or blender to reduce it to very fine breadcrumbs. Collect the breadcrumbs in a bowl and add a good grating of nutmeg and a pinch of salt.
Place the butter cut into pieces in a small saucepan; heat over moderate heat so that it liquefies. Do not let the melted butter boil, to prevent it changing colour and turning brown. Then pour the melted butter into the bowl with the bread. Knead the breadcrumbs so that they absorb all the melted butter and it is evenly distributed. In the meantime, put 400ml of stock in another saucepan and heat it up until it comes to the boil. Once it comes to the boil, pour it into the bowl and start stirring with a wooden spoon.

Once the mixture is soaked through, let it cool. Once cool, add the grated Grana Padano cheese and the two eggs. Mix well until the mixture is smooth. Shape the dough into a ball in the bowl. Leave it to rest for about two hours.

After this time, take the dough and knead it with wet hands to form small elongated dumplings. These dumplings should be tapered and fairly compact, so roll them between the palms of your hands.

Take a pot, fill it with water and bring it to the boil. As soon as the water comes to the boil, add a pinch of salt and after about half a minute, pour in the capunsei. When the capunsei are cooked, they will rise to the surface of the boiling water. Collect them with a slotted spoon and put them into a serving tray.

Take the sage leaves and chop them finely, place them in a pan and add two large knobs of butter. Melt the butter until it becomes liquid and is flavoured with sage. Pour it over the capunsei. Finally cover them with a good sprinkling of grated Grana Padano cheese. The capunsei should be served piping hot.