Two recent contributions by monsignor Carlo Maria Viganò and monsignor Athanasius Schneider radically criticise the Second Vatican Council, which is held responsible for the current deviations from authentic faith. In the first case, they even go so far as to propose quashing that Council. But this is a serious error of perspective because the possible ambiguities or uncertainties of the conciliar documents have already been clarified by the subsequent magisterium of Saint John Paul II and Benedict XVI. As has always happened after a Council. 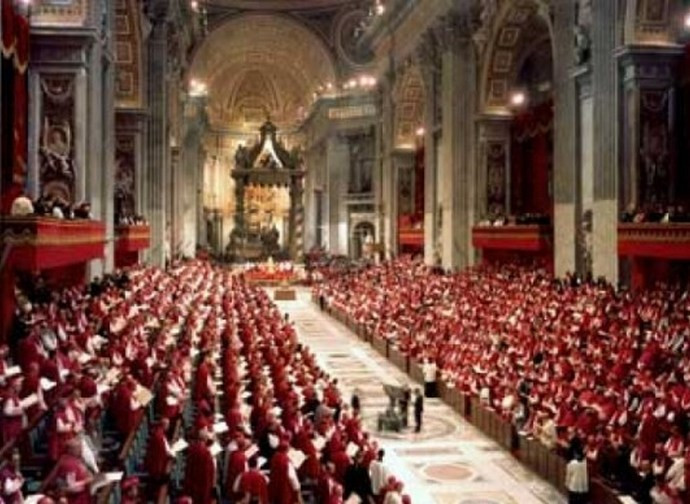 Recently there have been two substantial interventions on the Second Vatican Council and in particular concerning its teaching relative to religious freedom contained in the declaration Dignitatis Humanae.

On June 9, Abp. Carlo Maria Viganò published a long reflection whose fundamental thesis it seems to me may be found in one of its opening paragraphs: there is “a causal link between the principles enunciated or implied by Vatican II and their logical consequent effect in the doctrinal, moral, liturgical, and disciplinary deviations that have arisen and progressively developed to the present day. The monstrum generated in modernist circles could have at first been misleading, but it has grown and strengthened, so that today it shows itself for what it really is in its subversive and rebellious nature. The creature that was conceived at that time is always the same, and it would be naive to think that its perverse nature could change. Attempts to correct the conciliar excesses – invoking the hermeneutic of continuity – have proven unsuccessful: Naturam expellas furca, tamen usque recurret [Drive nature out with a pitchfork; she will come right back] (Horace, Epist. I,10,24).”

On June 27 Viganò again published an interview with the director of Catholic World News, Philip F. Lawler, reiterating more or less the idea of a mistake in the line of argument that particularly characterized the pontificate of Benedict XVI. The position of Viganò is essentially to quash Vatican II, consigning it to oblivion.

A different position has been expressed by Abp. Athanasius Schneider, who about a month ago on June 1 offered an articulate reflection on religious freedom to LifeSiteNews. According to Schneider, the Abu Dhabi document, signed by Pope Francis on February 4, 2019, is the logical development of an error present in the declaration Dignitatis Humanae. In Schneider’s assessment, the affirmation that God positively wills religious diversity descends consequentially from the conciliar affirmation of the right to not be forced “to act in a manner contrary to his own beliefs, whether privately or publicly, whether alone or in association with others, within due limits (DH, 2).

On June 24, Cardinal Walter Brandmüller entered the debate, publishing on Marco Tosatti’s blog  (see here) one of his recent conferences entitled The Second Vatican Council: The Difficulty of Interpretation. Brandmüller sheds light on the particular characteristics of this Council, which did not want to define dogmas but declared its pastoral character. However, this does not mean that the texts of Vatican II have only the authority of an informal chat among ecclesiastics. The remedy for those who want to dogmatize every intervention that happened in the Vatican Basilica during the assembly is not reducing the Council’s texts to the level of mere opinions. It is of fundamental importance to understand, the Cardinal explains, that “the binding character of the conciliar texts is thus of a different degree.”

The second point brought to light is the fact that the documents of the Council reflect a precise intention to be anchored in the Tradition. This is indicated by the numerous references to the Councils and preceding Popes, to the Fathers and Doctors of the Church. This significant fact indicates that the hermeneutical context of the documents of Vatican II is the Tradition of the Church: “A central tangible concern in many of Benedict XVI’s affirmations was to highlight the close organic connection of Vatican II with the rest of the Tradition of the Church, thereby highlighting that a hermeneutic that believes it sees in Vatican II a rupture with the Tradition is in error.”

In effect, Brandmüller says that it is not possible to hastily liquidate the hermeneutic of continuity by declaring it to be bankrupt; the reason is that there are no texts without contexts. The point is to understand what is the adequate interpretative criteria of a document that intends to express, albeit with a language that is more pastoral and non-definitive, the faith of the Church. A conciliar text – and even more so the entire corpus – by its nature needs to be interpreted within a harmonious continuity with the Tradition: this is its natural habitat. Faced with any ambiguous, imprecise, or problematic texts in which the subsequent theological debate – and even more the media debate – about how to interpret them has taken a heterodox turn, the constant practice is that it is the Magisterium’s role to clarify them.

And this is what has always happened, including after Vatican II. Brandmüller notes that, for example, the declaration Nostra Aetate may no longer be interpreted as if Dominus Iesus never existed. The same holds true for Unitatis Redintegratio, Dignitatis Humanae, the expressions “subsistit in,” “sister churches,” etc.
“This ‘hermeneutic of rupture’ is made both by those who see in Vatican II a departure from the authentic faith, thus an error or even a heresy, as much as by those who through such a rupture with the past wanted to dare taking a courageous departure towards new shores.” It seems to me that both currents have a common characteristic: that of skipping over almost sixty years of the Magisterium subsequent to Vatican II, which includes, among other things, a voluminous Catechism of the Catholic Church; whoever continues to say that the texts of the Council have broken with the Tradition does not take into account what was clarified later, and whoever would claim a progressive interpretation of these texts frees them from subsequent “restrictive” clarifications. “It would be a grave error,” explains Brandmüller, “not to take [the documents of the post-conciliar Magisterium] into account in the interpretation of the council for the present time and to act as if time stood still in 1965.”

Another error that is common to the two currents is that of dividing the fact of the Council, the res of its documents and their interpretation, to the point of radically separating them. The documents of Vatican II exist, with their glories and their flaws. But they are embedded within a tradition that both precedes and follows them. And this is their natural interpretative context. In other words, to recall the title of a book by Stefano Fontana a few years ago, the Council asks to be restored to the Church, freed from every type of ideology. It is the Church that produced these texts that is their adequate interpretative context, the Church that extends throughout all of history and is rooted in eternity.

The question of religious freedom was also highlighted in the time after the Council by several important theological studies, which clarified how that right does not concern the relationship between man and the truth, as if it were claiming the right to error, but rather a right to immunity from coercion by the State, a right to demand not being subjected to compulsion. It is a negative right (to demand to not undergo compulsion), a limit placed on the State in its relationship to the individual person in the religious sphere. The recognition of this right by the State does not enter into the merits of the content of the religious choice, but rather into the fact that it does not have competence in this sphere, unless certain religious choices would be harmful to the common good.

The question is certainly not closed. Precisely for this reason it is of fundamental importance to heed the Cardinal’s invitation to “go slowly [...] in the debate about Vatican II and its interpretation, which must in turn take place against the background of the situation that has changed over time. In this regard, the magisterium of the post-conciliar popes has made important contributions, which however has not been sufficiently taken into account, even though it should be noted precisely in the present debate,” recalling that “the difficulties in the interpretation of the conciliar texts do not derive only from their content. We should increasingly consider the way in which our discussions develop in this regard.”