Calling private property a 'secondary' right makes it susceptible to restrictions by oppressive powers. To say, on the other hand, that private property is a primary right, but that its use must be well regulated, leads us to discuss the proper roles of individuals, families and natural societies. On the other, requests to limit private property rights favour state and supranational powers, as is happening right now. Let us reflect on the language used by Francis at the United Nations Conference. 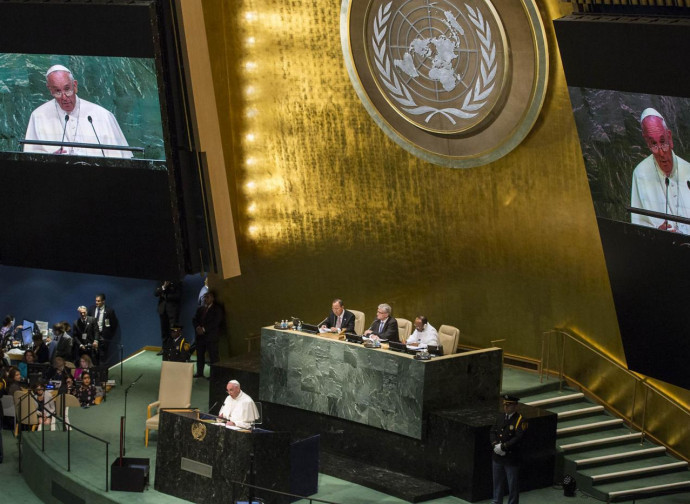 Pope Francis often states that the right to private property is not an absolute right and that it can be limited. He recently returned to the subject in a video message given to the United Nations International Labour Conference held last 17 June. Francis said: "Sometimes when we speak of private property, we forget that it is a secondary right, which depends on the primary right, that is, the universal destination of goods." This time too, his statements were accompanied by others like the "throw-away" culture  and the need to completely rethink our "economy that kills."  Those who listen to the pope's speeches are like led to link that his referring to private property as a "secondary" right as a one that can be infringed upon by virtue of the primary right. These same people might be swayed to oppose the "economy that kills" because they then find it acceptable to tamper with private property rights.

First of all, we should bear in mind  that no right is absolute, because all rights are legitimised, and therefore limited, by duties that precede them. Stating, therefore, that the right to private property is not an absolute right is stating the obvious.

To call the right to private property a 'secondary' right, as Francis did at the U.N, conference, is not obvious and can be a very dangerous thing to say. If a right is legitimised by one or more duties rooted in human nature and in the finalistic order of society, then it is primary. In fact, private property falls into this domain. Pope Leo XIII’s social encylical Rerum Novarum lays the foundation for this principle by defining private property rights as “natural”  based on the duties of work, of the family, and of the individual callings of intelligent and free persons. If a right is  indeed “natural”, then it is certainly primary and cannot be secondary. Obviously, primary does not mean absolute. This improper distinction between “primary” and  “absolute” is  found in Francis' language.

The two principles are then equally primary (though not absolute) and both result from divine creation. God has given us everything, He has also given mankind to itself. God has given us the earth but also the duty to work it, which gives us the right to possess what work legitimately allows us to acquire and set aside for our use: "God gave the earth to the whole human race for the sustenance of all its members, without excluding or favouring anyone. But the earth does not yield its fruits without a particular human response to God's gift, that is to say, without work." (Centesimus Annus, 31). This is where individual property originates. The fact that private property is not an absolute right does not derive from the fact that it is a secondary right, but from the distinction dating back to Leo XIII,  and later confirmed within the tradition of the Church's Magisterium, that is, between the possession and use of goods. Possession is a primary right, but its relationship with universal destination imposes a certain "social" use.

Calling private property a 'secondary' right opens it up to being restricted by oppressive powers. On the other hand, to say that it is a primary right in itself, but that its use must be well regulated, calls into question the roles and impact individuals, families and natural societies have. It is they who are the first subjects who must intervene and "socialise" the use of property, well before the state and any protagonists of a New World Order. Otherwise, requests to limit private property rights favour state and supranational powers, as is happening right now. Indeed, disturbing signs of a society without private property are coming from these very surpanational organisations. To say that private is a 'secondary right' can be a very negative way of helping us understanding its true role and meaning.