Burke: Strenghten your faith by going on pilgrimage

Going on a pilgrimage deepens our faith and that in the Holy Land is the mother of all pilgrimages: "Humbly placing your step where the Son of God put his, not only heightens awareness of the events of His life but above all the Mystery of His abiding presence on earth.” These are Cardinal Burke’s reflections at the end of a pilgrimage he led. 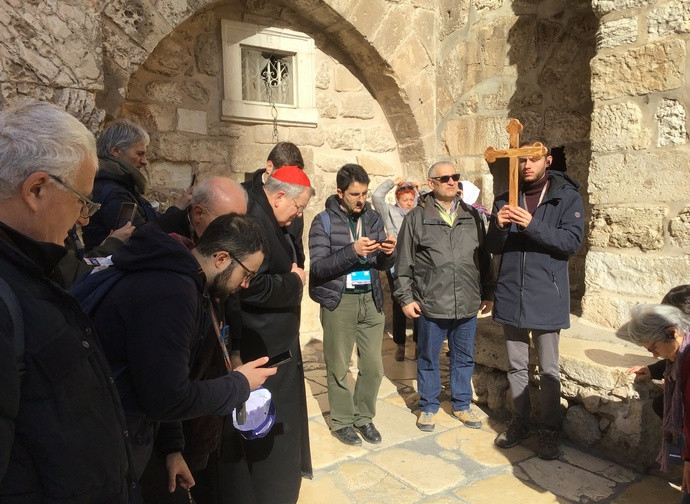 “Pilgrimages bring us closer to our faith and thus bring us true peace. Not going on pilgrimages means losing contact with our salvation.” Cardinal Raymond L. Burke’s talks to the Daily Compass at the end of a 8-day pilgrimage he led to the Holy Land. He shared his thoughts and some personal reflections on the importance of pilgrimages which became a significant part of the Catholic tradition in the 4th century, when Christians traveled to different places that were part of Jesus’ life or the tombs of martyrs and saints. Here are a few extracts from the conversation with him. 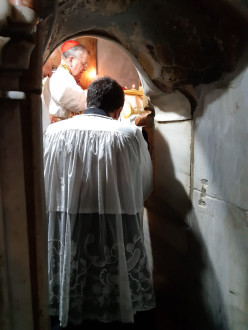 Why do many pilgrims define a pilgrimage to the Holy Land as a turning point?
The Holy Land is the mother of all pilgrimages, and pilgrimages are the most ancient form of devotion. Going on a pilgrimage is an experience of spiritual wonder. In the Holy Land, we find the foundation of our faith by visiting the places where the miracles took place and the places where the Lord carried out His public ministry, lived, died, rose from the dead, where the institution of the Sacraments took place. Humbly placing your step where the Son of God put his, not only heightens awareness of the events of His life but above all the Mystery of His abiding presence on earth. Our hearts yearn for that mystery and above all for the peace and certainty which comes from the fatigue of the search for God in the form of a pilgrimage.

What is the special role of a pilgrimage in this search for Christ?
I recall fondly the yearly pilgrimage in which I took part as a boy with my family, every summer in Wisconsin. A priest of my home diocese had created a shrine to Mary and the Passion of Our Lord. Going to the shrine on pilgrimage deepened my faith and increased my wonder at the mysteries of our faith and the sacraments. The sacred places of pilgrimages give us peace and strengthen our trust in God. We are following Jesus’ example, He went on pilgrimage to Jerusalem every year. We need to rediscover this ancient form of devotion that brings us closer to our faith and brings true peace. Not going on pilgrimages means losing contact with our salvation.

Yet tour operators lament the numbers of pilgrims visiting holy places has dropped
The fact that fewer people go on pilgrimages is a visible sign of the secularism that has invaded society and the Church. Jesus presented men and women with the truth, their relationship with Him. John the Baptist represents the resistance of truth to power. We need to follow his example. According to a worldly way of thinking, relationships are perceived exclusively in human terms for the purpose of building a just society. If we stop living our faith, it becomes just an idea, it is no longer a relationship with the living Lord. As a result, there is no attraction to go to holy places. Division and schism are signs of the need for the conversion inspired and fostered by pilgrimage.

Being a Christian means being a sign of contradiction as Christ was. Yet, this contradiction is often perceived as contradicting the unity of the Church and causing division. How do we preserve the unity of the Church while being a sign of contradiction?
This perception is the product of secularisation in the Church which is then seen as a political body divided in to camps. Saint Paul lamented the division in the church in Corinth when groups were identifying themselves with different religious leaders at the time, the community did not see itself as one church. You can only deal with division by giving testimony to the truth, by keeping yourself focused on living the truth of our faith and giving witness to it. Doing so, we will be accused of causing division, but we need to accept this suffering for Christ. Saint Paul, in the Letter to the Colossians, expressed his joy in suffering with and for Christ. Defending the faith is not being an enemy of the Church or the Pope. Our faith begins with our relationship with Christ and our obedience to Him. Every member of the Mystical Body of Christ, beginning with the Pope, must be obedient to Christ, the Head of the Body. We are all living members of the Body of Christ. We know that Christ, not our opinion, is the truth. We need to stop employing political ideas of the truth. If the Church is dedicated to building a society of human justice alone, then it has closed its soul to the justice and forgiveness of God.

We could call this moment in the Church a new hour of agony in the garden. How can we be more willing to carry the cross?
There is no human way to accept the cross. It is only through prayer, penance and fasting in the name of Christ. Christ called his disciples to keep watch and pray so as not to fall into temptation. Each person according to his or her vocation and particular gifts is called to walk with and in Christ until His return and His new reign begins. We know from experience in our family and work that sometimes a worldly spirit, not Christ’s, prevails. The church has always faced challenges, but we all have the responsibility to carry the cross to build the kingdom of god.

Still on the subject of Christ’s return, Don Bosco prophesied the future victory of Christ will be obtained by the Immaculate Heart of Mary and the Holy Eucharist. Mary and Christ together. Could you comment on this?
The great mystery of the Incarnation essentially involves the Divine Maternity of Mary. St. Paul says she was predestined to participate in the salvation through her maternity. Christ came as a man, but he remained divine, the Second Person of the Holy Trinity. God had to prepare the right tabernacle for the conception and birth of His only-begotten Son. Mary conceived without sin was chosen to be the tabernacle. She continues to be the channel by which the grace of Christ reaches our souls. Christ, dying on the Cross, gave us His Mother as our own Mother in the Church.