Among the discount proposals that are flooding the web recently, customers can also find a gruesome baby discount by BioTexCom, a Ukrainian centre that offers wombs for rent and artificial insemination. The marketing gimmick and promises of happiness, conceal a world of suffering and exploitation. Melanie's story: Ukraine costs less and offers more choice. 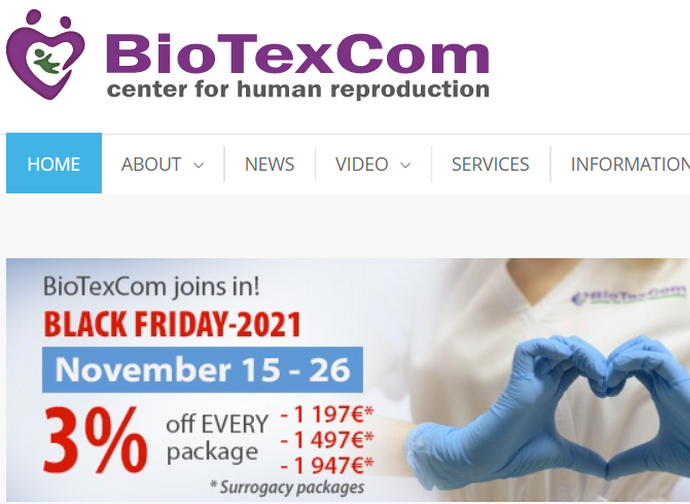 Black Friday sales began early this year sending the first flurry of bargain hunters rushing to their keyboards. Customer satisfaction, according to market research, depends not so much on what's been spent but on what's been saved. When the special deal, however, is no longer for new headphones or fluffy bed socks, but for discounted babies, it’s abhorrent. Even the most hardened feminist should be sickened at the idea that women's eggs and wombs are up for sale at a discount whether it’s Black Friday or not.

Yes, this is what’s on offer at the Ukrainian BioTexCom Center for Human Reproduction. It has joined in Black Friday with a very special sale of babies. From November 15 to November 26, (offer expires today) it’s offering a unique proposal for clients:  “-3% off EVERY package”. For an “All-inclusive VIP” surrogacy package customers will save 1,947€ (US$2,200) on a total price of 64,900€; whereas a “Perfect Chance” IVF package the discount is 447€ ($500) off the total price at 14.900€. “Hurry up to receive your discount”, and “Hurry up to make your dream of a baby come true”,  beckon the promotional slogans on the website!

BioTexCom is a popular choice for international surrogacy and its success is largely down to its marketing strategies. It is active on Facebook, Twitter and YouTube (in Romanian, English, German, Chinese, Japanese, French, Spanish, Bulgarian.) It sponsors sporting teams and its clients can even get a BioTexCom tattoo which obviously serves to advance the company’s advertising campaign. Its website offers a helpful graphic to explain the 17 steps needed to buy the perfect child, from making the original decision to ‘going home as a happy family’ for those who can afford the luxury.

But, what about the all the young women who are exploited and consumed so that the baby business can flourish? Nobody questions it’s their body, the problem is what life choices do they have and whether women should ever have to rent their wombs and sell their eggs. It’s hard to imagine how desperately they must need the money when you look at the three young attractive graduates all soap and water, smile innocently from the egg donors’ page as if carrying a baby for someone else for nine months is nothing more than a shopping spree.

Then, there’s the 'unmentioned' drama hidden behind the glossy, slick advertising on BioTexCom’s website as told by Melanie (a pseudonym) who already has a toddler and is now expecting twins through a surrogacy package with BioTexCom.
Melanie was not long married and ready to start a family when she discovered she had an aggressive type of breast cancer. Her doctors advised her to freeze her eggs before they were destroyed by the long bouts of chemotherapy which would become her Calvary for the next few years. “Hell on Earth” she called it, as she clawed her way back to health and the dream of becoming a mother.

Melanie describes her ordeal. “We started with IVF but it didn’t work because my eggs were no good” she says off the cuff. “After that, my husband and I wondered what to do and a friend’s doctor suggested surrogacy. She recommended a clinic in Spain, but when we looked into it, we didn’t like the package and it was very expensive.” This is when Melanie began to shop around for better deals and came across BioTexCom. “The difference between clinics is amazing” she tells me. “ I don’t understand why women go to Spain or America where you spend a fortune when you can get a baby for much less. Ukraine is so much cheaper and you have more choice over whose eggs you get and which womb they are planted in.” She explains what happened next, “I was given a choice of six young women so that the baby was more likely to look as if it was really mine and we had the choice of being at the birth and could stay with the baby in a separate room until discharge.” Asked why these girls choose to be surrogates, she told me, “it’s definitely financial, I think they pay their university fees with the money”.

Melanie also describes the terrible suffering of the women she encountered at the Kiev clinic from every continent. Some were well over 60 and still hoping to have a baby, some depressed after several attempts at failed IVF, some hoping to save their marriages with a baby, or totally alone because their husbands weren’t sufficiently motivated to take a few days off work and make the trip to the clinic. This is the real and desperate world of those seeking a baby at any cost.

It’s just a pity their stories bear no resemblance to the perfect world BioTexCom describes where everyone’s dreams come true: clients get the baby they want and the donors get their money. Whereas, BioTexCom claims that for them the, “ultimate reward” comes not from the lucrative business its running from selling eggs, wombs and babies, but from the many “postcards and gratitude words from grateful parents”  their “managers and doctors often receive”. In fact, it gives them so much satisfaction, they are offering a Black Friday discount so that even more women can have their dream baby. One wonders why only 3% off then and not more.

The answer probably comes from the fact, surrogacy has always been a transaction for the rich and BioTexCom’s miserly discount serves no more than to attract attention to themselves in a fiercely competitive market. Having already got their foot in the door, this is a ploy to weigh in on a growing industry, legal in many countries, which is already making billions. At the moment, India has the largest commercial surrogacy industry in the world, worth an estimated $6 billion. But the global trend towards low cost, which includes this sector, means the fertility market is becoming increasingly available to a wider range of the population, and it could soon change who holds the biggest quotas.

At the moment, the market is still dominated by the rich who have the financial clout to satisfy their every whim. An article in ‘People’ describes the plethora of famous people, like Kim Kardashian who is capable of having her own children, and Elton John who can’t because he’s homosexual, who have paid women to carry a child for them and in some cases more than one. No one doubts, they shower their surrogate children with love and affection, but serious questions need to be asked when the transaction for a human being isn’t that different to buying a luxury car or a big house.

There’s an on-going debate about violence against women, but rarely if ever, it includes surrogacy where women with very few choices are exploited by people with an abundance of options. Moreover, it’s really hard to believe, what we are often told, that these young women become surrogates because they want to bring infinite joy to a rich stranger by carrying a child for them for nine months, giving birth to it and handing it over to them as if the baby had been lent to them for an interim period.

One fact remains: some of the couples mentioned in the article by ‘People’ who thought they had reached ‘happy’ family status, eventually separated. Nothing is mentioned about the dramatic effects broken families have on the futures of all children not least those who discover they were born via surrogate perhaps at a discount on Black Friday. Once again, it proves that money buys what you want but it still doesn’t buy happiness and love; in some cases it's a guarantee for more misery.