"In Germany the entire Christian anthropology is on the brink. It is regrettable that St. John Paul II's  theology of the body of is hardly known in Germany. We also need a new language and a new profile for our ethical positions in order to guide people and save them from confusion." This is what Wolfgang Ipolt, the Bishop of Görlitz has to say. 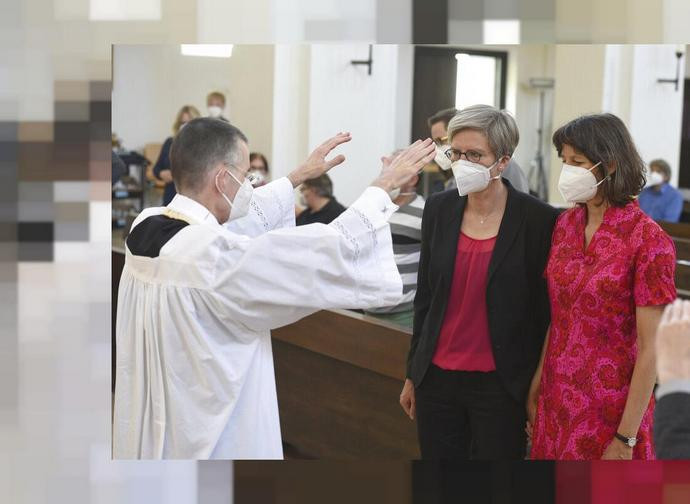 They wanted to make a noise, but only triggered deafening silence. Nearly a week after the day of collective blessings were also made available to homosexual couples, official reactions to the protest-initiative against the Congregation for the Doctrine of the Faith's Responsum are still lacking. The Forum of German Catholics has called for bishops to punish rebellious priests according to Forum spokesman, Hubert Gindest, who says that the absence of sanctions will lead the faithful to form the "opinion that the Congregation for the Doctrine of the Faith's provisions can be ignored and that everyone can make up their own minds on Catholic moral doctrine." There are also those, like the canonist Gero Weishaupt, while considering admissible the punishment of priests who have joined the #liebegewinnt campaign, who believe it is "inappropriate" because "the Church's penal code is characterised by the principle of clemency.".

In short, chaos appears to dominate the German Church, while grappling with the strongest winds of schism it has ever experienced. Leaders of the German Bishops' Conference themselves have used tones that seem more upset about the publication of the Responsum rather than to distance themselves from last Monday's collective blessings. The German bishops are not united. The Daily Compass spoke to the Bishop of Görlitz, Wolfgang Ipolt on the difficult situation facing the Church in Germany today.

Your Excellency, you were one of the German bishops who welcomed the Congregation for the Doctrine of the Faith's Responsum. Others criticised it. Did you expect this from your fellow bishops?
The Congregation for the Doctrine of the Faith's Responsum clarified a practical, liturgical and pastoral issue. In my opinion, however, a different kind [of response] should have been chosen, one which would certainly have been better received. The Responsum is a clarification given when celebrations of similar blessings have already been taking place in various places in Germany for quite some time. This is certainly the reason for the loud protests heard in some regions of our country. In addition, there are questions relating to the Church’s teachings on sexual morality that are directly touched upon, but certainly require further study.

What do you say to the many who nowadays are contesting the Responsum's content, claiming that the Church cannot go on blessing motorbikes and cars, while refusing to bless homosexual couples?
As the Church, we are first and foremost bound by the testimony of the Sacred Scripture and the ongoing teaching of Tradition. People who believe they are homosexual can, indeed, be blessed, but their homosexual relationships cannot be blessed. For example, homosexuals are always blessed when attending Mass. Here, however, it is a question of attempting to equate their union in some way with marriage, as has already happened in many Western societies through state legislation while seeking a solemn blessing. Such a committed desire for partnership is a sign that people do want to take responsibility for each another. I can respect that.
However, an official blessing as part of a liturgical rite would undoubtedly lead to confusion with [the sacrament  of] marriage in the Church. That is why, from my perspective, there cannot be an official ceremonial blessing for such couples.

Thousands of Catholic priests are clearly defying the Vatican by publicly blessing numerous same-sex couples. Should they be punished? Do you think this rebellion will cause confusion among believers?
The entire Christian anthropology is on the brink. Above all, I am speaking about Germany. In recent decades, the Church has not fully understood how to present and convey the priceless value and significance of its teachings on sexual morality. In particular, it is regrettable that St John Paul II's theology of the body is hardly known in Germany. Today, we also need new language and a new profile for our ethical positions in order to guide people and save them from this confusion.

Most of these protests took place in northwest Germany. Did blessings also take place in your Diocese of Görlitz?There were no protests in my diocese. Here Christians live in the diaspora and, as far as I know, there have been no homosexual Catholics who asked for blessings.

Are you afraid of a schism in the German Church?
I trust that the Holy Spirit will always accompany the Church and help us find a way out of certain aberrations and contradictions, so that we do not end up in division but more deeply [united] in the truth.

There is mention of a "synodal journey," but where is this actually leading to?
This is a good question that I cannot answer right away. For now, the answer to "where is it leading" is not yet clear. I hope that the synodal journey will allow Germany to more deeply understand we are not the centre of the world, but part of the universal Church. This is what Pope Francis meant when he reminded us of the "sensus ecclesiae" in his June 29, 2019 letter issued at the beginning of the synodal journey.