Biden has made too many inappropriate affirmations regarding Putin for them to be attributed exclusively to his lack of diplomacy: it seems their objective is to purposely irritate Moscow, distancing the moment of possible negotiations and therefore risking the acceleration of a potential conflict which threatens to involve Europe. Once again, the divergence of interests which separates the USA from Europe is emerging, together with the revelation of the mediocrity of the EU governing class, apparently willing to permit itself to be placed under outside management. 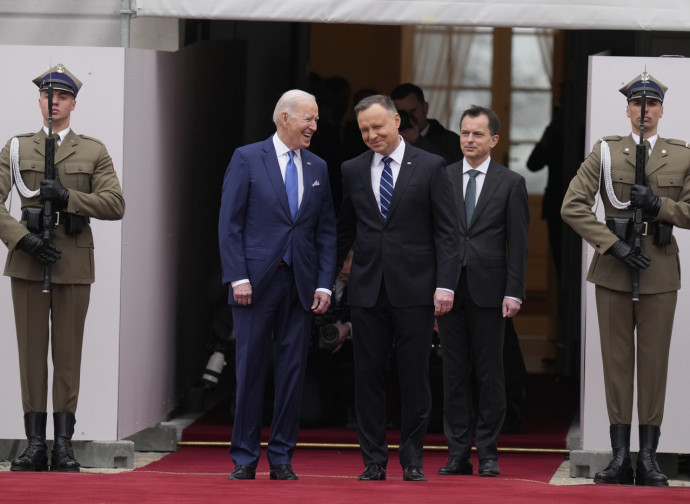 Over the past days, during the various NATO Summit and European Council meetings in Brussels, it has been the numerous faux-pas (or presumed faux-pas) of American President Joe Biden that have led to the threat to the establishment of a unity of intent between the USA and Europe with regards to the war in Ukraine, and the correct position to assume with Russia. “For the love of God, this man cannot remain in power”, Joe Biden said in Poland, just a few hours after having accused the Russian President of being a “butcher”.

It is possible that Biden was inspired by a certain Italian Minister who had defined Putin as “the most atrocious of animals”, but all things considered, Biden’s phrases have had much greater publicity, forcing many on both sides of the Atlantic to clarify their positions, and/or distance themselves from the White House. A member of the Biden administration specified that the President was not referring to the power of Putin in Russia, but rather to the power which Putin would like to exert over neighboring countries, and Secretary of State Anthony Blinken specified that Washington does not have a plan for any change of regime in Moscow. These inefficient rectifications attempting to excuse the statements in question cannot hide the glaring inadequacy of a President of the United States who speaks of his Russian counterpart as if he were a Hussein, Gheddafi or Assad, to be substituted or eliminated.

Citing former government officials and analysts, the Washington Post underlined the grave implications of Biden’s words, as they place doubt upon the USA’s capacity to impede escalation and contribute to the end of the war. Samuel Charap, a Russia expert at the Rand Corporation, claims that Biden’s declarations are awakening within Russia: “The perception of existing threats relative to American intentions. The Russians could be more inclined to respond in kind to hostile threats, even more so than at the present moment.”

On the other hand, Biden’s inappropriate declarations regarding Putin have been too excessive, both in number and in kind (over the past few weeks Biden has called Putin “an assassin”, “a war criminal”), to be considered attributable to Biden’s lack of diplomacy : inopportune but unintentional. It is impossible not to note that such declarations seem to have as their objective the intention of purposely irritating Moscow, distancing the commencement of concrete negotiations and therefore risking the acceleration of a potential conflict which threatens to involve Europe.

It would be a prolonged war serving Washington’s interests, which would bring about the rapid weakening and deterioration of Europe, the USA’s eternal economic and commercial rival, and the world’s greatest accumulation of wealth. Certain individuals are now speaking openly about a duel in the Administration, with the White House and Department of State on one hand, determined to provoke a Russian military response, and on the other hand the Pentagon, attempting to soften the bellicose tones, impeding the addition of combat planes, artillery and tanks to the long list of anti-air and anti-tank weaponry provided to Kiev troops.

It should be noted that the war in Ukraine has caused Biden’s popularity to fall even lower, with fewer than 40% of Americans registering approval of his administration, and over 55% of Americans fully disapproving. A recently published NBC News poll indicated that seven out of ten Americans have little faith in the President’s capacity to manage the conflict. And an even higher number -  eight in ten Americans – fear that the war will raise energy costs, and that the conflict may pose the risk of nuclear threats. This poll was taken between the 18th and the 22nd of March, prior to Biden’s European trip, and his recent, inappropriate declarations which have been the cause of countless arguments.

In Europe, the first to speak out against the rantings of Biden has been Emmanuel Macron, who stated he does not believe Putin is a butcher, and is apparently uncomfortable with the aggressive statements put forth publicly by Washington, every time it seems there may be an opportunity for genuine negotiations between the warring factions. “This is not the time for causing an escalation, either of words or of actions”, Macron warned, and seems to be oriented towards another encounter with Putin in order to reestablish the basis for an accord. “We are not attempting to change a regime. It would be up to the Russian citizens to decide whether they still want him or not”, Josep Borrell, high representative for EU Foreign Relations declared. “What we want is to impede the continuation of the aggression, and to stop Putin’s war against Ukraine”.

Even NATO’s most faithful ally, Great Britain, has distanced itself form Biden with statements from the Minister of Education Nadhim Zahawi, while the loquacious Boris Johnson has avoided any mention of the American president’s statements. Even the Turkish government, headed by Recep Tayyp Erdogan, had to give Washington a lesson in diplomacy, in an official communication from their Ministry of Foreign Affairs: “If everyone burns bridges with Russia, who will be left to negotiate at the end?”

This episode once again reveals the divergence of interests separating the USA from Europe, together with the revelation of the mediocrity of the EU governing class which, instead of undertaking initiatives over the past years to resolve the war in Ukraine (which began in 2014), is apparently willing to permit itself to be placed under outside management by the USA, whose first objective is to second its own strategic interests.

The presence of Biden at the European Council did not appear to be the courteous reception which a great Power concedes to a distinguished guest, but rather a homage to an entity which has travelled across the ocean to dictate the terms and conditions of our servitude. And the results, on a political, strategic, economic and energetic level, are visible to all.