Benedict's ascent to heaven leaves the earth more in the dark

Pope Emeritus, Benedict XVI, passed away today at 9:34 in the Mater Ecclesiae Monastery in the Vatican.
The light of faith, married to reason, shone and shines in Benedict's theological writings, in the clarity of his magisterial interventions. Referring to him made one sure of not being confused, but confirmed in the truths of faith and reason. In his magisterium all truths came together and found their proper place. He challenged the heart of modernity, to which the Church is not called to "adapt". Therefore Benedict does not represent the past but the future. 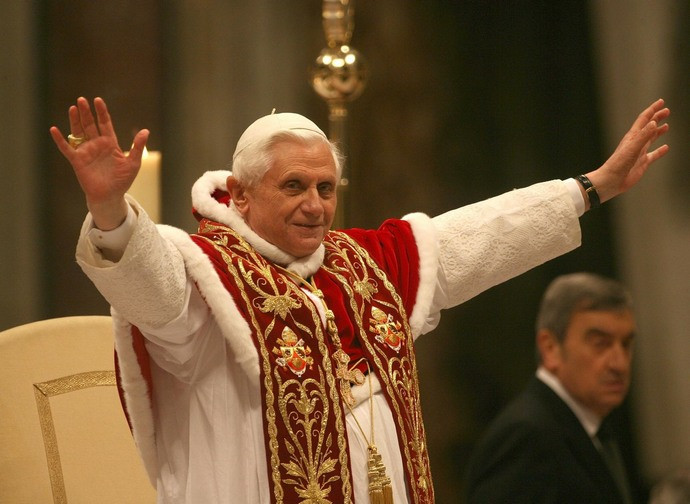 Joseph Ratzinger/Benedict XVI ascent to Heaven leaves the earth more in the dark. Faith is also light and knowledge which, in its marriage with reason, spreads clarity, dissolves darkness, overcomes anguishing doubts, gives joy to the intelligence, rescues us from the dictatorship of the moment and confers a freedom filled with truth. John Paul II had said that the Gospel phrase he loved most was: "The truth will set you free". I don't know if Benedict XVI ever answered a question on this point, but I think he would have agreed. The truth, which   thrives with charity (Veritas in caritate and Caritas in veritate) can be seen as the centre of his life, of his theological research, of the guide of the universal Church first to the Doctrine of the Faith and then of the Pontificate. A "luminous magisterium" as Cardinal Sodano rightly defined it.

The light of faith, married to reason, shone and shines in his theological writings, in the clarity of his magisterial interventions, in his speeches, some of which are now historical... but also in the calmness of his gestures, in the delicate respect he had for people, in the kindness of his attitudes, in his sober and intimate composure, so reassuring in expressing firmness and trust in Christ. There was no drooling, no feeding the doubt that corrodes and disheartens, no ambiguity, the how of his discourse always perfectly commensurates with the what. Referring to him made one sure of not being confused, but confirmed in the truths of faith and reason.

One could always approach him with a child’s trust, knowing that a father never would give a snake to be eaten. Benedict defended "sound doctrine" from the ever new winds of theological opinions, he maintained and re-proposed the need for the sacred even in a secularised world, he did not think that the "new" needed to be passively "updated", but if anything, to be faced with a prophetic immersion in the tradition, he did not despise dialogue, even with atheists, but at the same time did not renounce the faith's claim to emancipate into truth also reason.

When he argued with Habermas or Odifreddi he did not use reason alone, but "reason in faith", like St. Thomas, who was trained on the teachings of St. Bonaventure and Augustine. He did not cease to defend the role of metaphysics in theology and helped John Paul II write Fides et ratio, which by now the Church seems to no longer remember. He was of the idea that "receiving precedes doing" and that rights and freedoms were truthfully legitimised by something that precedes them and which is called the natural order on the level of reason and a revealed deposit on that of faith. He reaffirmed with intellectual and theological finesse the need to understand God as the ultimate end and, therefore, the insufficiency of  the secular order with regard to its own ends and its need for a salvation that cannot be derived from worldly pride. He in the relationship between the City of Man and the City of God he never reversed the value and priority of the two realities, made no concessions to naturalism and he thought that revealed faith liberated natural reason from gnosis.

In Benedict's magisterium all truths came together and found their proper place. Error was not understood as a dialectical push towards a higher synthesis. Not only the intellectual but also the simple believer enjoyed being in a universe of coherent meaning endowed with stability, with which to face the contradictions and negations of existence, continuing to consider them contradictions and negations and not new norms or new laws. With Benedict it was known that circumstances are not exceptions. For him, time was not the starting point for interpreting the apostolic faith, certainly in Jesus' Palestine tape recorders did not exist, but the transmission of the apostolic faith took place in the absolute certainty guaranteed by the Spirit, the historical-critical method is not rejected but the faith of tradition prevails over it and liberation theology is wrong in thinking that the Gospel is read starting from the situation, while it is the situation that is read in the light of the apostolic faith. Contemporary theologies have indicated the "theological place" in many existential and historical situations, but for Benedict the only theological place was the apostolic faith. With him every faithful Catholic felt  certain of being guided by the Church to adhere to the same truths of faith as the Apostles.

Benedict had made it clear to the Church where truth had originally been denied in the radical form of modernity. This had happened in the West of the great abjuration and of atheism chosen as the new religion. He therefore thought that in the West and not elsewhere there should be resistance and recovery. Here, where the flame risked going out for the lack of aliment,  there had to be the re-proposition of the whole truth. Here, where new ideologies of nothingness now permeated every institution, whether political or educational, and where reason spiralled back on itself, annulling itself and fuelling “consensual” but no less destructive totalitarianisms than those already experienced, the Church should not have "adapted", but remained itself to the end.

Benedict XVI does not represent the past but the future.