Benedict XVI: 'the purpose of the liturgy is God'

Benedict XVI's liturgical legacy expresses first and foremost the primacy of worship, conscious that authentic liturgical renewal does not come through instructions and regulations nor through misguided participation. Hence the commitment to a 'reform of the reform', starting with his own example in papal celebrations. 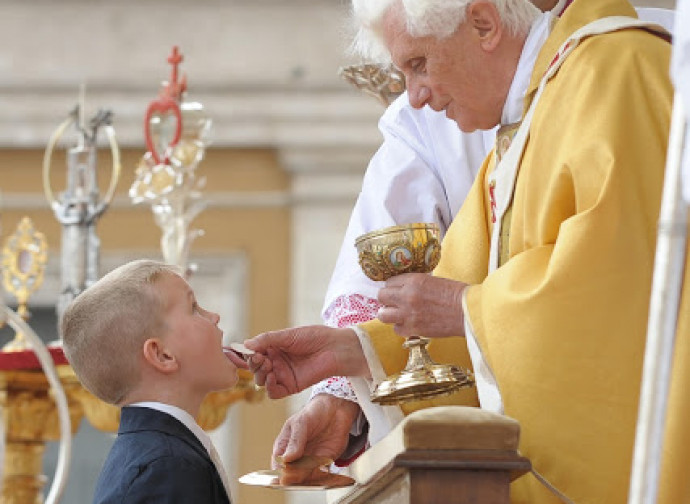 It was 4 December 1963, when Paul VI promulgated the first document of the Second Vatican Council: the Liturgical Constitution Sacrosanctum Concilium. A few days before his resignation, on 14 February 2013, in the year of the 50th anniversary of the Liturgical Constitution, Benedict XVI addressed the Roman clergy at the beginning of Lent as follows: “Some have made the criticism that the Council spoke of many things, but not of God. It did speak of God! And this was the first thing that it did, that substantial speaking of God and opening up all the people, the whole of God’s holy people, to the adoration of God, in the common celebration of the liturgy of the Body and Blood of Christ. In this sense, beyond the practical factors that discouraged starting immediately with controversial themes, it was, let us say, truly an act of Providence that at the beginning of the Council was the liturgy, God, adoration".

This was Pope Benedict's last teaching on the liturgical theme; the last of a rich and courageous doctrine, which the Oratorian Father Uwe Michael Lang, Professor of Church History at Mater Ecclesiae College of St Mary's University, Twickenham, and at Allen Hall Seminary in London, a great expert on liturgy and a profound connoisseur of Benedict XVI's thought, was able to outline in a commendable article for adoremus.org. The Liturgical Legacy of Pope Benedict XVI helps us to enter the year of the 60th anniversary of the conciliar document, in the light of the teaching of the great pontiff, who precisely in the field of the liturgy strongly wished to apply the criterion of the hermeneutics of reform in continuity, which he expressed in the now more than famous speech to the Roman Curia in 2005.

Ratzinger has always been sensitive to the liturgical theme, and he was the most authoritative person to publicly acknowledge that something had gone wrong in the application of the Conciliar Constitution. He wrote in L'Osservatore Romano on 4 March 2000: “In the post-Conciliar history, certainly the Constitution on the Liturgy was no longer understood from this fundamental primacy of worship, but rather as a recipe book on what we can do with the liturgy”. And he added, not without a pungent irony: "In the meantime, the creators of the liturgy seem to have lost sight of the fact, busy as they are in an ever more pressing way in reflecting on how the liturgy can be configured in an ever more attractive, communicative way, actively involving more and more people in it, that the liturgy is actually 'made' for God and not for themselves. However, the more we make it for ourselves, the less attractive it is, because everyone clearly feels that the essential is increasingly lost”.

Ratzinger/Benedict XVI was very clear - and Father Lang makes this clear - that Sacrosanctum Concilum has suffered a singular fate: it has literally been overshadowed by the liturgical reform, as if this were its faithful application, actually sacrificing its fundamental principles. Such as when, in n. 23, it is admonished: "innovations should not be introduced except when a true and ascertained usefulness for the Church requires it, and with the caveat that the new forms flow organically, in some way, from those already existing". It would suffice to recall some of these 'reforms', such as the suppression of the Septuagesima, the Four Tempora, or the recreating from scratch of the Offertory rites, to understand that something has gone wrong. If we then take a further step from the reformed rite to the manner in which it is actually celebrated, what can we say about the preservation of the Latin language (cf. SC 36, 54, 101), or the principal place that must be preserved for Gregorian chant (cf. SC 116)?

Benedict XVI called for a 'reform of the reform', precisely from the realisation that in the work of the Consilium for the application of the liturgical Constitution, something had gone decidedly wrong. And that something resulted in a painful rift, which he patiently tried to mend following three directions. Firstly, by example. Benedict XVI, calling Archbishop Guido Marini to his side, tried to put a liturgy worthy of the name back before the eyes of Latin Catholics: an altar recognisable as such, with six candelabra and a large cross in the middle; Gregorian chant and polyphony; Communion taken on the tongue and kneeling, the extensive use of Latin, the use of decorous vestments.

As Lang explains, “Benedict was convinced that authentic liturgical renewal does not come through instructions and regulations”. Many have judged this reticence of his to act on the juridical level as a weakness or 'as a missed opportunity'. But Traditionis Custodes stands as witness to the fragility of the normative path, in the current context of total misunderstanding of the liturgy within the Church, even at its 'centre'. What he instead offered during his pontificate touched the liturgical sensibilities of much of the young clergy and faithful, and took root.

His teaching has taken equally deep root. And this is the second direction. Benedict XVI has rooted the ritual details in their inalienable core: the liturgy as a gift from God, to be received and cherished, not invented and manipulated. And then the liturgy as a gift to God: it is He who is the purpose of the liturgy; it is the adoration of the Holy Trinity that is the purpose of the Church's liturgical action and its existence. During his visit to the Abbey of Heiligenkreuz, he had extolled that "prayer without a specific purpose, which is meant to be pure divine service", offered to God for the sole reason that "He is worthy ‘to receive glory, honour and power’ (Rev 4:11), because he has created the world in a wonderful way and in an even more wonderful way has renewed it". A misunderstanding of participation has generated asphyxiating ‘liturgies’, full of words and human initiatives, which have extinguished the essential vocation of homo adorans.

Hence the realisation that the Ancient Rite could have blown oxygen into the Church's sick lungs: third direction. The controversial formulation of the two forms of the single Roman Rite was not intended to be a point of arrival, but a starting point; it had a very specific reason: to contribute to that "reform of the reform" so necessary to recover the primacy of God in the liturgy and in the Church, and to mend the ecclesiological tear in the liturgical reform. Lang also highlights this aspect well; at stake, for Ratzinger - one will never cease to repeat it - was the identity of the Church, the preservation of the "internal continuity with its past", as he had said to Seewald.

Ratzinger's legacy has given birth to a new generation of scholars, of priests, of faithful, who have made his teachings deeply their own and embraced with determination and awareness the path he opened up. And people cannot be erased with a motu proprio. Benedict XVI has gone so deep that, rooted in his teaching, there is no need to fear either aridity or storm: et erit tamquam lignum, quod plantatum est secus decursus aquarum, quod fructum suum dabit in tempore suo - He will be like a tree planted along streams of water which will bear fruit in its own time (Ps 1:3).