"Benedict XVI Doctor of the Church: he fought for the faith of simple people"

Will Benedict XVI become a saint soon? "The Pope will decide, I think he has been a doctor of the Church with his magisterium. He always fought for the faith of simple people. The centrality of the question of God and Christocentrism are the two strong points of his theology". Cardinal Koch was interviewed by the Daily Compass. Ratzinger wanted him at all costs in the Vatican with him and he became one of his most trusted collaborators: "I told him that I did not want to leave my diocese, he answered: ‘I understand you, but come’". 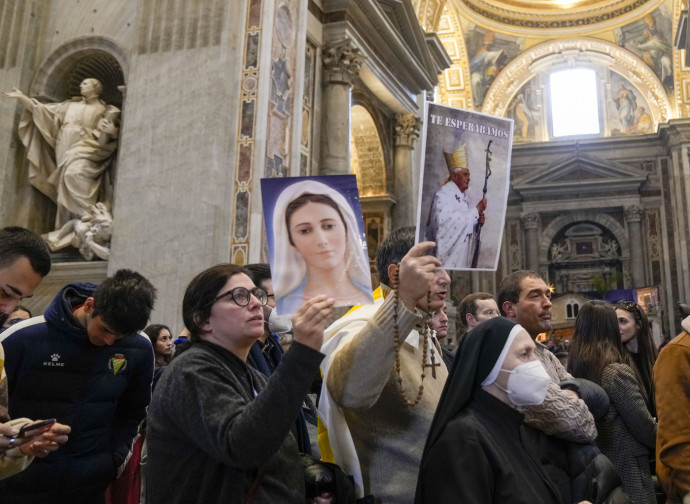 When the new Schülerkreis was formed of theologians who had not studied with Professor Joseph Ratzinger, but who had deepened his extensive work independently, Benedict XVI wanted Cardinal Kurt Koch to be their mentor. The Swiss prelate could count on the full confidence of the recently deceased Pope Emeritus, whose funeral was held in St Peter's this morning. He considered him to be the most reliable in presenting the correct interpretation of the Second Vatican Council and on liturgical reform. The Prefect of the Dicastery for the Promotion of Christian Unity, undoubtedly one of the members of the Sacred College closest to Ratzinger, received the Daily Compass in his study in Via della Conciliazione for an interview on the man who was his teacher.

Your Eminence, a personal memory of Benedict XVI?
My first acquaintance with him was through books. At the beginning of my studies, in fact, I read all of Professor Joseph Ratzinger's books and in particular "Introduction to Christianity". Then, as bishop of Basel, I had contacts when he was prefect of the Congregation for the Doctrine of the Faith. In 2010, when he was already Pope, he called me to work in Rome. And this meeting was very interesting for me.

Could you tell us about the meeting?
He had expressed his desire to have me in the Curia. I then replied that after fifteen years as a bishop it was not easy to leave my diocese. His response was this: 'Yes, I understand you, but fifteen years is enough. So come”.

Did he explain why he wanted you to lead the Pontifical Council for the Promotion of Christian Unity?
Yes. He told me that after the mandate of Cardinal Walter Kasper he again wanted a bishop who knew the ecclesial communities born of the Reformation not only from books but also from personal experience. This motivation made me realise that ecumenism was very close to Benedict XVI's heart. As president of the Pontifical Council I had a close collaboration with him and every audience was wonderful because he was very interested in the progression of ecumenism. Then, when he was Pope Emeritus, I had the joy of meeting him a few times and it was always enriching for me.

After his resignation, did you continue to be interested in his work for the promotion of Christian unity?
Mainly we always talked about the work of the pupil groups because he had wanted me as a mentor. But clearly he was also interested in the rest and his questions were: “How is the relationship with Constantinople? How is it going with Moscow? How is it going with the Lutheran churches?". He was always very interested, yes.

In a text you wrote on the occasion of the 90th birthday of the Pope Emeritus, you pointed out the coincidence of his birth occurring on Holy Saturday. His death, on the other hand, occurred during the Octave of Christmas. What reading do you give to this temporal circumstance?
Yes, it occurred precisely during the Christmas season that was very close to Benedict XVI's heart. But I think there is another fact to highlight: his election to the papal throne took place on the same day as that of Leo IX, while he died on the same day as Pope Sylvester I. Holy Saturday was very important for him because this day indicates the situation of every Christian: we are on our way to Easter but we do not yet have the experience of Easter. And today Benedict XVI can celebrate Easter, the Resurrection, and the encounter with his Master.

What do we find in the thought and magisterium of Joseph Ratzinger-Benedict XVI on eternal life?
The goal of the Christian life is eternal life. Professor Joseph Ratzinger said that his most studied book was 'Eschatology: Death and Eternal Life'. While the second encyclical he wrote as pope was on hope. Christian hope is the hope of the Resurrection. This is the goal for every Christian: to be converted in earthly life in order to attain eternal life.

There are those who call for his immediate canonisation. How did Benedict XVI see the saints and what place did he give them in the life of the Church?
He was convinced that the true reformers of the Church were always the saints because holiness is the goal of Christian life. There is a beautiful homily in which Pope Benedict says that holiness is not the exclusive property of a few but a vocation for all because there are so many flowers in God's garden. He compared the amazement provoked by the vision of a garden with a variety of flowers to the amazement that seizes us before the communion of saints with a plurality of forms of holiness. The communion of saints was such an important theme for him that he mentioned it in his homily for the Mass at the beginning of his Petrine ministry. But equally important was the communion of mankind: his priority, in fact, is to reflect on the faith of the Church community, not on theology.

In this regard, why do we still hear some people in the comments these days describing him as a pastor incapable of speaking to the simple faithful, even though he always conceived of himself and the role of the bishop as that of an advocate of the faith of the People of God?
He always fought for the faith of simple people. Theology is secondary, faith comes first. Theology, he maintained, must be oriented by faith, and not faith oriented by theology. It cannot be said at all that he was distant from the people. He did not privilege the relationship with the masses but that with the individual. In fact, he always paid great attention to the people he spoke to.

Do his last words, 'Jesus, I love you', represent the core of his theological spirituality?
At the centre of his theology is the question of God, but not just any God, but a God who wants to have contact with the world, who wants to have relations with mankind, who loves mankind, and who revealed Himself in salvation history first in Israel and then especially in Jesus Christ. In Jesus Christ, God showed His face. I am convinced that Pope Benedict wanted to write his book on Jesus of Nazareth, taking time and energy from his pontificate, to make it his legacy. The centrality of the question of God and Christocentrism are the two strong points of his theology. And those last words, 'Jesus I love you', are the perfect conclusion to Benedict XVI's entire life and theology.

Is it legitimate to expect that we will see him ‘saint now'?
Firstly, it is God who is the judge of who is a saint, so I must leave the judgement to Him. Secondly, it is the Pope who decides. I think that Benedict XVI has been a great teacher, a doctor of the Church with his theology and his magisterium, and this is what matters most to me. But we are all called to be saints.