Ratzinger's responses in Seewald's book, "Benedikt XVI: Ein Leben" tell us much more of the retired pope’s thinking than what has been anticipated. The power of the Antichrist is demonstrated not only by legalized abortion and gay unions, but also by a "world dictatorship of apparently humanistic ideologies" which excludes the Christian faithful from social acceptance. All this is tied to his renunciation of the papacy and his title of "Pope emeritus" with which Benedict XVI intended to strengthen the spiritual power of the Church, which is based on prayer. 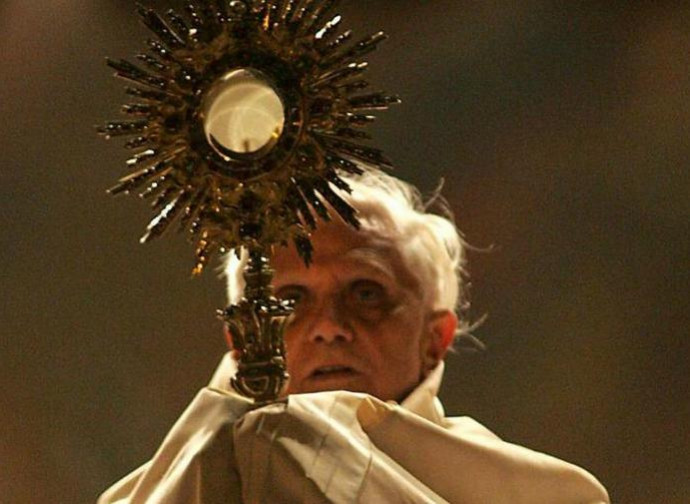 The words of Benedict XVI, leaked from the newly written book by Peter Seewald Benedikt XVI: Ein Leben, have garnered much attention. Abortion and homosexual unions are signs of the Antichrist. This is the essence of what has surfaced so far regarding Ratzinger's immediately denounced anti-modern views to the delight of some and yet disdain of others.

However, in Benedict XVI's responses reported toward the end of Seewald’s book, there is more interesting content. There, we find a profound reading of our present day and age. We read about a (perhaps final) clarification of Benedict’s "resignation,” the role of the pope emeritus, and revelation of the Church’s deepest reality. Let us address these one by one.

The book is based on 20 questions that Seewald asked the pope emeritus in the fall of 2018. Ratzinger had politely answered him. Yet, in a letter dated 12 November, Benedict had also specified, "what you ask me certainly delves into the Church’s current situation "and that his answers to Seewald’s questions "would inevitably lead to me meddling in the role of the current pope. Anything that goes in this direction, I must and want to avoid.”

It is important to bear in mind this context: Benedict XVI’s unpublished statements dive very deeply into understanding what the Church is experiencing at this hour of her history and that, subsequently, it was decided they be published despite running the risk of being understood as inappropriately invasive. Moreover, precisely as we read in his responses, Ratzinger says, "the claim that I regularly get involved in public debate is a malicious distortion of reality,"

The pope emeritus sums up our current situation as a "crisis of Christian existence" derived directly from "a crisis of faith." It is part and parcel of an ongoing apostasy that threatens the Christian presence in the world and merits deep reflection.

The real battle is not related to problems within Roman Curia. It is not a sort of Vatileaks that threatens the papacy. As Benedict writes: "I must say that the range of things which a pope can fear is considered too limited."  Instead, the actual issue is that of the Antichrist, a world dictatorship that will cause faithful Christians to be excluded from society: "The real threat to the Church and, therefore, to the Petrine ministry [is found] in a worldwide dictatorship of apparently humanistic ideologies, the contradiction of which leads to her exclusion from basic acceptance in society." It is in this broader context that the pope emeritus refers to abortion, homosexual unions, and the laboratory-based production of human life as signs of this humanistic tyranny. Benedict says, “Modern society is formulating an anti-Christian creed which, if opposed, we are punished with social excommunication. Our fears in the face of the Antichrist’s spiritual powers is, therefore, natural; we need the help of prayers from entire dioceses and even the global Church to overcome them."

These providential words shine light on our current crisis: the suspension of public Masses together with Church’s own submission to pseudo-health directives dictated by public experts is already a very clear indication of what is and will be the Church’s place in the world amid a widely proclaimed new humanism.

We are traversing, therefore, clearly anti-Christian times. We must fight against the Princes and Powers, “against the rulers, against the authorities, against the powers of this dark world and against the spiritual forces of evil in the heavenly realms.” (Eph 6:12). It is a spiritual battle to be fought principally with prayer.

Benedict believed he faced the Antichrist during his pontificate and, even now, is doing so in his life as the pope emeritus. Entering into this perspective, we are better able to understand the profound reasons behind his decision to abdicate and his "obstinacy" in retaining his title of pope emeritus, a recurring and dominant thread sewn into Seewald’s questions.

It wasn’t corruption inside the Roman Curia or some other threat from within that lead him to step down in 2013. Benedict said he had made a final decision in his heart back in August 2012 when taking some time off to reflect in Castel Gandolfo.

Seewald then tries to understand more fully the significance of Benedict’s resignation, proposing a theory put forth by the philosopher, Giorgio Agamben. According to Agamben, Benedict’s renunciation of the Chair of Peter was a move to strengthen the Church’s spiritual power. Moreover, in some way it anticipated, as it were, a separation between Jerusalem and Babylon, coexisting in the Church and in the world. Here Ratzinger "confessed, and did not deny, but confessed," (cf. Jn 1:20). The pope emeritus clearly clings to his beloved St. Augustine to remind himself that some are only apparently part of the Church while others, without knowing it, perfectly belong to her and that "until the end of time the Church evolves as a pilgrim among persecutions of the world and the consolations of God."(De Civitate Dei XVIII, 51: 2) Then Benedict comments on the words of the great Bishop of Hippo: "There are times when God’s victory over the powers of evil is consoling and others in which the power of evil darkens everything."

It seems that we are in the latter situation, which must not, however, lead us to forget that always "from within the Church, amid the tribulations of humanity and the [evil] power that causes confusion, we may recognize God’s silent power of goodness. " It was because of this thick veil of darkness and because of the rise of the Antichrist that Benedict chose to leave his "active" ministry and, at the same time, to maintain his title of pope emeritus.

Ratzinger reviewed the debate which, at the time of Vatican II, led to the legal definition of the "emeritus bishop", a solution proposed by Simon Konrad Landersdorfer, the Bishop of Passau. “Emeritus means that a bishop is no longer an active holder of the episcopal see, even though he still has a particular relationship to his former see. Therefore, on the one hand, it was essential to take into account the need to define his office in relation to a real diocese, without however making it seem there was a second bishop of the diocese. The word "emeritus" meant that he had fully surrendered his office, but his spiritual connection to the see he had up until that point is now also a recognized legal title." The spiritual bond, from the point of view of faith, is not something ancillary, like  a consolation prize to make you feel useful. On the contrary, the essence of the spiritual assignment "is to serve his diocese from within, on the side of the Lord, in being prayerful with and for [his diocese]".

But is it possible to apply the same reasoning to the pope? Benedict answered that “it is not clear why this legal title should not be applicable to the Bishop of Rome. In this formula we have both things: no full concrete legal power, but a spiritual role that, even if unseen, is  nevertheless retained" because this form of "spiritual union cannot be removed in any way." This is the "revolution" Ratzinger wanted upon his decision to resign: the spiritual strength to be thought of as something essential for the Church, as its most profound reality. What’s more, as such, it is even legally recognized.

In the face of constant, useless and harmful attempts to want to reform the Church by changing the structure of the Curia and inventing "new" pastoral initiatives, and so forth, Benedict XVI has advanced the primacy of the Church’s spiritual dimension through the legal recognition of his title as pope emeritus. His decision to resign was a radical act to push Christians to understand that prayer is, indeed, substantial. For Benedict, this spiritual dimension is a priority and it is more concrete than any mere physical action. This is so, since it means acting "interiorly on the side of the Lord.”

Agamben had hit the nail on the head. It is mainly at this level that the great battle of our own day must be waged.

This article was written in collaboration with Katharina Stolz