Antonio Barluzzi, who  passed away sixty years ago today, was the mind and hand behind some of the most renowned churches constructed by the custodian Franciscans in the Holy Land. During the course of forty years lasting until 1958, his designs and plans became more than a dozen churches built in the Holy Sites, and these included the ones of the Transfiguration, the Flagellation, the Beatitudes, and the Basilica of All Nations. 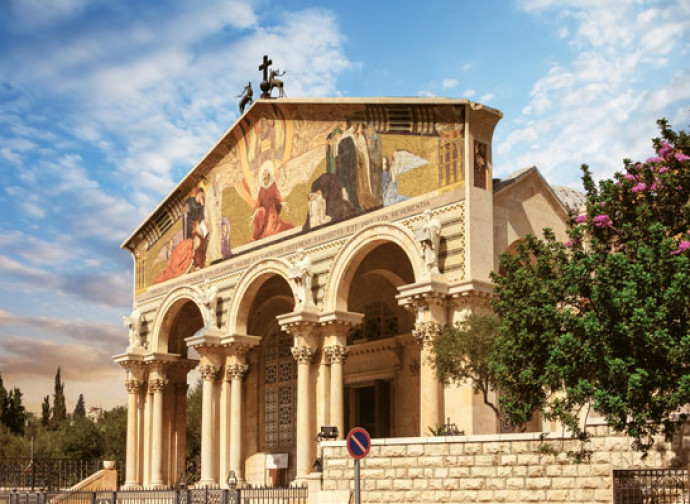 Architect Antonio Barluzzi, the mind and hand behind the most renowned churches built during the last century by the custodian Franciscans at the Holy Sites, passed away on 14 December 1960 in the Delegation of the Holy Land, not far from St. John Lateran in Rome. Fr. Virgilio Corbo, the archaeologist well known for the excavations at Capernaun, recalled how Antonio Barluzzi considered his work as an architect in the Holy Land to be much like a mission entrusted to him by heaven above. He dedicated himself to that mission with the heart and soul of an artist, exploring the mysteries of the redemption in the quest for that inspiration whereby architecture could express the sense of mystery in an immediate way.

Upon his arrival in the Holy Land in 1917, the task given to him was to build the Basilica of the Transfiguration on Mount Tabor in Galilee, and he worked on it from 1919 to 1924. This holy place of worship evoked Roman-Syriac architecture. Standing out on the façade is an elaborately sculptured arch supported by two towers, thereby forming the narthex, with the skies above as a vault and a solemn portal as a backdrop. These two towers connect the central part of the basilica with the two preexisting chapels of Moses and Eliah. The basilica has three naves with massive pillars and robust arches, while the ceiling with trusses towers over the windows interspersed by columns. A twelve step stairway leads down to the crypt, where preserved is the peak of the sacred mount (visible under crystal panels), the holy place where the Lord was transfigured and  engaged in conservation with Moses and Eliah while Peter, James and John looked on in a state of deep rapture. In the Lord’s mind, this event was to prepare the disciples for the ‘scandal’ of the Passion, and is narrated in the three synoptic Gospels, as well as in Peter’s second epistle. It is laudably depicted in the mosaic of the absal domed vault looming over the raised presbytery accessible with staircases in the lateral naves.

In 1929, “God’s architect” was in Jerusalem working on the reconstruction of the chapel of the Flagellation on the grounds of the Antonia Fortress where, according to tradition, Pilate  put Jesus on trial and the ensuing ignominious torture took place; this holy place is enshrouded with a dim light of sadness and prompts meditation of that mystery.  In 1937 Barluzzi moved on to the next task assigned to him: restoration work and the addition of mosaics in the chapel of the crucifixion on Calvary, ministered to by the Franciscans, inside the Basilica of the Holy Sepulcher. During that same year he drew up the plans for the commemorative sanctuary of the Beatitudes (see photo below) facing the Sea of Galilee. In 1939 he worked on the reconstruction of the sanctuary of the Visitation of Mary to Elizabeth with the crypt in Ain Karem, which is now a southern suburb of Jerusalem.

He was in Bethlehem in 1948-1949 to restore the medieval cloister built on the ancient monastery where St. Jerome had lived; it is just across from the Church of Santa Caterina, adjacent to the Basilica of the Nativity; he did this work by recycling bits and pieces of old capitals and columns.  He was in Bethany from 1952 to 1953, where he built the church of St. Lazarus on the traces of the walls of churches erected in the VI century, as well as the church in the village of Beit-Sahur near Bethlehem, known as the shepherds’ field, and the sanctuary of the Gloria in excelsis Deo.

In 1954, on the other side of the Mount of Olives, our architect began restoration works on  the ‘castle’ of Bethphage, the point of departure for Jesus’ entrance  to Jerusalem; at the same time he erected the chapel  of Dominus flevit on VII century Byzantine ruins halfway up the Mount of Olives to commemorate the tears shed by the Lord over the Holy City. Which pilgrim will ever forget the vision of eastern Jerusalem from this panoramic observation point? Looking down on the Esplanade of the Temple, occupied today by the mosques of Omar and Al-Aqsa, it is just natural to meditate on the prophetic words of Jesus about Jerusalem: you did not recognize the time of your visit, and hence the way of peace has been hidden from you.

Nonetheless, it was with the reconstruction of the “Basilica of All Nations” (so called because it was constructed with funding from the Catholic nations) or the sanctuary of the Agony begun in 1954 as well, that this architect-mystic reached the summit of his art, his masterpiece. An elaborate portico with groups of columns supports the tympanum with the dominant mosaic of Christ, who consecrates all human sufferings “with loud cries and tears. . .”  The church itself is a large open hall interrupted only by six monolithic columns supporting 12 uniform rib vaults that loom from on high as if prostrated before the Rock of the Agony at the very center of the presbytery, while externally they become small domes evoking the Arab surroundings. The windows of violet hued alabaster panels let in dim light very conducive to recollection. The pavement recalls the floor plan of the “elegant church” constructed by order of Theodosius (379-393) and described by the pilgrim Egeria.

Following a heart attack, Antonio Barluzzi returned to his birthplace, Rome, in 1958 and drew up designs for the new Basilica of the Annunciation in Nazareth, but preference was accorded to the Milanese architect Giovanni Muzio, who completed the work in 1969. Antonio Barluzzi had died nine years before that, after having rebuilt a dozen churches or so on Holy Sites over forty years of work, but not at Nazareth. Yes indeed, the most important Holy Sites are Nazareth, Bethlehem and Jerusalem. The last two, however, date back in both layout and development. to Constantine and Justinian respectively, and to the Crusades, but the Franciscans are in a sort of co-administration arrangement with the Orthodox. In Nazareth instead, they were the sole proprietors of the site with the ruins. After having paid an enormous amount of ransom money to the Druze emir Fakhr ad-Din, they had erected a small church there in 1730, made it larger in 1871, and they demolished it in 1955 to make room for the present large basilica belonging to Catholics alone.

Antonio Barluzzi knew how to translate Christian mysteries into art. This man of faith truly created “sacred art”. An architect-mystic, he is the Gaudí of the Holy Land.