Another Easter of restrictions for Masses in Europe

It will be another Holy Week with strictures placed on worship. The Vatican Easter Vigil Mass will take place earlier at 7.30 pm. In Germany, protesting bishops are pushing Merkel to reverse her government’s measures. Meanwhile, in Ireland,  threats are mounting to arrest 'disobedient' priests and in Belgium a 15-person limit remains in effect  for all religious services other than funerals. COMECE bishops denounced using Covid as a pretext to restrict religious freedom. 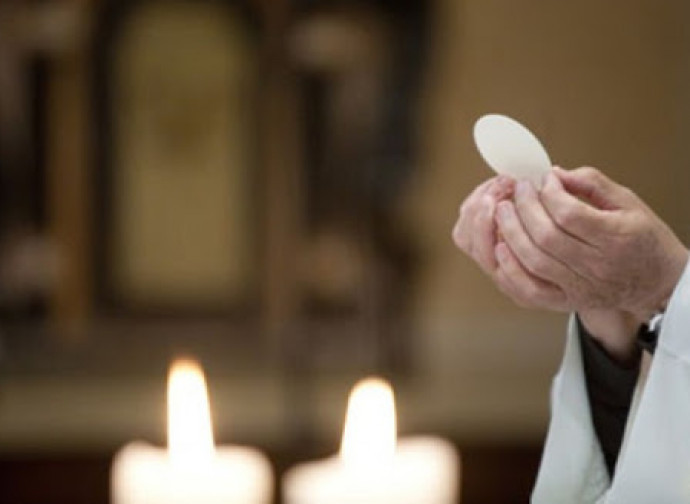 COMECE episcopal delegates (see here and here) told European Commission Vice president, Margaritis Schinas, in very clear terms: "Religious liberty and freedom of worship are restricted and threatened in European countries with the excuse of Covid-19". Ireland's case is particulary striking, where priests face fines and threats of arrest for 'disobeying' government regulations. In Germany, on the other hand, Merkel has reversed Easter restrictions following protests by bishops and other Christian/social allies.

The German government's prior decision (on 22 March) to impose a strict 1-5 April lockdown included requesting churches to celebrate all Holy Week services online. This ban on religious celebrations triggered protests from Germany's Catholic bishops, so much so that the German Bishops' Conference President, Bishop Georg Bätzing, tweeted he was shocked by the decision: "Easter is the most important feast for us... At Christmas, we showed how we can celebrate Mass safely. We do not want to renounce mass at Easter. We will bring the matter up in talks with local state governments.” The very next day on 23 March their complaints became more pronounced. The Bishop of Augsburg (Bavaria), Bertram Meier, expressed loud criticism: "Like before at Christmas, and now for Easter, the messages are similar. Shortly before the holidays, the churches have been asked to dispense with in-person services. But the Church is not a virtual organisation, she a living community.” It was not clear why churches in particular (but not grocery stores, open on Holy Saturday, nor airports with vacationers leaving for the Balearic Islands) should remain closed at Easter. Criticism aimed at Angela Merkel also poured in from Interior Minister Horst Seehofer (CSU), who in an interview blasted her decision: "I was astonished that parties with a C (Christian) in their name, of all things, would suggest that churches should refrain from holding services at Easter".

On Wednesday, 24 March, feeling overwhelmed by the amount of criticism she received, Merkel made a U-turn. She was first seen in a video conference with state governors, then in a public press conference and finally when taking questions in the Bundestag. She accepted responsibility for the mistake and withdrew the measures announced just 48 hours earlier. Merkel said the Easter lockdown was decided “with the best of intentions, but... it was a mistake. A mistake should be called a mistake and, above all, it should be corrected, preferably in good time." Kudos to Germany's chancellor for correcting herself in a timely fashion, but nevertheless the clash did happen and will have consequences.

In Italy, Mario Draghi has decreed a closure for Easter and on 3, 4 and 5 April the whole country will be declared a 'red zone' so as to impose greater restrictions during the country’s public holidays. The Vatican has again cancelled the Stations of the Cross procession that traditionally takes place around the Colosseum and rescheduled St. Peter’s Easter Vigil Mass for an earlier start at 7.30 p.m. (calling it a vigil really stretches its true meaning). Yet. compared to last year, celebrations in Italy are at least partially free to take place.

In Belgium, new decree that came into force on 8 March allows up to 50 people to attend funerals and  a maximum of 15 for other celebrations (excluding children under 12 ministers, organists). However, there are already the usual groups of "experts" who are calling for even more restrictive measures and total bans on religious services.

As already mentioned, the battle over Holy Easter in Ireland remains a very tense one, In Ireland, from the beginning of December there has been a ban in place until 5 April regarding virtually any public celebrations with faithful (except funerals with up to 10 people), while churches remain open for personal prayer. "No Christmas, no Easter" in what used to be one of the most Catholic countries in Europe. After extending government's strict lockdown measures, Irish bishops had already asked on 9 March to ease restrictions and allow faithful to safely participate in Easter Masses.

The Irish government turned a deaf ear. Nevertheless, two recent events might bring welcome change. Firstly, Fr. Hughes on 19 March. the Solemnity of St. Joseph,  celebrated Mass with the doors open and allowed the faithful to enter the church while subsequently being fined €500 by police. Officers burst into the church during Mass saying that the fine would be Hughe's last warning before being sent to jail. The incident made headlines, but Father Hughes is adamant, stating he will continue celebrating Mass with open doors and that, he won't pay the fine. He said he will post Mass times on Facebook, even if it means imprisonment. The second incident occurred on 23 March when Justice Charles Meenan gave the government "two weeks to clarify whether, in fact, there is a law against Masses celebrated in public". Last December, it was Catholic businessman Declan Ganley, in the midst of the controversy over bans on Christmas Masses, who filed a complaint against the government in the Irish courts. Recently, a report by the Irish Commission for Human Rights and Equality, made up of constitutional law experts, stated that the government's bans had no legal basis.

For the past year, total lockdowns have been imposed every time crucial Christian holidays approach. But when the faithful and the churches fight back, religious freedom is usually respected. These are not mere coincidences, but facts that must be taken into account.

One final question: who will have to answer for the moral damage caused by bans and limits to religious freedom, that is, for 5he suffering imposed on the real lives of millions of believers? And what sort of 'relief' will Brussels and the EU countries be able to provide?