Allusions, ambiguity, and poetry: By how you write, I can tell you what your Magisterium is

In order to give one’s personal assent in matters of faith and morals, the believer must have a clear understanding of exactly what it is he is assenting to. All the rest is just literature. Just like Amoris Laetitia, Pope Francis’ apostolic exhortation Querida Amazonia uses a style of language that emphasises the use of images, the insertion of poetry, environmental slogans, expressions loaded with social-justice ideology, and drastic historical judgments. His magisterial documents consider it useless to teach the truth with precision, believing instead that the magisterium should inspire reflections, comparisons and the opening of “new paths.” 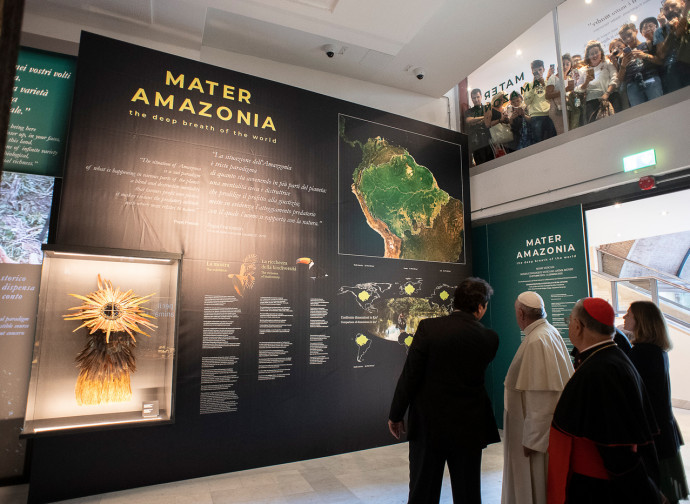 The language used by the Church’s Magisterium is one of its most important aspects. The expositive style of magisterial documents should be appropriate both in its expression of the content being taught as well as the authoritative act of the one who is teaching. It does not seem suitable for magisterial language to contain ambiguous words and phrases that are nuanced and thus open to varying interpretations, allusive rather than declarative, with an unclear structure that opens up the possibility of misunderstandings by those who  wish to learn Church teaching.

Documents that demand assent from the faithful ought to be clearly formulated, since the faithful cannot feel that they are bound to assent to the Magisterium if it presents propositions containing beautiful images, yes, but with a theological content that is merely approximate and expressed with uncertain language. In order to give one’s personal assent in matters of faith and morals, the believer must have a clear understanding of exactly what it is that he is assenting to. All the rest is just literature.

Beginning with Vatican II, the matter of magisterial language became a central problem. Ever since, it has been maintained that there needs to be a “pastoral intent” that is to be distinguished from “doctrine,” which does not eliminate the doctrine but nevertheless conditions it, the linguistic expression of Church teaching has become more imprecise. For example, if we hold certain phrases of Gaudium et Spes to the test and try to interpret them correctly, we have to refer to other passages of the same Pastoral Constitution, and then to other points of other Conciliar documents, in order to arrive finally at an understanding that is in accord with what is taught by the Catechism. In the magisterial teaching of Pope Francis, this ambiguous aspect has markedly increased.

The principal example is perhaps the Apostolic Exhortation Amoris Laetitia: its language is rich in effective images; it uses various rhetorical tools; it asks questions to which it does not give an answer; it often uses hyperbole and extreme examples; it alludes to criteria and solutions that it never makes explicit; words are used freely and equivocally, such as when, for example, the document calls cohabiting couples and same-sex unions “family situations.” By so doing, the faithful do not understand the exact teaching clearly, to the point that, as we now know, Amoris Laetitia intended to teach something that it never explicitly said. But the magisterium should not insinuate things; it should affirm them clearly.

We now know that the problem stems from the desire to give pastoral guidelines that find their origin within existential situations. It is now said, however, that precise language would only define abstract truths of faith and morals but would not be capable of addressing the concrete life situations in which they must be lived out. Likewise, it is now also said that it would be useless to teach truths with precision, because the magisterium should rather inspire reflections, comparisons and the opening of “new paths.” Once these motivations are understood, the question must be asked: is this the true role of the Church’s Magisterium? And does not language with such purposes run the risk of causing confusion?

Pope Francis’ Apostolic Exhortation Querida Amazonia uses this type of langugage,  emphasizing the use of images and the insertion of poems, environmental slogans, expressions loaded with social-justice ideology, and drastic historical judgments that are striking but seem improvised, images chosen only because they have lyrical impact:

From the high mountain range where the snows are eternal, the water descends and traces a shimmering line along the ancient skin of the rock: the Amazon is born. It is born every second. It descends slowly, a sinuous ray of light, and then swells in the lowland... (45).

In the Exhortation, four “dreams” are described, but what magisterial significance should be given to this word? The third “dream” states:

I dream of an Amazon region that can jealously preserve its overwhelming natural beauty and the superabundant life teeming in its rivers and forests (7).

What does this mean? Likewise, the statement "it is clear that the original peoples of the Amazon region have a strong sense of community“ is an expression that is striking but is also very imprecise. What does it mean "to combine ancestral wisdom with contemporary technical knowledge“ (51)? Or to recognize the Amazon "as a sacred mystery“(5)?

How on earth did the language of an Apostolic Exhortation find room for the expression “Mother Earth”? Why are poets like Neruda and de Moraes cited? Is it really necessary to use language like this in order to express the contemplation of nature:

If we enter into communion with the forest, our voices will easily blend with its own and become a prayer: “As we rest in the shade of an ancient eucalyptus, our prayer for light joins in the song of the eternal foliage” (56).

It is also strange that, while the Exhortation does not incorporate any part of the Final Document of the Synod, it says in the first paragraphs that the entire synodal process should have a harmonious, creative and fruitful reception (2); that the final document should be read in full (3); that the entire Church should strive to apply it and that it should inspire every person of good will (4). It is also strange that footnote 120 – once again a problematic footnote, just like in Amoris Laetitia – recalls that: “During the Synod, there was a proposal to develop an “Amazonian rite.” But this proposal of this rite is linked to the question of ordaining “viri probati.“