All to Mass at Anita and Karin's. It’s the independent liturgy

Lay people at the altar for a celebration identical in every way to Mass with the exception of the consecration, and for two Sundays a month a woman in a cassock and stole. In Lucerne, in German-speaking Switzerland, the dream of the layman in place of the priest and of women-priests is approaching in leaps and bounds, with the blessing of the bishops after a four-year experiment: “The women and men who serve in church have developed an independent liturgical form”. Independent from Rome, of course, and from the sacramental nature of the Mass. This happens when the clericalism of the laity is used to attack the figure of the priest with the excuse of a decline in vocations. Even if the numbers do not justify it at all. 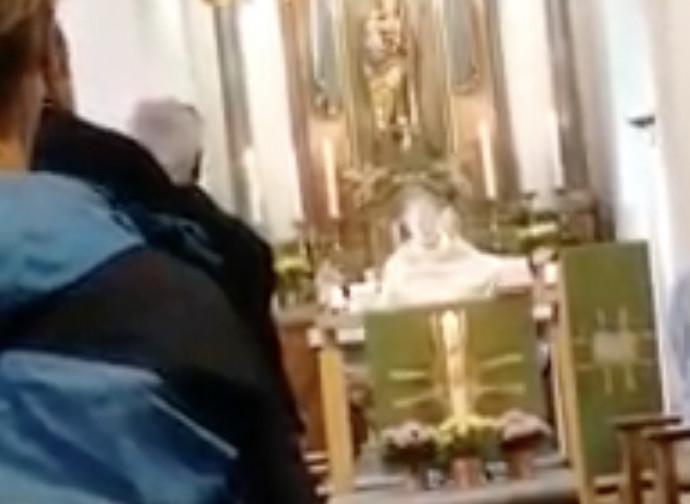 The arbitrariness in the liturgical field which includes abuses in the involvement of the laity in the offices of the clergy and in the administration of the Sacraments has reached peak levels.

Proof of this is that the Instruction of the Congregation of the Clergy for the Pastoral conversion of the Parish community presented last Monday by the Undersecretary Monsignor Andrea Ripa, was specifically conceived to limit the freedom, sometimes real abuses, with which bishops have granted the laity space that isn’t theirs, even to the participation of the office of clergy in the life of the church. At least, this is its stated object.

Was there a need for such a document, which the newspapers have instead interpreted as a sneaky green light to laity in clerical vestments? To answer this question we need to ask ourselves what is most at risk in the case of lay presence at Mass.

To understand the need for an Instruction that would put down markers in the contemporary liturgical Far West, for example, it is useful to pop over to Switzerland where for some time the laity have achieved an “independent liturgical form” with the excuse of the shortage of priests – which, as we will see, is not actually a real shortage. “Independent” from what? From Rome, of course.

In the German canton of Lucerne, for example, on Saturdays or Sundays it is not uncommon to find women “celebrating” mass dressed in sacred vestments. A complete mass, from the homily to the distribution of Communion up to the proclamation of the Preface, the final epiclesis with the exception of the words of the consecration, since the Hosts had already been consecrated previously by a priest.

We are near Lucerne, in the tourist resort of Rigi Kaltbad First. Among these enchanting mountains there is an 18th century chapel dedicated to “St. Michael in the rocks” in which every Sunday a male and a female lay parishioner in turn “celebrate” for the people.

Last Sunday it was Frau Anita Wagner's turn. Other times the meditation is entrusted to Karin Martin while next Sunday Emilio Naf will be at the altar. As you can see, it is to them that the Gottendienst is entrusted, which literally means “liturgical service”. It is not Mass, but it has everything of the Mass except the words of the Consecration. Therefore, it is far beyond the classic Liturgy of the Word which is celebrated when a priest is not available.

This is by no means new in Switzerland. In Lucerne Judith von Rotz “celebrates”. Actually, it is the conclusion of a journey of experimentation begun four years ago and just ratified now, with the official introduction of actual Sunday preachers and “accidental priests”. Let's put it this way: the dream of female priesthood is approaching in leaps and bounds.

Paul Hugentobler, deacon of the Ecclesiastical Region of Lucerne, which belongs to the Basel Region, writes: “On behalf of the Swiss-German bishops, the women and men who serve in church have developed an independent liturgical form over four years and have tried it out in their parishes. Where no priest in a parish is available to celebrate the Eucharist on Saturday or Sunday, the celebration of the Word of God must be maintained”.

The independent liturgical form also provides for mixed moments, so to speak, i.e. celebrations in which the priest is present for the proclamation of the Gospel and consecration, while the lay person is in charge of all the other parts of the Mass, including preaching, distribution of Communion and offertory prayers, collection, etc.

On the other hand, it comes as no surprise. This is the same Swiss Church where a female Bishop was chosen in a diocese. In the Swiss Church, as in Germany, every parish is a sort of small enterprise that is financed by the ecclesiastical tax: there are numerous jobs to be allocated. Those who study theology, for example, are assigned to a parish and thus have work guaranteed for the rest of their lives. So the person in charge of the celebration is not the priest, who becomes just one of many, more often than not absent, but the leitung, the director, and Mass becomes nothing more than a social event, disconnected from its intrinsic priestly dimension.

In the video, the faithful present do not seem to show surprise, a sign that, in the long run, one gets used to everything. Furthermore, the website of the diocese clearly explains who the Predgit – the preacher – is for every mass, and it is not uncommon to find women dressed in full liturgical vestments, from the cassock to the stole. Obviously this is all justified by the excuse of the lack of priests, which is becoming a license for the most improper abuses. But is this really true?

Crunching the numbers says otherwise. The Diocese of Basel is in no way different from any other European diocese that is experiencing a decline in vocations, but they are not using this excuse to adopt these paraliturgies as surrogates for the Mass. On the contrary, there are other places where the situation in some ways could be worse than in this Swiss location.

But perhaps the problem is not the shortage of priests, but rather the lack of faith that has generated such a clericalist drift in the countries under Teutonic influence. Efforts are ongoing to extend this influence to the Mediterranean area. After all, even these experiments, lo and behold always approved, are nothing more than the umpteenth blow to the priesthood, which modern man believes he is increasingly able to do without, since Mass has become nothing but a service.