The Italian Bishops’ Conference has decided to suspend all Masses in Italy with the faithful in attendance until April 3 because of the coronavirus. This is a grave and historically unprecedented decision, which sends a clear message, faith is irrelevant to people’s lives. It is a model that creates the risk of being followed by the rest of the world. The ecclesiastical hierarchy seems to be ever more dependent on the government, following the model of the “Patriotic Association” in China. “Clandestine” priests are now celebrating Mass in churches or homes with a few of the faithful in attendance, at the risk of being denounced by state officials and other priests. 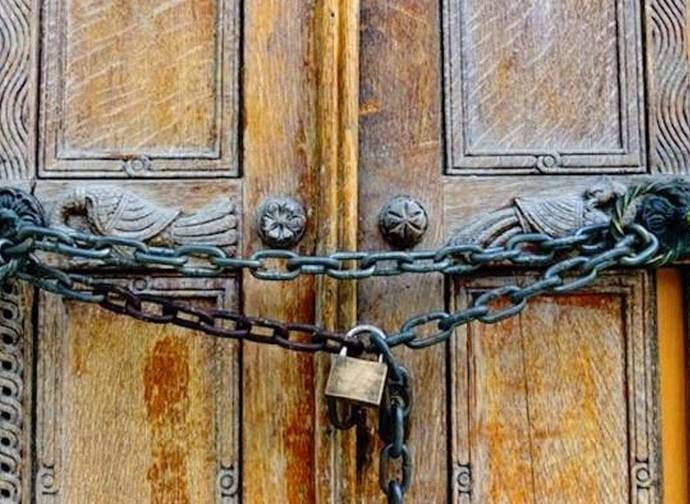 “God is not great enough to respond to our needs.” We said this in an editorial a few days ago as a way of summarizing the message to communicate the decision made by the bishops of the three Italian regions most afflicted by the coronavirus to suspend all Masses with the faithful. But now, after the decision of Sunday, March 8, by the Italian Bishops’ Conference (CEI) to suspend Masses with the faithful throughout all of Italy until at least April 3, this judgment corresponds even more accurately to the gravity of the decision they have made. What is even more concerning is the way in which the decision of the Church in Italy, the country where the Pope resides, will easily become a model for the rest of the world as the virus gradually spreads to other countries.

In this dramatic moment for Italians, with so many falling prey to bewilderment and fear, when so many are asking “How will we be saved?” and “Who will save us?”, the Church has turned it’s back and explicitly refuses to announce Christ as the one Savior. Italy – all of Italy – is closing its churches for the celebration of Mass for the first time in history. The ban will last for a month, and perhaps longer, even in areas where the number of cases of infection can be counted on one hand.

We are certain that this shocking decision will be an occasion of personal conversion for some – perhaps for many – but there remains the objective fact of a decision that sends a devastating message that the Mass has nothing to say about what matters most in life. The important thing is health, not salvation.

The Italian Bishops’ Conference has announced, in a statement issued on Sunday evening, March 8: “In recent weeks we have followed and enacted for ourselves the measures by which the Government has committed itself to opposing the spread of the coronavirus.” The Bishops’ statement continues by noting that the Decree of the Government – with which there is  “a relationship of comparison and collaboration” – “preventively suspends all civil and religious ceremonies, including funerals, throughout the whole country until April 3.” The interpretation given by the government rigorously includes Holy Masses and funerals among “religious ceremonies” that are banned. “It is a highly restrictive measure, whose acceptance will cause sufferings and difficulties for pastors, priests, and the faithful. Our acceptance of this decree is solely out of a desire to do our part in this situation in order to contribute to the protection of public health.”

One could discuss the illegitimacy of an intervention by the Italian State regulating Catholic worship. But apparently this topic has been overruled by the clear desire of the CEI to show that Catholics are good citizens who do exactly what the government expects of them. The Mass thus becomes a simple religious ceremony, a communitarian event which, as such, can be renounced if there is a need to preserve public health.

The fact that the Mass is actually the most powerful weapon that can stop the epidemic through the prayer and penance of the faithful is an idea that does not even enter their heads. They have forgotten what the history of the Church has left us – most of all in Italy – with dozens and dozens of shrines erected to thank the Lord for ending dangerous epidemics (that in fact were much more dangerous than the present one). And they have also forgotten what the Magisterium of the Church teaches about the relationship between Holy Mass and the common good.

The CEI thus accepts the orders of the government without objection, actually with enthusiasm and without even attempting to explain how the celebration of Mass could give great assistance to the government in eradicating the virus. There is no longer even a reference to “the Church as a field hospital” – the tents have been taken down, end of story. On the other hand, many of those who have most acclaimed building bridges have suddenly discovered that walls are very convenient for protecting oneself.

And, yet if they simply wanted to respect the substance of the Decree of the Italian government – avoiding large gatherings of people – the bishops could have proposed increasing the number of Masses in order to have a lower concentration of people; or required the even distribution of people in church so as to respect the distance between persons requested by the government; or called for omitting the Sign of Peace; or even have gone so far as to not distribute the Eucharist, inviting the faithful present to make a spiritual communion; or committed to having shorter Masses; and who knows what else could have been done. There are many ways in which the government decree could have been respected without suppressing the Holy Mass, especially since similar solutions have been adopted for so many other activities.

Some bishops have stated in their communications: there is no Mass; pray more at home. This is understandable, but in the long run it will turn out to be a boomerang suggestion: after all, the message is that reading the Gospel at home can replace going to Mass. And if this is being done in Italy, where the Pope is, what will happen in other countries as the coronavirus spreads around the world? They will copy Italy, obviously. This is likely to be a catastrophe.

Reading the statement of the CEI gives the strange and disturbing sensation that we have an ecclesiastical hierarchy that thinks of itself as an emanation of the government, formally autonomous but in reality subjugated to it. The Chinese model now seems to be prevailing in the Italian Church: a “Patriotic Association” of Catholics that depends on the government, that makes decisions – and now even liturgical decisions – based on the needs of the government. It is a church that never truly contests any decision of the (left-wing) government even if it goes against life, family, and freedom of education. It is a hierarchy that, in order to preserve the money which flows in to it from taxes paid by its citizens, continually feels the need to demonstrate how great it is in educating Catholics to be good citizens who are obedient to all the harassments of power.

It is therefore no surprise that, alongside the “Patriotic Association,” there are now “clandestine” priests spontaneously arising, who are celebrating Mass in churches or homes for a few of the trusted faithful so as not to draw attention. Yes, because here in Italy just as in China there are now diligent state officials who patrol the churches, if not the Mass itself. And just like in China we find there are informer priests who get their brother priests in trouble if they celebrate Masses for small groups of people. There are many reports now of this happening.

It is true that so many viruses come from China, but Covid-19 is certainly not the most dangerous.