Air chaos, travellers grounded to the delight of the Greens

In these summer days if you happen to miss a trip because your flight is cancelled, if your luggage is lost at the airport, if your departure is hours late, you are not alone. The phenomenon is worldwide. And the cause is also political: environmentalism that is 'ashamed' of air travel and is beginning to translate into policies against airlines. 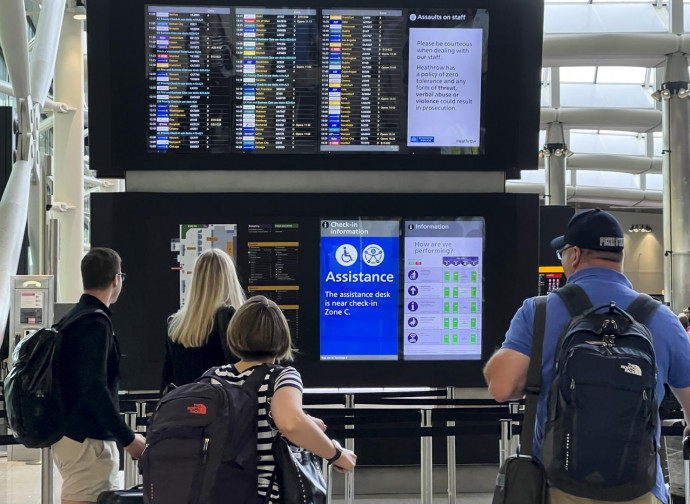 In these summer days if you happen to miss a trip because your flight is cancelled, if your luggage is lost at the airport, if your departure is hours late or your journey takes nine or ten times longer than expected, you are not alone. And for once, you are not the victim of Italian-only inefficiency. All over the world, in fact, there is a serious crisis in air travel.

Among the major airports (outside Italy), Toronto Pearson International records 52.9% of departures with delays of more than 15 minutes, Frankfurt 46.4%, Paris Charles De Gaulle 42.8% and London Heathrow 40.2%. In addition to delays, the risk of cancellations is higher. The record, in this case, is held by Newark Airport (serving the New York metropolitan area) with 7.8% of cancelled flights. In this very hot period, for those flying for work or holiday, the high temperature is therefore not the greatest cause of suffering, as they have one chance in two of leaving late and in the worst cases almost one in ten of being grounded. Even if they do leave, they run a greater risk of losing their luggage: compared to the previous year, the loss rate increased by 30% this summer. Not to mention the frequent strikes, not only in Italy, of ground staff. In addition to the fact that protests such as that of the taxi drivers last week, in Italy, do not allow people who do not have a car or do not have public transport nearby to reach the airport (or to return home). A disaster, in short, that risks compromising the restart of tourism after two years of forced closure for the pandemic.

The causes of this crisis in air travel are both natural and political. But on closer inspection they are mainly political. The 'natural' cause is in the drastic job cuts during the two years of the pandemic. With planes grounded and passengers reduced to a minimum, airlines have laid off a lot of staff, but are unable to rehire the necessary staff in time to take advantage of the holiday season. At Heathrow, for example, 80 to 85% of travellers have returned compared to pre-pandemic levels, but the airlines' ground staff is still reduced to 70%. Qualified, newly recruited staff need months to be trained. Flight personnel need even more training and investment from the airlines. The difficulty in finding or re-finding the necessary personnel is proof that employees with years of experience have found other jobs in the last two years while they were on the ground. Besides the fact that the appearance of new variants of the virus and the consequent new restrictions imposed by governments have generated many false starts, forcing companies to postpone plans to relaunch their activities.

But let’s consider the political aspect, which is the root cause of the crisis. Flights were reduced to a minimum, not so much because of the fear of a pandemic, but because of the closure of international borders, because of the lockdown imposed by the governments of almost the entire industrialised world. Planes were the most penalised, in relation to the safety they could offer (better air circulation than trains and public ground transport).  And the airlines are still subjected to ideological harassment by ecological parties and movements. The pandemic has been seen as an 'opportunity' to get rid of air transport, which is responsible for the highest CO2 emissions: 2% of the total. Before Covid, Greta Thunberg had set a personal example by sailing to New York. In Sweden, in 2018, the Flygskam movement, which literally means 'flight shame', was born, inspired by her trip.

During the pandemic, CO2 emissions decreased significantly, partly due to the fact that aircraft were grounded. The world of natural sciences was the first to advocate a change of habits, permanent and not only dictated by the virus. Articles such as Rethinking travel in a post-pandemic world, published in Nature on 5 January 2021, suggest more teleconferencing and less travelling for those who have to organise or attend business meetings. 'Travel less' has always been a slogan of the Greens. The most radical environmental movements, such as Extinction Rebellion, have called on governments not to grant compensations to the airlines. And countries like France have granted them, but only in exchange for verifiable plans to drastically reduce emissions, as demanded by other more 'moderate' environmental movements like Greenpeace. In recent months, the airline crisis is aggravated by a series of environmentalist causes. On 6 July, for example, three Dutch associations sued KLM, guilty of advertising itself with what the accusing ecologists believe to be “misleading claims that it is making flights sustainable”. In neo-language, KLM is allegedly 'greenwashing', i.e. pretending to be ecologically sensitive. Politicians are very receptive to these issues and the idea of imposing 'green taxes' on tickets is back in fashion in the pandemic years and will be increasingly adopted by Western countries that are signatories to the Paris agreements, especially France. In the European Union, in general, airlines are once again in the crosshairs because they fail to meet the permitted emission quotas and fall far short of de-carbonisation targets.

The air transport market is therefore increasingly difficult due to this series of hostile political (and not economic) initiatives: environmentalist movements directing public opinion, repressive ecological policies, and artificially increasing costs. Consequently: discouraged investment, more difficulties in hiring new qualified personnel, all on top of two years of pandemic crisis. The people crowding the airports, however, are proof that no one has really “rethought the way we travel”. Ordinary people still want to get from one point to another on the planet, quickly and at the lowest possible cost. And only a few wealthy idealists who play truant from school (and call it a 'strike') can think of sailing across the Atlantic.