Aggression and defence: what doctrine says about war

What does the Social Doctrine of the Church have to say about war? There is no right to a war of aggression, and even a war of defence is subject to very demanding criteria. War of aggression is always to be condemned and the right to legitimate defence is always to be confirmed. However, the latter must be proportional and there must be "well-founded conditions for success" in order to continue fighting. 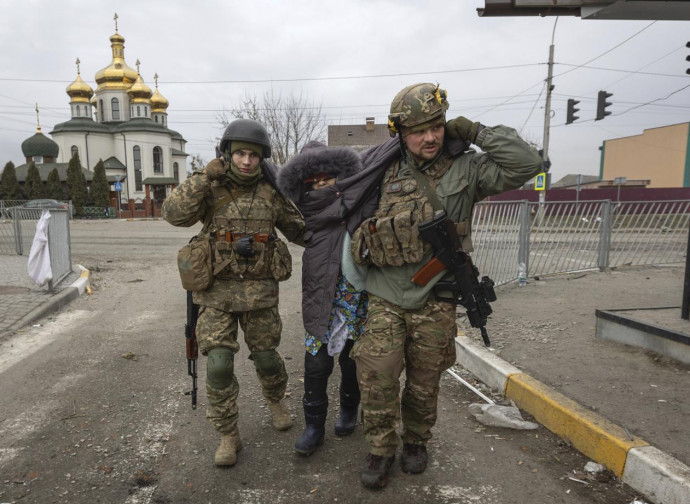 In his Angelus homily on Sunday 6 March, Pope Francis once again called for peace in Ukraine: "I thank all those who are taking in refugees. Above all, I implore that the armed attacks cease and that negotiation and common sense prevail. And that we return to respect for international law!". And on the direct commitment of the Vatican: "The Holy See is willing to do everything, to put itself at the service of this peace. In these days, two cardinals have gone to Ukraine to serve the people, to help. Cardinal Krajewski, almoner, to bring aid to the needy, and Cardinal Czerny, acting prefect of the Dicastery for Promoting Integral Human Development. This presence of the two cardinals there is the presence not only of the Pope, but of all the Christian people who want to get closer and say: "War is madness! Stop, please! Look at this cruelty!".

The Social Doctrine of the Church has dealt a great deal with peace and therefore also with war. At this time of danger and tragedy we can once again draw on its criteria of judgement. It is important to try to understand the facts and the behaviour of the players and to study the antecedents of conflicts, but in order not to get lost in the complexity of the case studies, it remains essential to refer to the principles. The Social Doctrine of the Church gives its teachings in the light of natural law, elevated and purified, but never denied or suffocated, by the evangelical morality of the beatitudes.

War can be of aggression or defence. A war of aggression is always to be condemned and the right to legitimate defence of the homeland must always be confirmed, as must the right to legitimate defence of the family against those who seriously threaten it. The use of weapons, even in the case of a clear defensive motive, is still subject to ethical limits. The damage caused by the aggression must be “lasting, serious, and certain”. It is also required that all necessary steps to avoid the need to use weapons also in defence have been taken unsuccessfully, that there are “well-founded conditions for success” to avoid the sacrifice of an entire nation and, finally, that the use of weapons does not cause greater damage and disorder than the evil to be avoided. The two main criteria are therefore necessity and proportionality. There is no right to a war of aggression, and even the war of defence is subject to very demanding criteria.

The right of nations to defence may allow forms of alliances between states so that even the weakest can be protected. Defensive alliances, however, must not turn into offensive alliances that threaten peace. The use of armaments for defensive reasons must not take place while neglecting the duty to strenuously seek international agreements for balanced and progressive disarmament. The possession of armaments for defence purposes is therefore not indifferent from a moral and political point of view, as if the question arose only of their use. Possession is not an independent variable; it finds its legitimacy in the never-ending effort to agree on progressive disarmament in order to also reduce the limits of possession. The two criteria of necessity and proportionality therefore concern not only the use of weapons but also their possession, in the commitment to progressively raise the threshold of the two criteria. Without this real commitment, the arms race becomes guilty. The accumulation of weapons for deterrence purposes, i.e. to deter or dissuade opponents from possible aggression, is also invalid. Deterrence becomes a spur to the pursuit of ever greater armaments and increases the danger.

The Social Doctrine of the Church has placed very strict limits not only on the start of a war but also on the use of weapons after a war has broken out, on whichever side in the conflict. In accordance with international humanitarian law, civilians must be preserved, both by any aggressor and by those organising defensive military action. The use of civilian militias and civil resistance, especially the use of women and children, must be avoided by the warring parties. Those seeking refuge in other countries to escape the war in their own country must be able to count on safe passages and the help of the international community. Particular care must be taken not to break up families.

It is possible that a minority is under serious threat not only to its freedom but also to its very survival. In such cases, the international community has a duty of humanitarian intervention, on the basis of which it can intervene to protect the victims and to prevent systematic violence that can even result in genocide. In these very serious cases, the sovereignty of states may not be respected, but great care must be taken because humanitarian intervention is not a right, it is a duty. It is therefore subject to the general principles that make war legitimate, as mentioned above, as well as to international law.

Sanctions, especially economic ones, can only be imposed under certain conditions and for certain purposes. They must lead to negotiation and dialogue, they must not burden the population as an indiscriminate punishment, they must be limited in time, wisely monitored so that they do not make the entire population suffer.

Every war has a story behind it. It is a series of misunderstandings, violence and injustices that have accumulated and become "structures of sin" (John Paul II). Iniquities produce damage over time and leave traces that weigh on the future. We must go back, look at the past, clarify it in the light of reason and forgive it in the light of faith. Atheistic and inhumane political ideologies have been and still are great causes of wars. Checking and purifying the past also involves freeing oneself from them. Europe, in particular, is still heavily burdened by them and this has led and still leads to forms of European “civil war” that must be overcome.